Ribbon-cutting, jets overhead and a dinner in a new, billion-dollar headquarters: Donald Trump’s first meeting at NATO on Thursday (24 May) is being choreographed to impress a US president who called the Western alliance “obsolete”.

In a fortuitous twist, a series of NATO goals including a new HQ and expansion to include new member Montenegro have coalesced around Trump’s visit, which officials have kept free from the dense policy debates of their biennial summits.

“This is the moment to remind Trump that he’s the leader of the free world,” said a senior NATO diplomat involved in the preparations. “Gravitas is what the alliance does best.”

In that vein, Trump, a New Yorker, is expected to unveil a memorial to the 11 September 2001 attacks, placed at the entrance to the new NATO building that has been almost two decades in the making at a cost of €1.1 billion.

#Trump to unveil sculpture at new #NATO headquarters made of metal from World Trade Center during May 25 summit https://t.co/N2A2FBwDP1 9/11 pic.twitter.com/WiVpU2V7g7

NATO officials hope the steel wreckage from one of the Twin Towers will remind Trump that the only time the alliance has activated its collective defence clause was following the attacks on New York and Washington, a decision that also sent NATO into Afghanistan to fight the militants behind them.

Date set for inaugural meeting of North Atlantic Council at new NATO headquarters in Brussels: 25 May 2017. Heads of state/govt. pic.twitter.com/XPISCeGnpT

With no final communiqué and a meeting consisting only of dinner with NATO allies rather than sessions including non-members partners such as Sweden and Ukraine, diplomats say the alliance is playing up the pomp rather than new policies.

It is not unique: NATO leaders welcomed new US President George W. Bush in 2001 with an informal lunch and some policy discussion, while President Barack Obama’s first months in office in 2009 coincided with a scheduled NATO summit.

But it will be more spectacular, with allied jets due to fly over Trump and other leaders at the opening of NATO’s new HQ.

Expectations have been set low, even after Trump last month withdrew his earlier charge that the North Atlantic Treaty Organisation was “obsolete” because it was not “taking care of terror”.

Trump ripped into US allies during his election campaign, accusing them of not paying their fair share. After taking office, he sent his defence secretary to Brussels with an ultimatum to pay up or risk losing support.

“Europe knows Trump has a fundamentally negative view of alliances,” said Tomáš Valášek, a former Slovak ambassador to NATO and now head of think-tank Carnegie Europe. “The hope is that he comes away with a more positive view of NATO, that he realises he has allies’ time and their respect.”

Baltic allies and others alarmed by Russia’s 2014 annexation of Crimea want much more, however. They seek a public commitment from Trump to stand by NATO’s Article 5 defence clause that states that an attack on one ally is an attack on all, although it is not clear if they will raise the issue with Trump.

Trump’s “America First” rhetoric, his conflicting signals on Russia and his shifts on NATO have left European governments at a loss, despite support from senior officials including Vice President Mike Pence, who visited the EU and NATO in January. 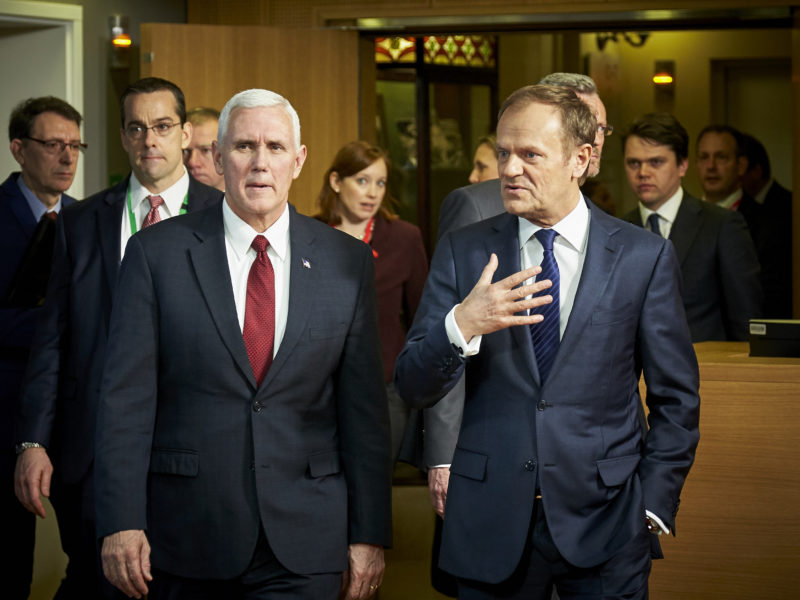 “There is uncertainty, there is a need to dispel some of this confusion,” said Pierre Vimont, a former head of the European Union’s foreign service. “They (European leaders) want to have some reassurance,” he said.

To nudge Trump in that direction, European allies will tell Trump over dinner they agree to spend more on defence, going some way to account for the sharp drop in Europe’s military budgets since the fall of the Soviet Union.

At an oval table with NATO leaders, Trump is due to hear that each ally will present a plan by the end of the year explaining how they will reach a 2014 goal to spend 2% of economic output on defence every year by 2024.

As in most NATO meetings, a three-minute speaking rule applies and diplomats aim to keep the message from allies sharp.

Only the United States, Britain, Poland, Estonia and Greece met the NATO spending target in 2016, although the cuts have stopped; Latvia, Lithuania and Romania are close and France has broad operations underway in Africa and the Middle East.

By current standards, Washington funds about 70% of NATO spending, although all countries share the costs of running the alliance’s day-to-day administration and building costs.

The final part of NATO’s charm offensive hinges on its response to a plan by US officials for NATO to take a bigger role in the fight against Islamic State in Syria and Iraq, in line with calls from Trump for the alliance to do more to combat terrorism.

Not yet agreed because France and Germany have reservations, diplomats still hope to reach a compromise before the summit that would see all 28 allies agreeing for NATO as an institution to join the coalition without committing to obligations beyond those already undertaken by its members.

That would give Trump something to take back to Washington to show Americans NATO is responding.

“This is not about policy, it’s about political messaging,” said a second senior NATO diplomat. “Let’s make Trump happy.”