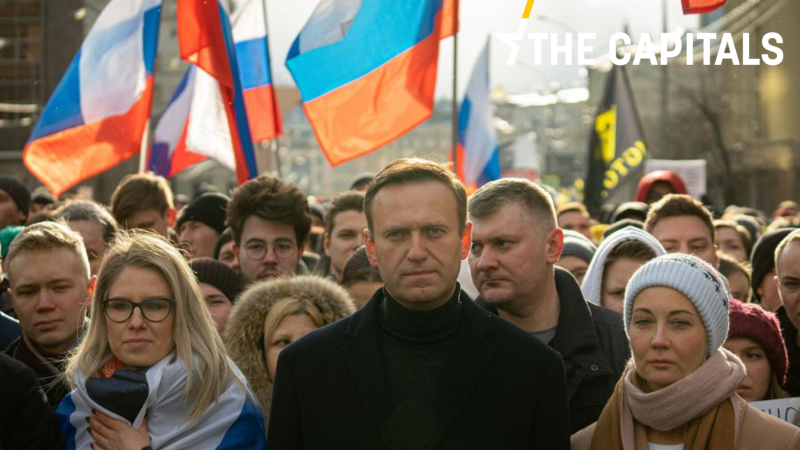 The Kremlin critic was brought to the hospital in Omsk, Siberia on Thursday morning (20 August), after he lost consciousness on a flight bound for Moscow. [Shutterstock/Gregory Stein]

Before you start reading today’s edition of the Capitals, feel free to have a look at an interview with Piotr Kramarz, deputy Chief Scientist at the European Centre for Disease Prevention and Control (ECDC): “EU agency not worried about COVID-19 mutations”

Also take a look at a series of streamlined overviews on what is coming up at the legislation level, from agriculture and transport to energy and digital.

“All aboard: EU policy train builds up steam after summer”

After a summer break plagued with changing measures and updated travel lists across Europe, we would like to welcome you back with this edition of the Capitals Brief. Stay tuned for more interesting and cutting-edge content from our European network of newsrooms!

Navalny arrives in Berlin. Currently in a coma after a suspected poisoning, prominent Putin critic and anti-corruption activist Alexei Navalny arrived in Berlin to be treated in the city’s Charité Hospital over the weekend, during which he will be placed under German federal police protection. EURACTIV Germany’s Sarah Lawton reports from Berlin.

Stimulus package postponed. While the stimulus package “is ready” according French government spokesperson Gabriel Attal, the country’s executive decided to give priority to preparing for the start of the new school year. Much awaited by companies, the details of the €100 billion plan will now be announced at the beginning of September rather than the promised 25 August. The opposition, however, has criticised the postponement. “Giving priority to COVID-19 (…) before the start of the new school year and the return to work, is necessary,” explained Health Minister Olivier Véran. (Anne Damiani | EURACTIV.FR)

Johnson’s emergency plans. UK Prime Minister Boris Johnson’s government is making contingency plans for if a second coronavirus spike coincides with a no-deal Brexit. According to a Cabinet Office paper leaked to The Sun, the government’s ‘reasonable worst-case scenario’ prepares for the possibility of medicine shortages, and fuel and power shortages, while the military could be required to airdrop food to the Channel Islands and the navy utilised to prevent clashes between British fishermen and European fishing boats in UK waters. EURACTIV’s Benjamin Fox has more.

BRUSSELS
Number of COVID-19 infections decreasing, but not in Brussels. In the week of 14 to 20 August, an average of 493.3 infections per day were registered, according to data from the Sciensano health institute. That is a decrease of 15% compared to a week earlier, with the average number of new infections having now fallen for the eighth day in a row. (Alexandra Brzozowski, EURACTIV.com)
///

VILNIUS
International conference on Belarus. Over the weekend, Lithuania hosted a two-day international conference on the situation in Belarus, organized by the Lithuanian parliament, the Lithuanian Ministry of Foreign Affairs, the European Parliament and various international organizations, involving politicians, political scientists and the Belarusian opposition.
“At a time when the Belarusian people are fighting for their rights, fighting for democratic elections, the ability to influence events in their own country, support for the countries of the region and democratic European institutions, but also transatlantic support,” Polish MEP Anna Fotyga told the Polish press agency PAP. “We want to listen to the Belarusian people.” Read more: Tens of thousands in Lithuania form human chain for Belarus

Sicily challenges Rome on migrants. On Sunday (23 August), Sicily’s governor, Nello Musumeci, signed an ordinance closing the island’s migrant centres and banning new migrants from arriving to curb the spread of the coronavirus.

“By midnight on Monday, all migrants in the hotspots and in every reception centre in Sicily will have to be transferred to structures outside the island”, said Musumeci, noting that “it is not possible to guarantee a visit to the island while respecting measures to prevent infections spreading.” . EURACTIV Italy’s Valentina Iorio looks into the government’s response.

Legality of extraordinary corona-measures questioned by Madrid judge. A ruling from a Madrid judge that scrapped the regional government’s new coronavirus restrictions, which included a ban on smoking in public places and the temporary closure of night clubs, has thrown up questions about the legality of implementing such extraordinary measures, EURACTIV’s partner EFE reported.

A crucial week. German Foreign Minister Heiko Maas will visit Athens on Tuesday (25 August) for talks on Turkey with his Greek counterpart Nikos Dendias. The same day he will also visit Ankara as Germany pushes for dialogue between the two countries, whose relations have deteriorated significantly over gas drilling in the Eastern Mediterranean.

On 27-28 August, a meeting of EU foreign ministers will discuss a “toolbox of options” that the Commission will put forward in order to deal with Turkey’s aggression in the region. Athens has asked for sanctions targeting Turkey’s economy. However, at least publicly, EU officials avoid using the word “sanctions”. It also seems that there is no unanimity in the EU Council to impose sanctions. (Sarantis Michalopoulos | EURACTIV.com)

Dialogue or go to the court. Cypriot foreign affairs minister Nikos Christodoulides said yesterday that Turkey should either sit down and discuss the demarcation of maritime borders between them or take the case to international courts.

“If Turkey feels so confident about its legal position, and that its actions are based on international law, this proposal will enable these arguments to be considered before a court. Turkey can not continue to use the policy of non-recognition of Cyprus as a pretext for not participating in such negotiations,” Christodoulides said. (Sarantis Michalopoulos | EURACTIV.com)

While the government has not yet clarified how it wants to finance such a plan amid the coronavirus crisis, the opposition already criticised the move as being part of the governing parties’ pre-election campaign ahead of regional and senate elections scheduled for 2 October. (Aneta Zachová | EURACTIV.cz)

“Western Europe had given up on a Christian Europe, and instead experiments with a godless cosmos, rainbow families, migration and open societies”, said the prime minister during an event inaugurating a monument commemorating the Treaty of Trianon, which gave two-thirds of Hungary’s territories to neighbouring countries after the First World War.

In other news, Orbán announced that Hungary will tighten border crossing rules from 1 September to prevent the spread of the coronavirus as the number of new infections is rising in neighbouring countries. (Željko Trkanjec, EURACTIV.hr)

WARSAW
Poland to install new COVID-19 flight bans. Poland’s government is planning to extend its international flight ban to 63 countries from Wednesday (26 August), increasing it from the current 44 states. The new rules would constitute one of the EU’s strictest flight regimes, according to the Gazeta Wyborcza daily.
Among those to be added to the no-go list are European countries such as Spain, Belgium, Romania and Malta. However, Russia, China, Singapore and Serbia are to be removed, meaning flights to those destinations will be able to resume. The list is still a draft proposal, with the final version to be officially issued on 25 August. (Alexandra Brzozowski, EURACTIV.com)

The biggest news of the summer. For the first time in modern history, a member of Serbian political party (SDSS) attended the celebration of the military operation Storm (5 August), which liberated parts of Croatia and made conditions for operations in Bosnia and Herzegovina (BiH) that led to the Dayton Agreement.

Boris Milošević, vice president of the new Croatian government led by Croatian Prime Minister Andrej Plenković told the ceremony that “the spiral of hatred should be cut so that the horrors of war never repeat.” “I heard messages of peace and reconciliation, and I think that this is the first step. I consider my arrival here as an investment for the future,” Milošević added. Serbian leaders condemned the vice-president’s move, saying he was supposed to come to Belgrade to get permission for it.

In other news, Vienna introduced strict controls on Saturday (22 August) at the border with Slovenia because of the coronavirus, causing some “noise in the communication channel” between Croatia and Austria and resulting in traffic jams that did not clear even on Sunday morning. “We believe that we will soon find a solution, for the benefit of all travellers, so that they reach their destinations as soon as possible”, announced Croatia’s foreign affairs ministry. (Željko Trkanjec, EURACTIV.hr)

46 days of anti-government protests in Bulgaria. Sunday was the 46th day in a row of protests in Bulgaria, where thousands of protesters continue to call for the resignation of the government and the general prosecutor. President Rumen Radev is also calling for the government’s resignation and wants “the Mafia out of executive power and the prosecution”. EURACTIV Bulgaria’s Krassen Nikolov looks into how Prime Minister Boyko Borissov and his ruling party GERB are taking the heat.

Who can have a holiday in Croatia? Slovenia’s government decided on Thursday to put Croatia on its “red list” given the country’s epidemiological situation, dealing an unexpected blow to several hundred thousands Slovenian tourists in Croatia.

While travellers entering Slovenia from there will now have to undergo a 14-day quarantine, Slovenian government spokesperson Jelko Kacin had spent all of his holidays on the Croatian island of Krk and returned to the island the weekend before the announcement, before which he had already returned to Slovenia, EURACTIV.hr’s partner, daily Jutarnji List, reported. (Željko Trkanjec, EURACTIV.hr)

In other news, Serbian Foreign Minister Ivica Dačić said on Friday (21 August) that the “option” presented by US presidential candidate Joe Biden would not be better for Serbia than “this one,” but stressed that Serbia did not interfere with US elections.

“It is a matter for the Serbian American citizens who live there. They are aware who said what and chose which options in the past, and this made a majority of votes in the last election go to Trump,” the foreign minister told Happy TV. Read more.

We want our money back. Bosnia and Herzegovina (BiH) had to return €2.6 million to the governments of Sweden and Denmark, a sum which the two Nordic states donated so that BiH could invest into its public administration reform projects. Read more.

Fifth time’s the charm? Parliamentary elections to be held on 30 August will be the eleventh since the introduction of the multiparty system in Montenegro, and the fifth since independence was restored in 2006.

According to the polls, the Democratic Party of Socialists (DPS) will obtain 35% and opposition pro-Serbian bloc “For the future of Montenegro” can count on 25%. Đukanović will eventually remain in power as a leader with the longest mandate in Europe as he became one of the Montenegro leaders in 1987. EURACTIV Croatia’s Željko Trkanjec digs deeper.

Draft law to protect KLA values not adopted. A draft law that aims to protect the values of the Kosovo Liberation Army (KLA) – which was an ethnic-Albanian militia that fought for the separation of Kosovo from the Federal Republic of Yugoslavia (FRY) and Serbia during the 1990s – was not passed in the Assembly of Kosovo as it was only backed by 35 MPs.

The embassies of the US, Germany, Switzerland, as well as the EU and OSCE offices, objected to the draft law because they believe it endangers the freedom of speech and the rights of citizens. (Željko Trkanjec | EURACTIV.hr)

Another huge concession for Albanians. The leader of Social-democratic party of North Macedonia (SDSM), Zoran Zaev, has obtained a mandate to form a government together with the biggest Albanian party DUI, following the parliamentary elections held on 15 July, after these were postponed in April due to the pandemic. EURACTIV Croatia’s Željko Trkanjec has the details.