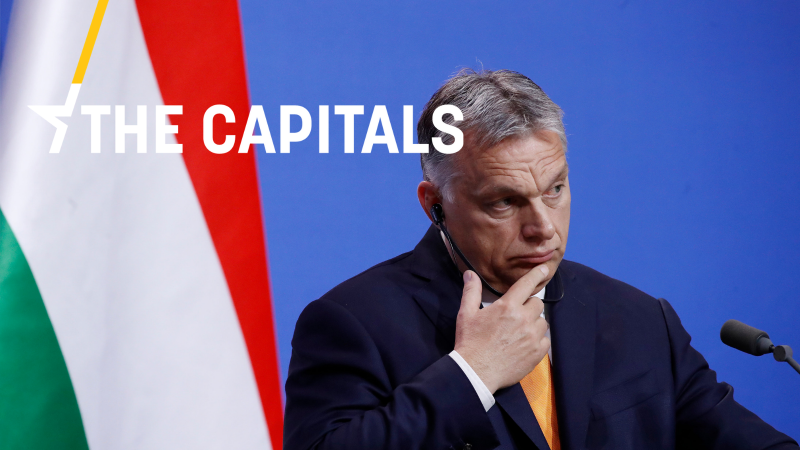 According to Grosse-Brömer, Orban’s decision was a “serious mistake”, adding that in that case you should “never stop a traveller from leaving.”

Shortly after his Fidesz party’s membership of the EPP was suspended in March, Orban said the centre-right family could organise a strong campaign and “continue to support Mr Weber as Spitzenkandidat”. Earlier this week, Orban said Italy’s Matteo Salvini was the best EU politician.

“If we reject him, then we are pushing him into the arms of Salvini,” a CDU politician told EURACTIV.de in February. (Alexandra Brzozowski, EURACTIV.com)

‘Grand Theft Europe’. Fraudsters are robbing Europe’s citizens of €50 billion in tax money each year, a joint investigation by 63 reporters from 30 countries working under the leadership of German non-profit media CORRECTIV have revealed.

The losses are made worse by a lack of cooperation between EU member states, according to the findings, with Germany obstructing joint measures in fighting the tax fraud, while being at the same time the biggest victim of the EU’s massive ‘VAT carousel’ fraud. (Claire Stam, EURACTIV.de)

UKIP under investigation: Police in the UK confirmed on Tuesday that they have opened an investigation into controversial UKIP candidate for the EU elections, Carl Benjamin, who has come under fire for controversial ‘rape’ comments directed at Labour MP, Jess Phillips.

Benjamin, a far-right activist and YouTuber, defended himself against previous allegations in a recent video, in which he said that “nobody’s got that much beer,” to want to sexually assault Phillips.

UKIP, meanwhile, continue to suffer in the polls, after having lost around 80% of council seats it had defended in last week’s local elections. It faces a near total wipeout at the European elections on May 23. The party’s leader, Gerard Batten, is due to step down in June. (Samuel Stolton, EURACTIV.com)

Red card to Timmermans. The joint list of the French Socialist Party and the leftist Place publique party has rejected the Party of European Socialists (PES) lead candidate for the European elections.

“We need a candidate that represents the left and the Greens at the same time, like the Belgian candidate Paul Magnette,” he said, adding that Timmermans is too liberal on the economy. (EURACTIV.fr)

Budget headaches. When the new Belgian federal government takes office after the May elections, it will inherit a €6.3 billion gap in the budget, according to spring forecasts of the European Commission.

“In the coming years, Belgium will have to cope with the rising costs of aging and the need to invest to meet the challenges of the future,” budget minister Sophie Wilmès said, blaming finance minister Johan Van Overtveldt for not taking sufficient corrective budgetary measures. (Alexandra Brzozowski, EURACTIV.com)

That comes as a surprise considering that before the elections, Casado had rejected any kind of dialogue on the topic outside the Spanish constitutional framework.

However, Casado warned that the PP would remain “very vigilant” in case of “any concessions” to the Catalan separatists by the socialists. (EuroEFE.EURACTIV.es)

Lagging behind. Italy is the lowest performing EU country on growth, investments and employment, according to the European Commission’s Spring Economic Forecast. Although the economy shows signs of bottoming out, weak growth and increased spending will weigh on public finances in 2019, leading to an increase of the deficit to 2.5% of GDP, the document suggests. (Gerardo Fortuna, EURACTIV.com)

Relief measures. Greek PM Alexis Tsipras announced on Tuesday a package of anti-austerity measures, including tax cuts and benefits for low-income pensioners. Greece concluded its bailout program last August and has been outperforming the fiscal targets agreed with its international lenders, giving it room for such measures in an election year. Most of the new measures will come into effect between 2019 and 2021. (Theodore Karaoulanis, EURACTIV.gr)

Duda goes to the US. Polish president Andrzej Duda will visit the US in June and he is expected to meet Poles in San Francisco. It remains unclear, however, whether he will meet President Trump even though they have plenty to discuss, including security and the possibility of permanent US military presence on Polish territory.

The first conclusions on the latter are due in September. Duda will visit New York the same month for the annual UN Assembly meeting.   (Łukasz Gadzała, EURACTIV.pl)

Nuclear ‘war’. Slovakia’s nuclear power has once again caused a spat with Austria. Chancellor Sebastian Kurz said his government would do anything to block the expansion of the Soviet-era Mochovce plant, prompting Slovak Prime Minister Peter Pellegrini to accuse him of interfering in Slovakia’s sovereignty.

Austria has raised safety concerns, which the Slovak operator, government and nuclear watchdog has rejected as unfounded.  (Pavol Szalai,EURACTIV.sk)

Fighting the drought: In the next ten years, the Czech government plans to invest almost €1 billion in the interconnection of water supply systems and €200 million in their restoration. Together with EU funds, there could be almost €2 billion reserved for water deficiency solutions. These projects fall under the promised National Investment Plan, which has been labelled by the opposition as “a false promise”. (Ondřej Plevák, EURACTIV.cz)

Oil and gas drillings and Allah. Cypriot president Nicos Anastasiades has described Turkey’s decision to start exploratory drilling for oil and gas off Cyprus as a “second invasion” and  a violation of international law. Nicosia has the full support of the EU, US and Israel.

On the other hand, Turkish President Tayyip Erdogan “wished Allah” to enlighten those who do not see the US involvement in the region and Washington’s actions against Ankara. (Theodore Karaoulanis, EURACTIV.GR)

Freedom of speech in decline. Bulgaria’s media scene is a patchwork of outlets used to advance owner interests and handicap rivals, according to the Media Sustainability Index (MSI) of the Washington based NGO IREX.

New spat over Sibiu invitations. The latest dispute between President Klaus Iohannis and the ruling centre-left PSD party centres on the invitations to the EU Sibiu summit. PSD leader Liviu Dragnea said Iohannis did not invite Prime Minister Viorica Dancila to the informal summit because of ”lack of patriotism” and ”political greed.”

Iohannis replied that all discussions would take place in the EU Council format, where the president will represent Romania, but everyone is free to come at the concert in the Grand Place of Sibiu ”for the fun part.” (EURACTIV.ro)

Croatia fails on waste. Mirela Holy, independent candidate of the SDP (S&D) list for the EU elections and former minister of ecology, has said that Croatia has not fulfilled any EU waste directive objectives.

The right-wing Most party said Croatia was the EU laggard when it came to utilising available EU funds on waste management. (Željko Trkanjec, EURACTIV.hr)

Prime Minister Marjan Šarec said he expected an explanation by Friday but does not expect Erjavec to resign. (Željko Trkanjec, EURACTIV.hr)

Mali said €46 million was earmarked for modernising tax administration, €44 million for improving e-government and €35 million for advancing trade and transportation benefits in the Western Balkans. (Beta-EURACTIV.rs)