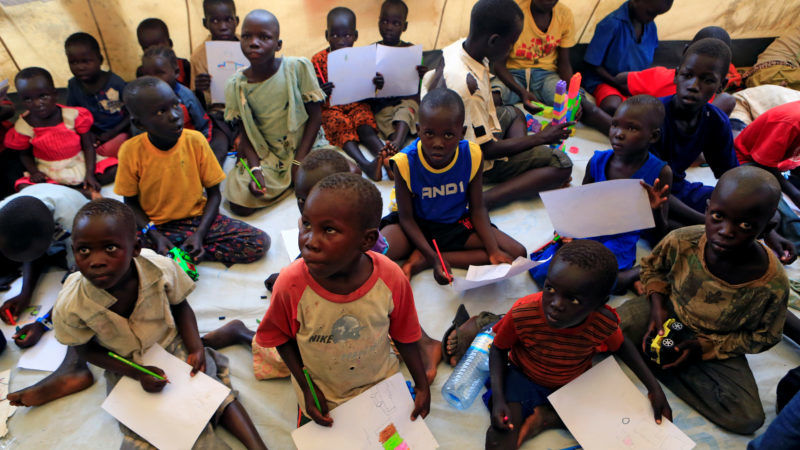 A total of 1.9 million refugees from South Sudan have fled conflict and streamed into neighbouring countries. As of August 2017, 1 million of those refugees have migrated to Uganda. A total of 62% of the refugees are children, 86% are woman and children.

Fighting persists in parts of South Sudan despite multiple ceasefire agreements. Rebel forces said on 15 August they had reclaimed their stronghold of Pagak in the northeast, less than a week after being pushed out by government forces.

Both sides have committed serious rights violations, including murder and rape, against civilians, according to UN investigators.

The UN officially confirmed today (17 August) that the number of South Sudanese refugees sheltering in Uganda has reached 1 million. Ugandan officials say they are overwhelmed by the flow of people fleeing South Sudan’s civil war and the UN refugee agency is urging the international community to donate more for humanitarian assistance.

Over one million S. Sudan refugees in Uganda – UN-https://t.co/v58Sd6SWG5 pic.twitter.com/yOzonVDheZ

Uganda, in particular, the West Nile region, has a long history of hosting refugees from the neighbouring countries of Democratic Republic of Congo (DRC), Sudan and the present-day South Sudan. Since 2014, Uganda has witnessed a continuous influx of South Sudanese refugees fleeing from violence and destruction. As of June 2017, the United Nations High Commissioner for Refugees (UNHCR) had registered more than 950,000 South Sudanese refugees (mainly women and children) in Uganda who are resettled into the various settlements in the countryside of Uganda.

World Vision, a Christian relief, development and advocacy organisation dedicated to working with children, families and communities worldwide, has been on the ground responding refugees in northern Uganda since 2014.

The 36-page study, for which 1,135 respondents have been interviewed, finds that food scarcity among the refugees and the host communities are driving prices of essential food items. Both communities have resulted in reducing meals and relying on less expensive foods to cope with the situation.

The majority of the refugees rely on food assistance for their livelihood. In total, 58% are not participating in any economic activity while 24% are engaged in farming activities by renting out land from the host communities.

Refugees are mainly concerned with a reduction in food distributed by the World Food Programme (WFP) while host communities are particularly worried about the scarcity of food in markets causing the inflation of prices of staples such as cassava flour, which has doubled in price since December 2016.

Both the host communities and refugees are mainly relying on firewood for cooking, creating competition for this shared resource.

Justin Byworth, World Vision Brussels’ Executive Director, commended Uganda as “leading the world” in their refugee response. But he warned that without EU assistance the situation will quickly get out of control.

“They [Uganda] provided refugee families with plots of land so that people can build homes and grow gardens. The EU and its member states must not wait for Uganda to reach a breaking point before stepping up support and increasing long term resources to support refugees and the communities hosting them,” Byworth said.

The World Vision official added: “More can be done to prevent the crisis from slipping into an irrecoverable state. The EU and its member states must continue to address the crisis and ensure protection of children, right to food, and economic developments are sustained for host communities and refugees.”

A fundraising summit hosted by Uganda in June raised only a fraction of the $2 billion that Ugandan officials have said is needed to sufficiently look after the refugees and the communities hosting them.

“This unhappy 1 million milestone must serve as a wake-up call to the international community that much more is needed from them,” Sarah Jackson, an Amnesty International official in the region, said in a statement Thursday. “With no resolution to the conflict in South Sudan in sight, refugees will continue to flee to Uganda and the humanitarian crisis will only escalate.”