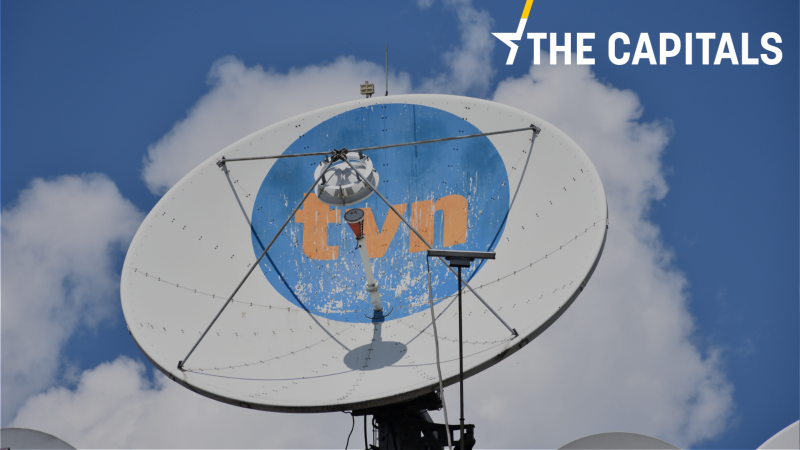 High-ranking American diplomat Matthew G. Boyse is arriving in Warsaw on Monday and the issue will top the agenda of his visit, reported EURACTIV’s partner Gazeta Wyborcza. [Shutterstock/OleksSH]

Before you start reading today’s edition of the Capitals, feel free to have a look at the article “Biden to host Merkel at White House in push to improve ties“.

An amendment to Poland’s media law takes aim at leading independent news channel TVN24 owned by US firm Discovery and is expected to severely harm the relations between Warsaw and Washington.

The matter will be discussed later today with Matthew G. Boyse, deputy assistant to the US Secretary of State, who is visiting Warsaw. Read more.

French President Macron meets auto-sector representatives. French President Emmanuel Macron will receive automobile industry representatives on Monday morning at the Élysée Palace ahead of the European Commission’s tabling later this week of a package of energy and climate laws aimed at reaching the EU’s 2030 goal of cutting emissions by 55%. Read more.

Austria supports European Commission in push to tax kerosene. Austria is backing the European Commission’s kerosene tax proposal as part of its Fit for 55 climate package that will be presented on Wednesday and is urging the EU executive to introduce a “fair taxation” of the transport sector. Read more.

Northern Ireland could have restrictions imposed until autumn. COVID-19 restrictions in Northern Ireland may stretch into the autumn, warned Stormont deputy First Minister Michelle O’Neill, saying that “cases are increasing and will continue to increase” and that officials are carefully watching how that rise translates into hospitalisation and deaths in the region, the Irish Times reported. Read more.

Lithuania to spend €41m on border fence with Belarus. Lithuania will build a fence at its border with Belarus, Interior Minister Agnė Bilotaitė confirmed. Read more.

Greek hospitality sector: Indoor places only for the fully vaccinated. Last week the Greek government announced its intention to create COVID-free or mixed places in the hospitality sector, meaning whether they accept vaccinated and recovered from COVID-19 customers or if they will also accept those who have not yet been vaccinated with a rapid or PRC test. However, the rapid resurgence of COVID-19 cases has changed the plans, MEGA TV channel has reported. Read more.

Spanish PM Sánchez unveils sweeping cabinet reshuffle. Spanish Prime Minister Pedro Sánchez on Saturday unveiled a thorough reshuffle of his cabinet, swapping out heavyweight ministers in the fields of foreign affairs and justice while boosting the representation of women and reducing the average age of the government. Read the full story.

Italy erupts in celebration after EURO soccer triumph. Italians poured into streets and squares in massive numbers on Sunday (11 July) as the national soccer team beat England to win Euro 2020, celebrating a success widely seen as a rebound from the heartbreak failure of not qualifying for the last World Cup. Read more.

75% of Romanians want to join eurozone. Three-quarters of Romanian citizens are in favour of introducing the euro, according to a Eurobarometer survey published on Friday.

More than 60% of Romanians believe the introduction of the euro would have positive effects, despite the country having failed to meet the criteria needed to adopt the single currency. Romania has missed several deadlines it set for itself for adopting the euro and currently does not meet the criteria set in the EU treaty. (Bogdan Neagu | EURACTIV.ro)

Zagreb vows to protect rights of BiH’s Croats. Croatian President Zoran Milanović said in central BiH city Vitez on Sunday that he would consistently insist on the protection of the rights of BiH’s Croats and also on the compliance with the Dayton Agreement as long as it was in force. Read more.

European mediators describe Serbian election talks as ‘constructive’. The members of the European Parliament mediating inter-party talks on election conditions said in Belgrade on Saturday that talks between the ruling parties and opposition in Serbia were constructive and open, and held in a good atmosphere. Read more.

North Macedonia PM: Hopes for a stable government in Bulgaria that will lift the veto. “I expect a functional Parliament and a political Government that will give us the green light – unblock Macedonia on the path to the European Union”, North Macedonia Prime Minister Zore Zaev said. (Željko Trkanjec | EURACTIV.hr)

Montenegro’ PM: Serbia’s behaviour towards Montenegro not acceptable. Deputy Prime Minister of Montenegro Dritan Abazović said that he “is not satisfied” by the way Serbia treated his country and said that it is time to reevaluate the relationship between Podgorica and Belgrade. Read more.