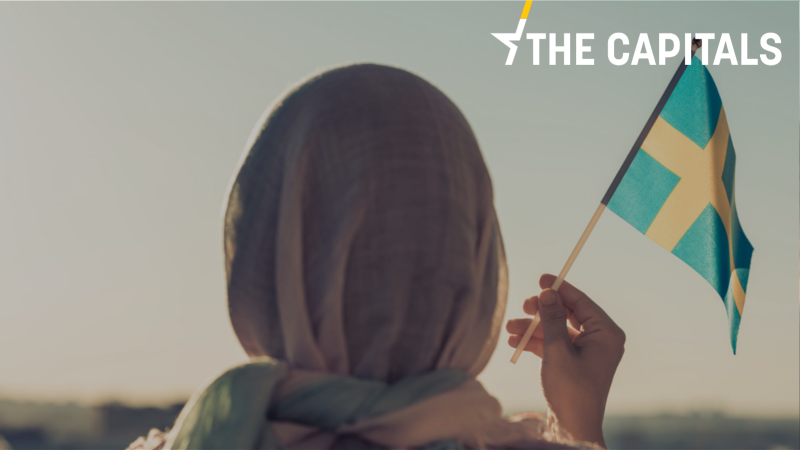 In an interview in August 2019 with Daily Sabah, a Turkish daily, he claimed he was forced out because he “did not speak against Turkey or President Erdoğan.” [Shutterstock/FTiare]

Before you start reading today’s edition of the Capitals, feel free to have a look at the article “Global crackdown on organised crime after high-tech US-Australia sting“.

Also read the story “Summit choreography: Biden to meet Putin ‘with the wind at his back’“.

Sweden’s new Muslim party launches campaign to enter parliament. A pro-Islamic Party Nyanset (Nuance Party) is targeting Sweden’s Turkish and Muslim communities in a bid to reach the election threshold of 4% and enter parliament in the 2022 elections. Read more.

EU justice ministers call for close monitoring of high risk fans at Euro2020. European Union justice ministers meeting under the Portuguese presidency have called for close monitoring of risk supporters during the European football championships, stressing that the format of the competition already poses “a unique security challenge”. Read the full story.

Belgian socialists in favour of headscarf ban. Belgium’s Parti Socialiste (PS) has unexpectedly spoken out in favour of a headscarf ban in a debate that has been raging in the country since last week. Read more.

In other news, Brussels mayors have agreed that from 9 June, it will no longer be mandatory to wear a mask outdoors, with the exception of busy shopping streets, reports Le Soir. (Alexandra Brzozowski, EURACTIV.com)

France wants to become nation of large tech companies. French Economy Minister Bruno le Maire has said his country will strive to promote big tech. “We were a start-up nation, we are going to become a nation of large technology companies“, le Maire told a conference on financing the Fourth Industrial Revolution on Monday (7 June). Read the full story.

DUP members leave party after several office holders are removed. Several members of Northern Ireland’s Democratic Unionist Party (DUP) have resigned amid claims of a “purge” of those who were concerned over the departure of former leader Arlene Foster. So far, Newry, Mourne and Down councillors Kathryn Owen and Glyn Hanna and former Westminster election candidate Diane Forsythe, who is Hanna’s daughter, have left the party.

The move was sparked by a vote to remove Glyn Hanna as chair of the DUP South Down Association at an AGM meeting at the weekend, as reported by the Irish Times.  “I believe this is the beginning of the purge of anyone who spoke against the leadership so I encourage others in the DUP with decency and integrity to consider their position,” Hanna said. Hanna claimed there had been “open and unashamed bullying” by some in the party. (Paula Kenny | EURACTIV.com)

Italian economy minister: Alitalia relaunch negotiations to end soon. Italian Economy Minister Daniele Franco told parliament during a hearing on Monday that the country hopes to “close by the end of the month the negotiations with the European Commission for the relaunch of the Italian national airline Alitalia.”  Read more.

Greece presses ‘safe’ Turkey to readmit migrants. Turkey is a safe country for most asylum seekers now housed on Greek islands, Greece’s migration ministry has said, as Athens seeks to speed up repatriations to its eastern neighbour. Read the full story.

Czechia ready to withdraw lawsuit against Poland under certain conditions. Coal mining at the Turów coal mine can go ahead, but Poland must pay Czechia compensation of €40 million to €50 million and review the permitting processes under which Polish authorities prolonged the license for mining, according to a Czech proposal. Read more.

Slovakia appoints new minister of agriculture. Slovak President Zuzana Čaputová will appoint Samuel Vlčan as agricultural minister on Tuesday after he was appointed by Prime Minister Eduard Heger. The move comes despite incumbent Ján Mičovský announcing his decision to withdraw his resignation and to continue in the role. Read more.

Romanian adopts 5G law that could exclude Huawei. Romania’s parliament approved a law to regulate telecom networks and infrastructure, which could exclude Chinese giant Huawei from having access to its future 5G mobile networks. Read more.

In the final verdict in the trial of Serb wartime commander Ratko Mladić, a life sentence should be confirmed, according to the chief prosecutor of the International Residual Mechanism for Criminal Tribunals (MICT), Serge Brammertz.

The chief prosecutor thus warned against attempts to downplay war crimes and contest the facts established by the court. Mladić, whom media have named the “Butcher of Bosnia” for his role in the worst atrocities on European soil after World War II, was in 2017 found guilty of genocide in Srebrenica, crimes against humanity and breaches of laws and customs of war during the 1992-1995 war in BiH. (Željko Trkanjec | EURACTIV.hr)

In the same period, the export of goods and services increased by 18.3% in nominal terms, while the import of goods and services increased by 11.2%. Moreover, almost 70% of the German investors who have made investments in North Macedonia said they would do it again, a poll implemented by the Delegation of German Industry and Commerce in North Macedonia showed. (Željko Trkanjec | EURACTIV.hr)

A third of Montenegro’s builders work on the black market. Six Albanian citizens who were injured at a construction site near Podgorica on 18 May were hired illegally, the Centre for Investigative Journalism of Montenegro (CIN-CG) from the Directorate for Inspection Affairs (UIP) has confirmed.

A study conducted by the Trade Union of Construction and Construction Materials Industry, together with the International Labour Organisation, showed that 30% of construction workers were hired without employment contracts, Nenad Nenad Marković, the trade union’s president told CIN-CG. This means that of the 8,500 workers registered officially according to Monstat figures, another 3,000 are not registered. (Željko Trkanjec | EURACTIV.hr)