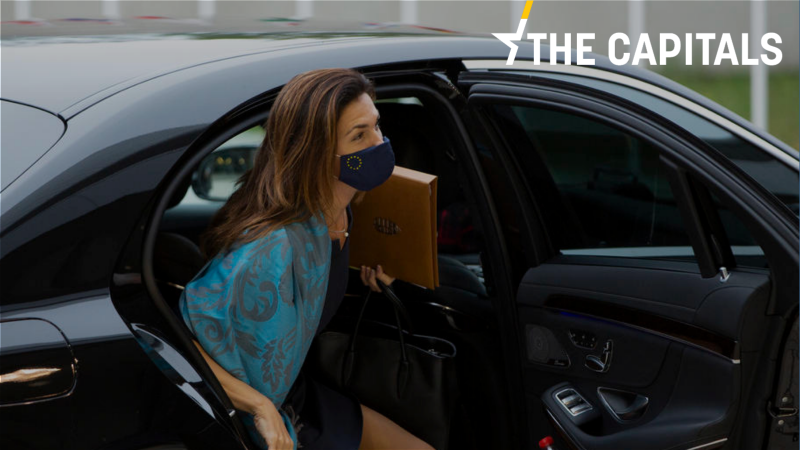 Government sources told Telex that Judit Varga made a unilateral decision on Csehi’s nomination, who was formally heard by the parliamentary committee on European affairs on Monday, but according to the parliamentary website and witness reports his suitability, was not examined on his merits. [EPA/EFE-VIRGINIA MAYO]

Before you start reading today’s edition of the Capitals, feel free to have a look at the article “Slovak party derails plan to buy Russian vaccine without EU registration“.

Hungary’s top EU court nominee chosen unilaterally without formal selection, sources say. Neither a public application nor any other formal selection procedure preceded the nomination of Zoltán Csehi as the country’s new member of the European Court of Justice by Hungarian Justice Minister Judit Varga. According to Telex sources, Csehi had been a lawyer in the law firm of Varga’s predecessor until 2016 and had little experience in European law prior to being appointed to the European General Court that same year. Read more.

Commission wants to ‘explore options’ for India trade, investment. The European Commission said on Thursday it wants to “explore options” for expanding the EU’s trade and investment with India, notably ahead of a summit scheduled for May in Porto as part of Portugal’s presidency of the Council of the EU. Read the full story.

Biontech and Pfizer demanded €54 per vaccine dose in June. Pharmaceutical companies Pfizer and Biontech had requested EU €54.08 per vaccine dose last June, which was then lowered though negotiations to €15.50 per dose. Read more.

Germany’s fight against Nazis on many levels. A year after the racist terrorist attack in Hanau took the lives of nine people of colour, as well as the shooter and his mother, some in Germany are reflecting on efforts to address racism and right-wing extremism in the country. Read more.

French court allows Paris to continue supervising Airbnb rentals. A French court confirmed on Thursday that the regulations put in place by the city of Paris were in conformity with European law and justified to fight the scarcity of Parisian accommodation for long-term rentals, which means that the 120-day-rent-limit per year for the main residence will remain.

“This decision is a historic victory for the city of Paris. It brings five years of legal proceedings to a close. It confirms our decision to regulate these platforms and gives effective legal tools to all French local authorities wishing to regulate the tourist rental market,” said Paris Mayor Anne Hidalgo. (Mathieu Pollet | EURACTIV.fr)

Interior ministry threatens to sue activist. Austria’s interior ministry is threatening to launch a defamation case against lawyer and political consultant Rudolf Fussi, who regularly criticises the government on YouTube, and particularly the police and Interior Minister Karl Nehammer (ÖVP). For instance, after police dogs were used to control a protest in Vienna, he said that these animals may be more intelligent than the officers. The opposition sees this move as an attempt at silencing a critical voice. (Philipp Grüll | EURACTIV.de)

Belgium goes from worst impacted to European average. Belgium ranks 16th out of 30 European countries in terms of the number of corona infections with 240 infections per 100,000 inhabitants over the course of the past two weeks, according to new figures of the European Center for Disease Prevention and Control (ECDC). Almost all neighbouring countries – with the exception of Germany – are currently doing worse. (Alexandra Brzozowski, EURACTIV.com)

Italy seizes assets of eight accused of profiting from government PPE contracts. Italy’s financial police seized on Wednesday assets worth about €70 million from eight people who allegedly used their influence and personal relationships as intermediaries to pocket illegal commissions worth “tens of millions of euros” off of €1.25 billion worth government contracts for personal protective equipment (PPE).

The eight accused – who organised the import of 800 million masks from China during the first months of the pandemic – have been accused of influence peddling, trading in stolen goods, and money laundering. According to the magistrates, their privileged access to the purchase procedure was made possible by the personal relationship between one of the suspects and the extraordinary commissioner for the emergency, Domenico Arcuri.

In other news, the new government, led by Mario Draghi, obtained support from the lower Chamber of Deputies in a confidence vote on Thursday, after the Senate gave its ‘ok’ on Wednesday. In his speech, Draghi said the government’s commitment to protecting Italian industries “from unfair competition will be total”, and announced the will to “improve civil and criminal justice” to guarantee the right to “a trial that is fair and of reasonable duration, in line with the duration of other European countries”.

Spain’s debt reaches highest level in more than a century. Spain increased its debt in 2020 by €112,438 million – almost the equivalent of the annual cost of pensions in the country – due to the heavy impact of the COVID-19 pandemic. Read the full story.

The MEP has also launched a petition for an “Immediate ban of the Grey Wolves at the EU level” aiming to raise awareness around the issue. More.

This means that the procedure for selecting a new Ombudsman needs to start afresh, as the five-year term of current Commissioner for Human Rights, Adam Bodnar, expired in  September 2020. Read more

Germany’s new border restrictions ‘put spanner’ in Czech FM’s Brussels trip. Czech Foreign Minister Tomáš Petříček (Social Democrats), who had planned to travel to Belgium by car to attend consultations with Czech representatives to the EU on 2 March will have trouble crossing the German border as Germany’s entry and transit ban came into force on Saturday and will last until 7 March. More

Possible new COVID-variant found in Croatia. “We may be looking at the new, Croatian variant, of virus,” said Dr Oliver Vugrek, leader of the team of experts at the Ruđer Bošković Institute, who are still waiting for more data. Read more.

EU condemns Slovenia PM’s online attack on journalists. Brussels on Thursday (18 February) condemned Slovenia’s prime minister for online personal attacks against journalists reporting on the deterioration of rule of law in his country, which will take on the rotating EU presidency in July. Full story here

16% of Bulgarians say they had COVID-19. About 800,000 or 16% of adult Bulgarians say they have been infected with COVID-19 although – since they did not disclose the information to their GPs – they are not listed in official statistics, according to data from the Gallup International polling agency. Read more.