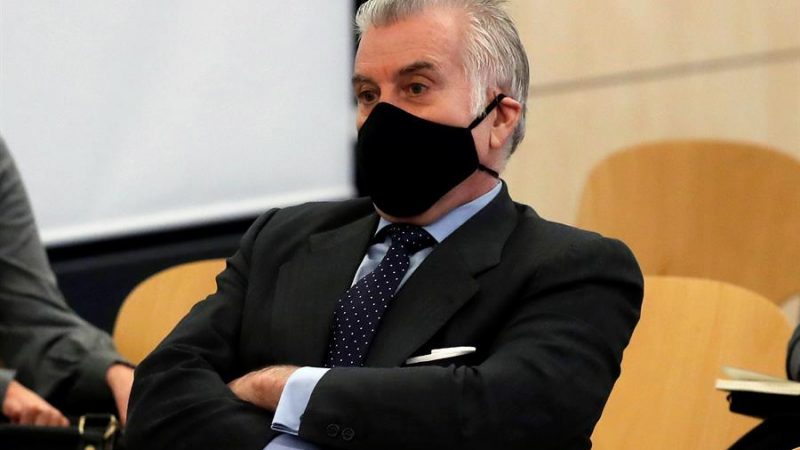 Casado said neither he nor his party can be blamed now or "take responsibility" for what "happened in the PP in '86, in '96, or in 2016". He stressed that he is responsible for what happens in the PP since he took office in the conservative formation, in 2018. [EFE/Juan Carlos Hidalgo POOL]

A new trial against the former treasurer of Spain’s Popular Party (PP) Luis Bárcenas for the alleged use of illegal money to refurbish the headquarters of the conservative party in Madrid kicked off in the Spanish capital on Monday (8 February). EURACTIV’s partner EFE reported.

Luis Bárcenas, who worked as the PP’s treasurer between 2008 and 2009 in the party’s seat on Génova street in Madrid’s city centre, is currently serving a 29-year sentence over a corruption scandal known as “Gürtel”.

The newspaper’s investigation revealed cash donations and outgoing payments from 1990 to 2008 that suggested the existence of “parallel accounting” to illegally channel various payments – including for salaries – within the structure of the conservative party.

The PP have already dissociated themselves from the incidents, party leader Pablo Casado told Spanish private radio station Onda Cero on Monday. Casado said neither he nor his party can be blamed now or “take responsibility” for what “happened in the PP in ’86, in ’96, or in 2016”.

PP’s current leader said he will only be held responsible for what happens in the party since he took office in 2018.

“Never, ever, has my team spoken to criminals, never. Neither with this one (Bárcenas) nor with those at the (Spanish) Justice, which I hope will put an end to this decade of (politically explosive) ‘mines’ very soon (…)”, Casado stressed.