Orbán still in EPP for at least one year 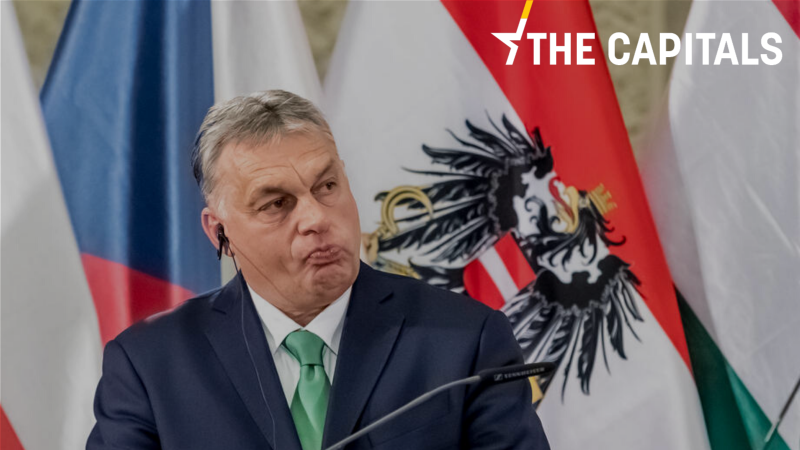 A number of EPP member parties wanted Orbán out, including EPP chief Donald Tusk. However, they faced strong opposition from the Slovenian, French, Spanish center right as well as the Bavarian CSU. [EPA/MARTIN DIVISEK]

Before you start reading today’s edition of the Capitals, we invite you to read about MPs calling for an Anglo-German post-Brexit ‘friendship treaty’.

Unless he decides to quit, Viktor Orbán will remain in the European People’s Party (EPP) for at least one more year as the centre-right group’s assembly yesterday did not find the proper majority to expel the Hungarian Fidesz party.

The membership of Orbán’s Fidesz party in the EPP was temporarily suspended before the EU elections due to alleged violations of the rule of law.

A number of EPP member parties wanted Orbán out, including EPP chief Donald Tusk. However, they faced strong opposition from the Slovenian, French, and Spanish centre-right as well as the Bavarian CSU.

“Punishing the most successful party in the group would not make any sense,” Slovenia’s former Prime Minister Janez Janša said at the EPP Congress in Zagreb last November.

EPP sources told EURACTIV that in his speech, Tusk said that the situation with Fidesz membership had deteriorated since its suspension. What are the next steps? EURACTIV’s Network Editor Sarantis Michalopoulos has more.

Merkel and Kurz disagree on EU issues. Although harmonious in tone, the two heads of state disagreed on two crucial EU issues. Not only does Austria reject the German proposal of a tax on financial transactions for failing to hit big-time speculators but instead harms small investors, but the two also disagreed on the recently circulated idea of EU High Representative Josep Borrell regarding the revival of Operation Sophia to monitor the weapons embargo against Libya.

But how come the two heads of state are unable to agree on these issues? EURACTIV Germany’s Philipp Grüll reviews what they both had to say.

In other news, the far-right Alternative for Germany (AfD) in Thuringia announced yesterday (3 February) their candidate for the state’s Minister-President elections, which will take place on Wednesday (5 February). Challenging incumbent Bodo Ramelow of the Left (Die Linke) will be Christoph Kindervater, the honorary mayor of a 350-person town who claims no party affiliation.

But what are the chances of him defeating Ramelow? Sarah Lawton has more.

Macron made peace with Warsaw. French President Emmanuel Macron has welcomed a “turning point” in relations with Poland, during the first day of his two-day visit to Poland on Monday (3 February).

During the first day of his two-day visit to Poland, French President Emmanuel Macron met with his counterpart, Andrzej Duda, and discussed partnership within the EU and upcoming challenges. In their presence, ministers of both countries signed a programme for strategic cooperation, and a declaration regarding the consolidation of Polish-French cybersecurity cooperation.

The UK’s hosting of the COP 26 climate change summit is in chaos, after the chair, former minister Claire O’Neill, was sacked. O’Neill is now considering suing the government for sacking her, according to the BBC. Officially O’Neill was told by Downing Street that she couldn’t chair the Glasgow meeting because she was no longer a minister, but she has faced criticism over the organisation of the summit, which is believed to be running well over budget. (Benjamin Fox, EURACTIV.com)

Defender2020 kick-off. The port of Antwerp kicked off preparations for the largest exercise in Europe by US forces in 25 years, which aims to test the delivery and mobility of military reinforcements to Europe in the context of NATO.

Spain’s main separatist political forces (JxCat, CUP, ERC, EH Bildu and BNG) expressed their rejection of the Spanish monarchy on Monday (3 February) in a joint manifesto. They criticised the monarchy for being an “anachronistic institution inherited” after the death of dictator Francisco Franco in November 1975 and urged King Felipe VI to stop being the “guardian” of the parliament and Spanish democracy,  EURACTIV’s partner EFE reports.

Read more on the issue: “Separatist MEPs bring Catalan conflict to the heart of EU democracy“.

In an exclusive interview published on Monday by “El Pais”, Ribera stressed that the “associated costs of inaction” are too high to be neglected, “in particular for southern EU countries”, like Spain or Portugal.

EURACTIV’s partner EFE has a few more of her quotes.

Bossi’s slap on the wrist. In an interview with La Repubblica daily, the founding father of right-wing party Lega Umberto Bossi was critical of the nationalist narrative regarding the current leader Matteo Salvini. “People wonder whether Lega still protects the interests of Northern Italy,” he said, blaming Salvini for having abandoned the fight for more regional autonomy. Salvini replied that, although respecting Bossi’s ideas, the party’s support has never been so high in the whole country. (Gerardo Fortuna | EURACTIV.com)

Motorway vignettes as a ‘sophisticated tracking system’? The failed tender to operate new electronic vignettes across the country’s motorway, for which the country’s now-former Transport Minister Vladimír Kremlík was fired, was also supposed to serve as a sophisticated car tracking system, according to Server Seznam Zprávy. The vignettes system would not only have recorded car licence plates but also the faces of passengers. “It is nonsense,” said PM Andrej Babiš in a response to the server’s findings.

In other news, the Czech state budget saw its first deficit since 2003, the country’s finance ministry announced. The €350 million drop, according to the ministry, was due to higher spending on pensions, family benefits, teacher salaries, as well as EU budget contributions because the European Commission had “asked for two monthly payments to the EU’s budget already in January”.  (Aneta Zachová | EURACTIV.cz)

EURACTIV Slovakia looks at the climate policy plans of parties ahead of elections. Slovak coalition and opposition parties have agreed on the need to develop renewables and the need to finish the ongoing construction of the Mochovce nuclear power plant. However, the parties remain divided on the future of nuclear energy and eco-heating boiler grants and lack concrete ideas on how to combat energy poverty. (Zuzana Gabrižová | EURACTIV.sk)

No Agreement on Kosovo without Russia and the UN. Russian Ambassador to Serbia Aleksander Botsan-Kharchenko said that his country would join the Kosovo talks if Belgrade asks it to do so, but that there will be no deal “without Russia and the Security Council’s approval”. Russia has always been for the continuation of talks, said the ambassador in an interview with Blic daily on 3 February, adding that the desire for a quick solution is a cause for concern, as visible progress and compromise require more time. (EURACTIV.rs)

Unifying HDZ members. The election debate for party president, deputy and four vice-presidents for Croatian Democratic Party (HDZ) which will be held on 15 March is heating up. These functions are elected directly, by one member, one vote. Plenkovic’s opposition candidate for party president, Miro Kovac, said what kind of party he wants after the March elections during today’s festivity of Saint Blaise, the patron of Dubrovnik – a ceremony which gathered current leaders of HDZ, noting that the question should be posed to the voters.

Slovenia makes a slow turn. Slovenian Foreign Minister Miro Cerar said that talks on the border issue with Croatia are possible but that they could only be about ways to implement the border arbitration award which Ljubljana considers binding, and that dialogue could be started by Presidents Borut Pahor and Zoran Milanović. Milanović is elected president and is supposed to take full duties around February 16. (Željko Trkanjec | EURACTIV.hr)

In other news, SAB (RE), one of the parties of the previous coalition, launched the initiative to reform voting legislation. But, the biggest opposition party SDS (EPP) was not called to be part of the initiative. SAB could not enter parliament and its vice-president left the party yesterday. Janša struck back calling all parliamentary parties to meet on Friday and see who is open for a new coalition.

President Borut Pahor believes it is very important that talks be held between the parties and the parliamentary groups following the resignation of the PM. He noted that the coalition must be founded on a serious common agenda and a desire to bring about change, not on a desire for power. Today, Pahor will start formal consultations with the parties. (Željko Trkanjec | EURACTIV.hr)

A new government. Albin Kurti started presenting his new cabinet to the Kosovo parliament at noon on Monday. Srpska Lista has struck an awkward compromise by stating that it will not support the government but will participate in it with two ministers guaranteed by Constitution. Kurti caused a stir in Serbia saying that he would file a lawsuit against Serbia for genocide, introduce full political, economic and trade reciprocity and set up war crimes and genocide institute.  (Željko Trkanjec | EURACTIV.hr)

Turning geography into politics. During his visit to Tirana, European Parliament President David Sassoli strongly urged the opening of EU accession negotiations for both Albania and Northern Macedonia, as their membership would mean turning a geographical space into a political space”.

But what else did the president of the European Parliament have to say? Augustin Palokaj from EURACTIV’s partner Jutarnji list looks into it.