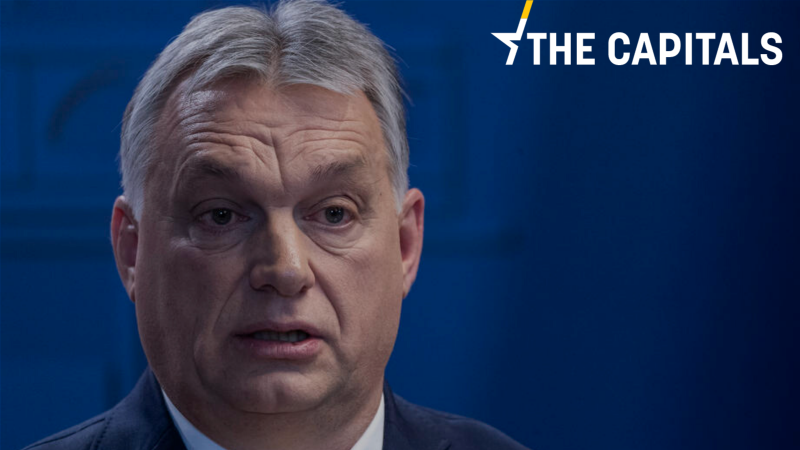 He would also not pay a court-mandated fine to a Roma community in eastern Hungary in a case of alleged school segregation. [EPA/HUNGARY OUT]

Before you start reading today’s edition of the Capitals, we invite you to read an interview with the head of the OECD who said: ‘Sánchez government is a response to Spain’s political reality’. See all the latest developments from Davos here.

EU INSTITUTIONS. EURACTIV has learnt that the EPP, S&D and Renew Europe have agreed to establish three special committees each with a one-year mandate to better coordinate and analyse European Commission proposals on digital, cancer and fake news. Sarantis Michalopoulos has the detail.

Orbán vows to disobey court orders. Prime Minister Viktor Orbán said his government would disobey court orders to compensate former prisoners for having endured inhumane treatment and would also not pay a court-mandated fine to a Roma community in eastern Hungary in a case of alleged school segregation. Yet, some of the country’s most senior lawyers have been very critical of the Hungarian PM’s approach to the law.

In other news, Orbán wants to cooperate with moderate Islamic parties. EURACTIV Croatia’s Željko Trkanjec looks into both stories.

Green MP opposes coalition proposal on preventive detention. The controversial proposal from Austria’s new Green-ÖVP-coalition to impose preventive detention for those suspected of planning acts of terrorism would necessitate a constitutional amendment according to constitutional lawyers, and was rejected by Green MP Michel Reimon in a radio interview on Thursday (23 January). Although it has been included in the coalition agreement, Reimon is convinced that this proposal would be ultimately voted against by Greens and that Chancellor Sebastian Kurz (ÖVP) would not break up the coalition “over such a small thing”.  (Philipp Grüll | EURACTIV.de)

Read more on this issue.

State of corruption. Belgium must strengthen rules on integrity of government members and outside activities by police officers, the Council of Europe’s anti-corruption body GRECO has urged in its new evaluation report.

“There is not a policy on integrity or an ethical framework worth the name applicable to ministers,” the body complained. Alexandra Brzozowski has more details.

Swedish economy starting to take hits. In comparison to most other EU countries, Sweden’s economy growth has been satisfactory, while unemployment and national debt have been low. However, this year, it appears that the cracks are starting to show, as the waves of the global economy have now reached the shores of Sweden.

But can its economy withstand the slowdown? EURACTIV’s Pekka Vänttinen reports.

‘Denial of justice’. The UK government has accused the US of “a denial of justice”, in a growing diplomatic row, after Washington refused an extradition request for Anne Sacoolas, the wife of a US intelligence officer, who fled for the US under diplomatic immunity following a crash which killed teenage motorcyclist Harry Dunn near an airbase in August. Sacoolas is set to be charged with causing Dunn’s death but US Secretary of State Mike Pompeo personally turned down the extradition request, which he described as “highly inappropriate”. (Benjamin Fox, EURACTIV.com)

No grand coalition. Fianna Fáil leader Micheál Martin has dismissed suggestions that his party could join forces with Fine Gael in the next Irish government. It had appeared that a grand coalition between Ireland’s two largest parties could be on the cards, following  Fine Gael leader Leo Varadkar’s recent admission that he would be prepared to support a Fianna Fáil minority government, or form a partnership.

Martin, meanwhile, said yesterday (23 January) that he would only be prepared to form agreements with the Labour or Green parties. (Samuel Stolton | EURACTIV.com)

New EIB loans for Greece. Greece signed on Thursday (23 January) two loan agreements with the European Investment Bank (EIB) worth €330 million to finance the construction of a new airport in Heraklion under PPP (€180m) and for the liquidity in the national scheme of EU-co-financed projects (€150m) in sectors such as climate change, energy efficiency, SME competitiveness, research and innovation, health, education, culture and urban regeneration initiatives.

In other news, Greece’s public gas company is now for sale. Greece launched a much anticipated international public tender yesterday for the sale of 65% (or up to 100%) of the state-owned Public Gas Corporation’s complete wholesale and retail gas activities, under a new company: DEPA Commercial. The PGC is split in three and another spin-off company, DEPA Infrastructure, is also under tender, while the state will keep ownership of all international projects of the current state company, such as rights in international pipelines etc. (Theodore Karaoulanis | EURACTIV.gr)

Blindspot on EU food label. Five Star Movement MEP Laura Ferrara has urged the Commission to improve access to food information for blind and visually impaired people in the context of the new food labelling rules. “We want to defend all consumers by proposing the use of Braille language and modern technologies capable of implementing an audio-narrating label for food products,” she said. EURACTIV’s Gerardo Fortuna has the story.

Morawiecki on Russia and the opposition. Amid a “war on history” between Poland and Russia, Polish Prime Minister Mateusz Morawiecki attacked not only Russia but also opposition parties, such as the far-right Konfedracja, for their alleged adherence to Russia. EURACTIV’s Łukasz Gadzała reports.

Sólymos resigns. Environment minister and deputy-PM László Sólymos announced his resignation after being arrested following a violent incident at a restaurant. But with elections due to kick off in less than two months, this is likely to hinder approval of the government’s low-carbon strategy for 2050, as well as the implementation of the deposit return scheme for PET bottles and cans. (Zuzana Gabrižová | EURACTIV.sk)

The most corrupt country in the EU. Bulgaria is, once again, the most corrupt country in the EU with 43 points – 100 points being “very clean” and 0 points being “very corrupt” – according to 2019’s Transparency International’s Corruption Perceptions Index. Globally, Bulgaria ranks 74th, together with Jamaica and Tunisia. Although the country had moved up one point towards becoming “clean” compared to the previous year and had created numerous anti-corruption bodies over the years, its index has hardly moved in the past seven years. Media freedom, the election process, party funding, public appointments and the rule of law are among the reasons for Bulgaria’s low ranking. [dnevnik.bg; Krassen Nikolov | EURACTIV.bg]

Falling down in the rankings. According to the EIU Democracy Index, Serbia has fallen five spots and is now ranked 66th on a list of 167 countries. At the same time, according to Transparency International’s Corruption Perception Index, Serbia has dropped four spots down, as it now ranks 91st among 180 countries and territories. (EURACTIV.rs)

Fight over Iraq. In a letter to the defence ministry, Foreign Minister Miro Cerar has requested to return troops to the mission in Erbil, Iraq as soon as possible because if not, Slovenia’s international reputation will suffer. But is there more to it than meets the eye? EURACTIV Croatia’s Željko Trkanjec has the story.

In other news, the Balkan ‘banana king’ takes over the business of failed Slovenian airline. The Slovenian company Air Adriatic, owned by businessman Izet Rastoder, has just purchased the licenses for conducting air operations of the former Slovenian airline Adria Airways for €45,000 at an auction in Ljubljana. (Željko Trkanjec | EURACTIV.hr)

Osijek designated first Croatian 5G city. The Croatian government on Thursday (23 January) decided that the city of Osijek would be the country’s first 5G city. EURACTIV Croatia’s Željko Trkanjec looks into it.

In other news, the government proposes to amend central bank and credit institution laws. The government forwarded its amendments to the laws on the Croatian National Bank (HNB) and credit institutions to parliament on Thursday. The proposed amendments are important in the context of adopting the euro, the letters of intent to join European Exchange Rate Mechanism II and the banking union, and will facilitate close cooperation between the ECB and the HNB.  (Željko Trkanjec | EURACTIV.hr)

Call to ease tensions. Although Montenegrin and Serbian presidents Milo Đukanović and Aleksandar Vučić continue to have differing views on Montenegro’s freedom of religion law, they agreed, during an informal meeting at the Holocaust forum in Jerusalem, to resume talks and calm tensions that erupted among Montenegro’s Serb community after the law was adopted. EURACTIV’s Željko Trkanjec reports.