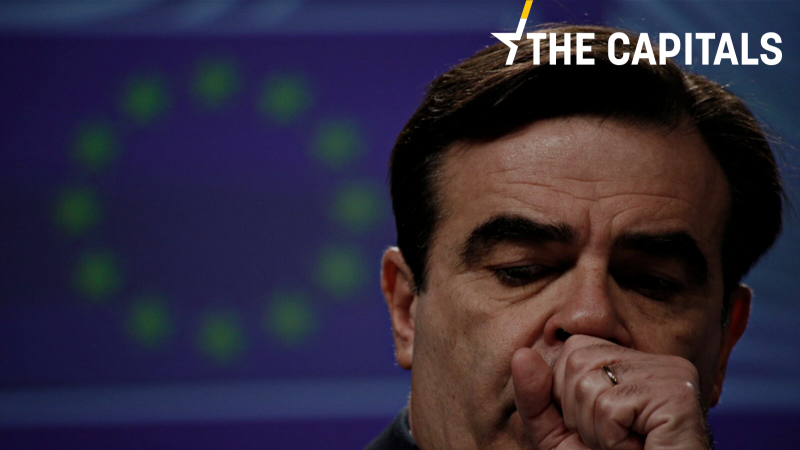 The Commission’s new name for the migration portfolio “Protecting our European Way of Life”, which President-elect Ursula von der Leyen has assigned to Greece’s former EU chief spokesperson Margaritis Schinas, has prompted a critical reaction in Paris and Brussels.

There is already speculation that von der Leyen is considering re-naming the portfolio.

Following the weekly meeting at the Elysée, French government spokesperson Sibeth Ndiaye acknowledged that the name was “very questionable”.

Even if France doesn’t have a say on the names of Commissioners’ portfolios, Ndiaye reminded that all Commissioners will have hearings in the European Parliament and there, Schinas will “have to explain”.

“Indeed, there is some need for a better explanation, this is what the EU Parliament hearing is for,” confirmed Amélie de Montchalin, Secretary of State for European affairs.

The new title of the migration portfolio has prompted fierce criticism from leftist and green lawmakers in the European Parliament.

Karima Delli, French green MEP and chair of the transport committee, raised the issue at a meeting of EP committee chairs, where 13 chairs agreed to send a common letter to inform EP president David Sassoli of their disagreement with the portfolio title. 3 committee chairs voted against the idea, EURACTIV France has learned. Aline Robert, editor-in-chief of EURACTIV France wrote in her blog: “Was it necessary for Ursula von der Leyen to give so many guarantees to the far right by inviting xenophobia in the titles of some Commissioners?”

There is already speculation that von der Leyen is considering re-naming the portfolio.

The “protection of the European way of life” also drew criticism in London. Green MEP Molly Scott Cato told The Independent: “This looks like the portfolio to fight back against the rise of the fascists, but only by adopting their divisive rhetoric around ‘strong borders’.

“I hope Ursula von der Leyen does not mean the same,” Kouloglou said.

The leftist MEP also said Europe is not a “field without a fence” as Schinas recently said.

“There are countries that suffer the consequences of the refugee crisis because some others do not take their own share of responsibility. How will Mr Schinas force Hungary to accept refugees? It’s hard. He and the Hungarian Prime Minister belong to the same party, but there is no reason for party discipline there.”

EURACTIV.com was informed that Schinas was not aware of his precise porfolio the night before when his vice-presidency was locked. (Cécile Barbière, EURACTIV.fr – Sarantis Michalopoulos, EURACTIV.com)

As the 23 September deadline for new elections looms – with no agreement in sight with leftist Unidas Podemos to avoid new elections – in a debate in the parliament, Sánchez urged the EU to reach an agreement on the block’s budget “as soon as possible”.

Sánchez said Spain wants a financial framework  that is “true, ambitious and agile” to better manage resources, in particular, those aimed at boosting entrepreneurship and youth employment. (Fernando Heller /EuroEFE.EURACTIV.es)

Parliament suspended. Inspired by their British colleagues, Poland’s right-wing ruling Law and Justice (PiS) party has unexpectedly asked for the Polish Sejm to be suspended until after the parliamentary elections on 13 October, sparking claims by the opposition that it is planning to delay unpopular bills until after the vote. (Alexandra Brzozowski, EURACTIV.com)

Poland wins energy case over Commission. The European Commission is unlikely to appeal a decision of the EU General Court on Tuesday (10 September) to restrict the transit of Russian gas via the Opal pipeline, running on German territory. The Opal pipeline, which already carries gas from Nord Stream, runs parallel to the German-Polish border all the way to the Czech Republic, over 480 km. But following the court decision, Opal will be constrained to take only 12.5 bcm/y. The court decision has an immediate effect.

Germany is the main beneficiary of Nord Stream and Nord Stream 2. The legal challenge was brought by Poland, the most vocal opponent of the project. (Łukasz Gadzała, EURACTIV.pl)

Friends of Frans. Ursula von der Leyen’s right-hand man and climate action paladin Frans Timmermans has started to assemble his Commission team. It was revealed that Diederik Samsom will head up the Dutchman’s staff from 1 November. Samsom is a former leader of Timmermans’ Labour Party (PvdA), journalist and Greenpeace activist. The 48-year-old will coordinate efforts to ramp up the EU’s emissions targets, implement a carbon border tax and help coal-dependent countries go green. Timmermans reportedly said that his compatriot “is the best man for the job”. (Sam Morgan, EURACTIV.com)

In Berlin, Chancellor Angela Merkel has told the Bundestag to focus on the fight against climate change. She spoke about a “challenge to humanity” and admitted that climate protection would burden the federal budget – but that doing nothing would be even more expensive. (Claire Stam, EURACTIV.de)

The UK government has been allegedly attempting to harvest user data, surreptitiously obtaining information from individuals accessing the official Gov.uk website, ahead of the UK’s scheduled withdrawal from the EU at the end of October.

The news drew strong reactions from opposition parties, including Labour’s Deputy Leader Tom Watson. He said on Wednesday: “This centralised harvesting of citizen’s data is very suspicious. Why would Dominic Cummings say this was a top priority for the government, given the national crisis we are in? We need immediate assurances about what this data is going to be used for.”

Meanwhile, a UK government spokesperson denied that any wrongdoing had taken place. “No personal data is collected at any point during the process, and all activity is fully compliant with our legal and ethical obligations,” they said. (Read the full story HERE) (Samuel Stolton, EURACTIV.com)

Pro-investment reforms. Greater flexibility for fast-track major investments, simplifying licensing for business, especially industrial ones and new telecommunication infrastructure are some of the major reforms introduced by a bill presented by Greek government for public debate yesterday night.

The bill creates also a Single Digital Map for the unified mapping of all public geo-spatial data, used by citizens and businesses for licensing, accessible online and free of charge. (Theodore Karaoulanis, EURACTIV.gr)

‘Life partnerships’ may be gaining ground. The majority of Slovaks (57%) agree that there should be some form of “life partnerships” arrangement anchored in the law regardless of whether a couple is heterosexual or gay. The opinion poll was commissioned by the NGO Inakosť (Otherness). Slovakia is one of the six remaining EU member states without such provisions in place. Opinion polls on this issue tend to produce various results depending on the nuances in the question posed. This poll asked about “life partnerships”, not “registered partnership”, as the latter tend to be perceived as an arrangement specifically for gay couples.  (Zuzana Gabrižová, EURACTIV.sk)

President says Kosovo is led by criminals. Czech President Milos Zeman wants to discuss with other high-ranking Czech officials whether it would be possible for the Czech Republic to revoke recognition of Kosovo as an independent state. Zeman supports this idea, which he shared with Serbian President Aleksandar Vucic, who praised his attitude. According to Zeman, Kosovo is led by war criminals and therefore should not belong to a community of democratic states.

Czech agency ČTK reported that after Zeman’s statement that he loves Serbs but not Kosovo, the Priština administration decided not to participate in the V4 and Western Balkans Prime Minister Summit on 12 September in Prague. (Ondřej Plevák, EURACTIV.cz / beta.rs, EURACTIV.rs)

Spying for Russia: A total of eight people have been detained and questioned throughout the course of the investigation into the allegations against Russophile Movement head Nikolai Malinov of spying for Russia. Bulgarian prosecutors charged the head of the non-governmental organisation on Tuesday with spying for Russia as part of a scheme they said aimed to draw Bulgaria away from its Western allies and towards Moscow. The prosecutors also said on Tuesday they had banned a veteran Russian foreign intelligence official, Leonid Reshetnikov, from entering Bulgaria for 10 years. Reshetnikov is deputy chair of the Double-Headed Eagle and the former head of the Russian Institute for Strategic Studies. (Dnevnik.bg)

Coalition reborn. The socialist party PSD lost the support of its junior partner ALDE last month and PM Dancila is trying to build a new majority before the government faces a confidence vote in the Parliament. She has proposed three former members of ALDE to become members of the government. After helping to elect a former ALDE minister as president of the Senate on Wednesday, Dancila announced that the vacancies left by ALDE ministers’ recent resignations will be filled by members of the ALDE party. These defectors were quickly expelled by ALDE, so that a Parliament vote could still be needed. (EURACTIV.ro)

Medvedev asked Slovenia to help with Agrokor. “It would be good for the Slovenian government to get involved in solving the problems of Agrokor and Mercator”, Russian Prime Minister Dmitry Medvedev said before the official talks with Slovenian Prime Minister Marjan Šarec in Moscow.

Agrokor is the biggest Croatian food producing and processing industry that collapsed but was saved with lex specialis. Now it is called Fortenova Group and the biggest shareholders are Russian banks, VTB and Sberbank. Fortenova asked the EU Commission to allow incorporation of Mercator, the biggest retail chain in Slovenia (Agrokor bought it in 2014), but Ljubljana would like to get back ownership of the company.

Fabris Peruško, CEO of Fortenova Group, in an interview for novac.hr said that company is still facing over-indebtedness. He did not comment on Medvedev but said that Mercator will soon became part of Fortenova.  (Željko Trkanjec, EURACTIV.hr)

Croatia and Israel cooperation on security. Croatia’s Deputy Prime Minister Davor Božinović has signed a cooperation agreement on public security in Tel Aviv with Israel’s Minister of Public Security, Strategic Affairs and Information Gilad Erdan. Božinović explained that the agreement extends cooperation between intelligence agencies primarily between interior ministries in the area of cybersecurity and the exchange of officers and experts.

Božinović also signed a cooperation agreement with the International Institute for Counter-Terrorism (ICT) executive director Boaz Ganor which will enable Croatian police officers to participate in innovative training programmes in the field of homeland security and in combating terrorism.

On 17 September, the Croatian Ministry of Defence and EURACTIV’s partner Jutarnji list, are organising a conference on “Homeland security and crisis management” which Božinović will attend together with some experts from Israel, EU, and the USA. (Željko Trkanjec, EURACTIV.hr)