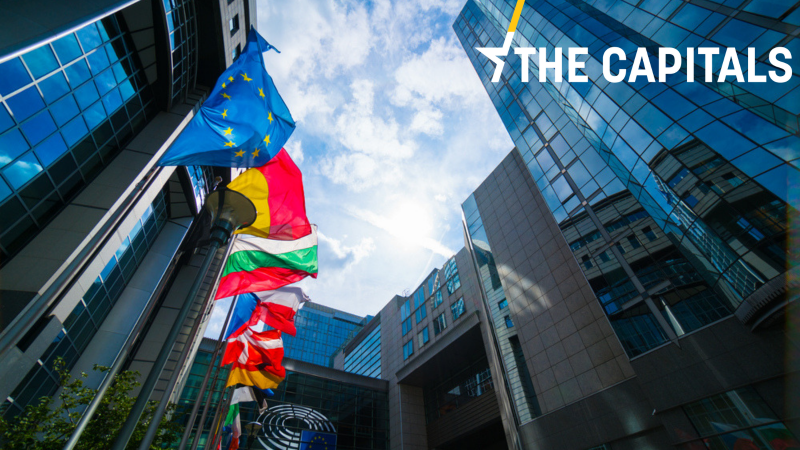 Before you read The Capitals today take a look at EURACTIV’s latest articles on the EU top jobs summit.

But since she was not a candidate in the EU elections, she may face trouble in getting the approval of the European Parliament, which has already expressed its disappointment.

The centre-right European People’s Party has not proposed any candidate and the group’s leader Manfred Weber said it was time for a socialist candidate to lead the EU assembly.

In order to please Eastern Europe, EU leaders suggested that Bulgaria’s Sergei Stanishev, president of the Party of European Socialists would be the president of the new EU Parliament for 2.5 years and then be replaced by Weber.

EURACTIV’s partner Dnevnik.bg quoted Bulgarian Prime Minister Boyko Borissov as saying at such a high position for a Bulgarian would be an honour even though “his people don’t like him”.

Borissov made it clear that the MEPs of his own party GERB (EPP) today would vote for Stanishev.

But a source from S&D, the socialist group in the EU Parliament, told EURACTIV.com that Stanishev’s candidacy was just a rumour circulated by PES circles. “We had a long meeting in the S&D group about our candidate but the name of Stanishev has not even been mentioned,” the source said.

The same source said the socialist candidate Sassoli is expected to be elected from the first round with the EPP’s support.

Asked about the geographical representation criterion, the source replied: “The European Parliament has the right and duty to decide on its future president. The EU Council cannot impose any candidate as long as they did not ask the Parliament about their EU top jobs choices.”

Asked about the S&D stance on Ursula von der Leyen, the source said: “For now there has been fierce opposition from a large majority in the group”.

A point for Germany, but a defeat for Europe

The head of the German social democrat MEPs (SPD), Jens Geier, said his group would not support the nomination of Defence Minister Ursula von der Leyen. “The European fraction of the SPD will definitely not agree to this proposal,” Geier said in Strasbourg. He also said the outcome of the special summit in Brussels was “evidence of incapacity” for the EU Council and called for an alternative solution.

Speaking to journalists after the EU top jobs summit, French President Emmanuel Macron appealed to the SPD’s “responsibility” to agree to the EU Council’s personnel package. European parties should now work in order to get their MEPs to agree to the package, he said. “And I will help Chancellor Angela Merkel to try to convince her coalition partner that this proposal is a good one”, he also said.

Nevertheless, the CSU supports the nomination of von der Leyens. “Of course, it is good for Germany that we can again appoint the President of the Commission for the first time in decades,” he said and added: “We accept the decisions out of responsibility for the country and Europe. This is a point for Germany, but a defeat for Europe”.

Similar situation in Paris. French MEPs were unhappy with the EU Council package. “The package acknowledges the failure of the Spitzenkandidatenstrategy. And the responsibility for this failure lies with Emmanuel Macron,” an EPP MEP said.

“Now we will have to find a position for Manfred Weber that is worthy of his campaign,” the same source said in Strasbourg. Earlier in the day, Jean Leonetti, president of Les Republicains had tweeted that Macron should support Michel Barnier rather than any one else.

On the socialist side, critics turned to threats regarding the vote for the new European Commission president. When Tusk said a deal was “closer and closer”, French socialists delegation asked, “from the wall?”

Nathalie Loiseau, from Macron’s party, supported the German defence minister, saying she was an excellent candidate.(EURACTIV.fr)

In the Netherlands, EU socialist candidate Frans Timmermans was close to succeeding Jean-Claude Juncker but the Visegrad nations blocked his candidacy. Czech Prime Minister Andrej Babiš and Hungary’s Orbán both claimed that they had ousted him from the race.

S&D Group leader Iratxe Garcia said that “It is unacceptable that populist governments represented in the Council rule out the best candidate only because he has stood up for the rule of law and for our shared European values.”

Spanish Prime Minister Pedro Sánchez, who was expected by his political family to champion Timmermans’ cause, defended the “very balanced” agreed list of names. The Spaniard told reporters that the reduction in the number of socialist governments and disruptive liberal forces had made the power-sharing talks very complicated.

Next steps. Timmermans can at least count on continuing in his role as one of the vice-presidents of the Commission. Council chief Donald Tusk said that leaders will encourage von der Leyen to offer the Dutchman and fellow Spitzenkandidat Margrethe Vestager deputy roles.

Macron said that he was counting on the two to be given the “highest possible responsibilities” in the next EU executive. Von der Leyen is yet to get the blessing of the Parliament and there are currently doubts about whether she will command enough support to get the job. If her candidacy were to be nixed by the EU assembly then the Council would have one month to propose another candidate, according to the EU treaties. (Sam Morgan, EURACTIV.com)

Vestager’ successor. Italy is satisfied with the EU Council package. Italian Prime Minister Giuseppe Conte said he was convinced after a “long, interesting, stimulating and persuasive” phone call he had with the designated president of the Commission this morning.

In exchange for his support for the package, Conte has obtained a vice presidency of the Commission and the competition portfolio. Right-wing party Lega will appoint the Italian Commissioner. “They got a lot of valuable political figures. I don’t see any difficulty to find the best person for the job,” said Conte.

Unexpected survivor. Outgoing Belgian PM Chárles Michel, who was decided to take over the EU Council helm from Donald Tusk, might prove to be an unexpected, but suitable pick.

However, it’s not good news for the stalemate of the federal government formation back in Belgium and his own party, which now has to replace him. Since 2014, Michel has been building a solid European network, developing personal relationships with many of his EU counterparts during official visits, via private dinners, or drinks after EU summits.

For Polish Prime Minister Mateusz Morawiecki, Poland “achieved its goals”. Warsaw fiercely opposed Timmermans’ candidacy, because as a vice-president of the EU Commission, he criticised Poland for the rule of law violations and sweeping judiciary reforms.

Morawiecki said, “We were one inch from selecting a candidate of far-left who doesn’t understand the reforms in the post-communist countries”. According to him, Warsaw led the effort to build a blocking coalition.

As for Ursula von der Leyen, Morawiecki said there were many issues he wants to cooperate with her on. “NATO, Russia, boosting competitiveness,” he said.

Donald Tusk suggested that Central Europe should get a position of vice-president in the EU Commission, although it is unlikely that he meant Poland specifically. But he also sent a message to Poland:

“Those who thought that by not selecting Timmermans means that the EU will become less interested in upholding the rule of law, are mistaken,” Tusk said. (Łukasz Gadzała, EURACTIV.pl)

“Good signal for women”. Slovak Prime Minister Peter Pellegrini called Ursula von der Leyen’s nomination a “good signal for society and all of the women, but also for little girls in school, it will give them enthusiasm and conviction that it is worth to work and that even a woman can be at the helm of such an important institution.”

Since the agreement has been unanimous in the European Council, Pellegrini hopes, the EU Parliament will support the package. The PM said that he regrets that Maroš Šefčovič’s name was not among the nominations, but that he is the V4 candidate for the EC Vice-presidency in the new Commission.  (Zuzana Gabrižová, EURACTIV.sk)

Death kiss. “If I were a eurosceptic, I would open a bottle of champagne. EU leaders gave the EU a death kiss,” Czech MEP Tomáš Zdechovský (EPP) told EURACTIV.cz. “It is the end of spitzenkandidats. “The European political groups will not push forward any candidature in the future,” he said, adding that yesterday’s decision will have a very negative impact on the EU future.

But Czech PM Andrej Babiš is satisfied with the European Council’s choice and hopes that all 21 Czech MEPs will support Ursula von der Leyen. “She knows our region. For us, she is, of course, a better choice than Timmermans,” the Czech PM said. (Aneta Zachová, EURACTIV.cz)

President under fire. Calin Popescu Tariceanu, leader of ALDE, a junior partner of PSD in Romania’s ruling coalition, criticised President Klaus Iohannis for too quickly agreeing with decisions made by others.

Tariceanu attacked the EU leaders, saying they sent a bad message to Europe’s citizens. “We saw how principles are traded: we support you to be European Commission president if you get us in Schengen, the CVM is lifted,” Tariceanu said, referring to a Facebook live video of Bulgarian PM Boyko Borissov speaking with Frans Timmermans.

“In my opinion, it’s wrong if these things are discussed in the flea market. But, at least, one has to appreciate that the Bulgarian PM is fighting to get as much as possible for his country. Our president is much tougher and more unyielding: nothing about Schengen, nothing about CVM or Moldova, but he managed, after aggressive negotiations, to get for himself the right to immediately agree with any decision made by the big fish in Brussels,” Tariceanu said.

Iohannis described the EU leaders’ agreement as “an acceptable compromise” for all member states, which “ensures stability and efficiency of EU institutions for the next institutional cycle.”(EURACTIV.ro)

Good solution. Croatian Prime Minister Andrej Pleković (HDZ-EPP) expressed his satisfaction with the compromise. “The candidates are a very good solution for Croatia”, he said.

“The fundamental goal of Socialist and Liberal Group was that somebody from their leadership becomes the leader of the Commission. For the EPP, this could not be accepted. What has been achieved today respects the will of the majority of voters”, he added.

But Dubravka Šuica, an MEP from HDZ (EPP), said the concept of Spitzenkandidats was rejected and that was a “betrayal of our voters”. (Željko Trkanjec, EURACTIV.hr)

And in other news from EURACTIV’s network…

President Radev in China. On an official visit to China, Bulgaria’s President Rumen Radev spoke to the World Economic Forum in Dalian, also called the “summer Davos”. Radev said Bulgaria should strive to be Asia’s economic door to Europe. He added that Bulgaria was interested in projects under the One Belt One Road initiative, as well as the 17+1 format. (Georgi Gotev, EURACTIV.com)

Serbia’s EU path not questioned. Sem Fabrizi, Head of EU Delegation to Serbia, said French President Emmanuel Macron’s statement that the EU should oppose enlargement until it has been reformed puts Serbia’s future EU membership into question. “I do not see that reforms and enlargement should be viewed separately”, Fabrizi said. (beta.rs, EURACTIV.rs)

Legal measures against companies working for Turkey. Cyprus has initiated legal proceedings against three companies involved in illegal gas drilling by Turkey in its Exclusive Economic Zone, a senior foreign ministry official said on Tuesday. Officials declined to name the companies, but said they were not Turkish, according to Reuters.(Theodore Karaoulanis, EURACTIV.gr)