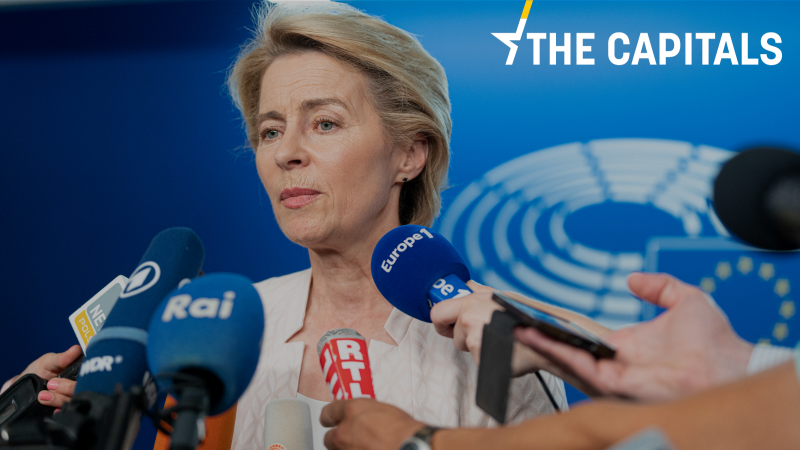 The Capitals brings you the latest news from across Europe. [EPA/PATRICK SEEGER]

As well as the numbers, German Commission president nominee, Ursula von der Leyen, should also consider the majority “colour” of EU lawmakers who will support her, a Socialist source has told EURACTIV.com.

“At the end of the day, she will not have any problem to achieve a majority. But politically speaking, the colour of this majority is what matters,” the source said.

Greens and the Left have already announced that they won’t support von der Leyen for the Commission top job.

Italian Socialists are skeptical for the lack of answers during the hearing: “When MEP Roberto Gualtieri asked her opinion on the investment plan and the golden rule, he got no answer”.

But both Italy’s co-ruling parties, Five Star Movement and Lega, are willing to back von der Leyen’s bid. The Italian 42 votes may be crucial at the end.

Rumours in Brussels suggest that right-wing Lega held negotiations with von der Leyen in the last few days, asking in return the green light for the appointment of Salvini’s right arm Giancarlo Giorgetti as Italian Commissioner.

Five Star Movement’s delegation in the European Parliament also had a “positive meeting” with the designated president on 10 July. “We share the same priorities,” said group leader Tiziana Beghin.

According to the socialist source, von der Leyen will need to count on the support of the European Conservatives and Reformists (ECR) and far-right Identity and Democracy (ID), but then “she has to be aware her confirmation will be based on a ‘right-wing-to-right’ majority”.

Although the ECR said it considers itself close to von der Leyen’s views, the group is deeply split over whether it will grant her support, a party source told EURACTIV.

The Visegrad Four – Czech Republic, Slovakia, Poland and Hungary – initially supported her candidacy to avoid the EU’s rule-of-law paladin Frans Timmermans in the position. Compared to him, von der Leyen is seen by them as “softer” on the issue.

However, she said during the hearings that she would like to have the Dutchman continue to be in charge of the portfolio, which could eventually swing them away from her, some suggest.

But while the Hungarian Fidesz party is likely to act as “good EPP boys”, the Polish Law and Justice (PiS) party, the strongest force within the ECR, might reconsider, especially after the “cordon sanitaire” was applied to them in during the Parliament’s committee chair selection.

Polish MEP Zdzislaw Krasnodebski (ECR) said a final decision is due on Monday.

Far-right scandals. Kris Van Dijck, from the New Flemish Alliance (N-VA), has been forced to resign from the presidency of the Flemish parliament after accusations of being involved in a fraudulent bankruptcy case, while last week he was under fire for a drunk driving accident. Dijck’s departure has swept first vice-president, Filip Dewinter (Vlaams Belang) to the helm of the chamber, effectively making him the first extreme-right representative holding this position. (Alexandra Brzozowski, EURACTIV.com).

Greens popular by all age groups, except seniors. The Greens are getting popular with all age groups, according to a poll released on 11 July by Spiegel online. In the voters’ groups aged between 18 and 64, the Greens are at least on par with the conservatives from the CDU/CSU.

Only the voter group aged 65 onwards is still clearly in favour of the CDU and CSU (37%) while the Greens and social democrats (SPD) are only about half as strong. (Claire Stam, EURACTIV.de)

The socialist hegemony. The leader of the French Socialists, Olivier Faure, told EURACTIV’s partner EFE in an interview that socialists, especially in Portugal and Spain, should reaffirm at the EU level the hegemony they have been deprived of.

“We have socialists who are too modest about the role and the influence they could have, and I think Pedro (Sanchez) could be one of those who reaffirm that leadership,” Faure said.(EURACTIV’s partner EFE).

Social injustice. The UK will establish a new body to tackle “deep-rooted injustices” and create a more just society, Prime Minister May has announced.

The Office for Tackling Injustices (OfTI) will present future Governments with the means to close the equality gap across a number of disparities including socio-economic background, ethnicity, gender, disability and sexual orientation. (Samuel Stolton, EURACTIV.com).

Hahn’s renomination. Austria’s interim Chancellor Brigitte Bierlein wants Johannes Hahn to remain part of the College of Commissioners, Austria’s press agency APA reports. “In the light of the discussions so far with the parties represented in parliament, I intend to propose to the government the nomination of Mr Hahn,” Bierlein said.

Deadly storm. Seven people, including two children, were killed and more than 120 injured as a result of the extreme weather conditions that struck Chalkidiki, a major tourist destination in Macedonia. More than 80% of the area was left without power and severe damages were reported to infrastructure. (Theodore Karaoulanis, EURACTIV.gr)

EU measures against Turkey. The COREPER is finalising today the measures against Turkey should the country continue the illegal drilling activities off the coast of Cyprus. A decision is due at a foreign affairs ministers meeting on Monday. According to Reuters and Cyprus media, the measures include fewer funds for pre-accession assistance and revision of the European Investment Bank (EIB) lending to Turkey, as well as the freezing of any high-level talks. (Theodore Karaoulanis, EURACTIV.gr)

Čaputová in Hungary.“For our cooperation (in the V4) to be meaningful, it must not be only about protecting regional interests. It must be about promoting democratic values, values of freedom and the rule of law and also values of the European integration […] so that we are not being perceived as those who divide or weaken the EU”, Slovak President Zuzana Čaputová said during a meeting with Hungarian President János Áder in Budapest.

Ticking clock. The Czech Republic only has a 30-day deadline, instead of the usual two months, to reply to a European Commission draft audit report concerning PM Andrej Babis’s possible conflict of interest in drawing money from EU funds, the iROZHLAS.cz radio server reported. The EU executive has not given the reasons for a shorter deadline. (Ondřej Plevák, EURACTIV.cz)

Still no decision on embassy in Israel. PM Viorica Dancila seemed to back down from previous remarks on moving the Romanian embassy in Israel to Jerusalem. Dancila said in an interview that the government finalised an analysis on the proposed embassy move from Tel Aviv that was sent to institutions involved, including to President Klaus Iohannis.

She said the decision to move the embassy was in the president’s hands, but Iohannis has said nothing so far. Last March, Dancila told a conference in Washington that Romania would move the embassy to Jerusalem, a statement that drew the ire of Arab countries and might have cost Romania a seat in the UN’s Security Council. (EURACTIV.ro)

Sales of hookahs. Bulgaria’s parliament has voted to ban the sale of hookahs to people younger than 18 but rejected a proposed ban on the smoking of hookahs in indoor public places. The head of the National Assembly’s health committee Daniela Daritkova said the ban should be rejected because а procedure related to any restrictive measures for tobacco requires, under the EU Treaty and all other rules, a notification under the Tobacco Directive.

According to Daritkova, any restrictions accepted without the necessary notification could result in an infringement procedure against Bulgaria. (Dnevnik.bg)

So far, 8 candidates have officially announced their candidacy. Former PM Zoran Milanović (SDP-S&D), singer Miroslav Škoro, and MEP Mislav Kolakušić have been given the most media attention.  Current president Kolinda Grabar-Kitarović is yet to officially announce her bid. (Tea Trubić, EURACTIV.hr)

Parallel reforms. Commenting on a statement made by French President Emmanuel Macron that there would be no new EU accession until some internal reforms were completed, German Ambassador to Serbia Thomas Schieb has said Berlin’s position is that those are two separate processes, which should unfold in parallel.

“Reforms within the EU will happen for as long as it exists… It is a constant process, which does not prevent the admission of new members, provided that the candidates meet all the conditions. Serbia is carrying out difficult reforms, which will take a while; the EU is carrying out its own reforms and at some point, Serbia will join the EU,” he said. (beta.rs, EURACTIV.rs)