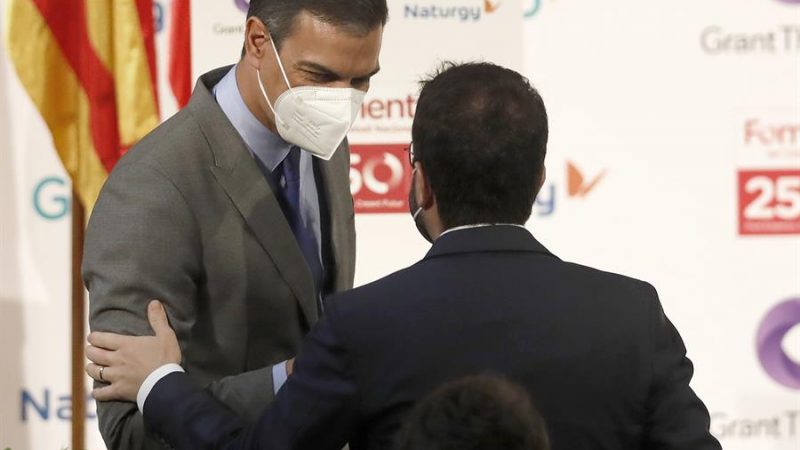 On the agenda are several proposals concerning investments for Catalonia, including more public financing for the region. [EFE/Andreu Dalmau]

Spanish Prime Minister Pedro Sánchez is set to meet Catalonia’s regional president and pro-independence leader Pere Aragonès in a bid to open a new era of political dialogue and solve the crisis between Madrid and the local government, EURACTIV’s partner EFE reports.

However, the first official meeting between the two leaders took place on Sunday (27 June) at the opening ceremony of the Mobile World Congress (MWC) in Barcelona.

The event carries hopes of kickstarting a post-COVID economic recovery, although the health crisis still weighed down the event, as less than a third of the 100,000 visitors it welcomed in 2019 are expected to take part this year.

On Tuesday, the chief of the Spanish government is scheduled to discuss with Aragonès in Madrid details of what the socialist PM has called the “Agenda for the Rapprochement.”

On the agenda are several proposals concerning investments for Catalonia, including more public financing for the region.

Sources close to the Spanish government, a coalition of the socialist party (PSOE, centre-left) and left-wing United We Can (Unidas Podemos), stressed on Sunday that Sánchez will not discuss further issues.

Sánchez will also present this week before the Spanish parliament for its approval of the pardons of the nine pro-independence leaders released from prison last week, EFE reported.

He will address parliament to explain details of this extraordinary measure and will discuss the “political and economic situation” in the country as well as the latest extraordinary EU Councils held in May and June in Brussels.

But far beyond the photos of the meeting, the final objective of the Spanish government and the regional Catalan executive is to boost and improve the deteriorating relationship between Madrid and Barcelona.

According to sources from both executives quoted by El País on Sunday, Sánchez and Aragonès want to establish regular political contact.

However, the Spanish government has made clear that pardons granted to the nine Catalan separatist leaders cannot be interpreted as a concession. Red lines for Madrid include the self-determination of Catalonia and the amnesty of all those indicted.

The nine politicians, including former regional vice-president Oriol Junqueras, were in 2019 sentenced to between nine and 13 years in prison for sedition and misuse of public funds.

Pro-independence parties have called for full amnesty and an independence referendum and said the pardons were not enough to resolve the conflict with Catalonia.

But Sanchez says the move is a goodwill gesture and a necessary step for peace and reconciliation between Spain and Catalonia.

The events of 2017 brought Spain to the brink of a constitutional crisis. Then prime minister, Mariano Rajoy of the conservative Popular Party, activated a constitutional article that temporarily stripped Catalonia of its autonomy and dissolved its parliament.