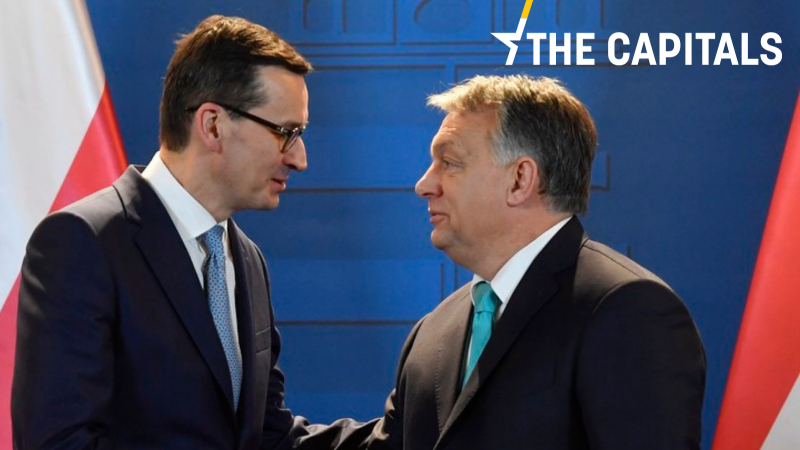 Before you start reading today’s edition of the Capitals, feel free to have a look at our Network story Terrorism and Muslim communities: Europe’s ‘right’ battle.

Call for better EU crisis management. In a non-paper seen by EURACTIV, the Netherlands, together with Sweden and Romania, is calling for “enhanced coordination and communication” between member states in times of crisis. The push comes as the EU has struggled to respond to the initial stages of the COVID-19 pandemic. Read more.

In a letter to EU leaders, Polish Prime Minister Mateusz Morawiecki threatened to veto the EU budget if the payment of funds is made conditional on members adhering to the rule of law.

With this expected step, he echoed previous threats by Hungarian Prime Minister Viktor Orbán, who had stated in a letter of his own, that “Hungary is committed to cooperation, in the light of developments, it cannot provide the unanimity required for the package adopted in July.”

Both Warsaw and Budapest do oppose the mechanism, but Morawieck’s comments were less critical and literal than those by his Hungarian counterpart’s. Read more.

Russia hits Germany, France with counter-sanctions. Russia announced that it will be placing tit-for-tat sanctions on individuals in France and Germany in an escalation stemming from the poisoning of Russian dissident Alexei Navalny. Read more.

France’s lockdown rules remain in place. The “lockdown rules will remain unchanged” despite the number of new COVID-19 cases having “slowed down since a week” by about 16%, Prime Minister Jean Castex announced. “This recent trend is fragile and can only produce results if it is confirmed over time,” he warned.

Lifting or lightening lockdown rules as of today would be “irresponsible”, as would the organisation of major end-of-year celebrations, he added. It is possible, however, that measures are relaxed for shops as of 1 December, though bars and restaurants will not be affected. (Louise Rozès Moscovenko | EURACTIV.FR1)

Apologise for Labour’s Brexit policy. Labour party’s internal divisions over Brexit have been underscored again by a new report by Ian Lavery and Jon Trickett, both members of ex-leader Jeremy Corbyn’s shadow cabinet, who have called for the party to issue a ‘”full-throated apology” for its stance on Brexit.  Read more.

Martin says Biden wants Brexit deal. Irish Prime Minister Micheal Martin said on Thursday that the US administration under incoming President Joe Biden would like to see a trade deal between the EU and the UK and that Johnson’s government should start working seriously to get one. Read more.

Values over geography, says Finnish foreign minister. Finland’s foreign policy will no longer concentrate on geopolitical matters and realpolitik as it has done for years due to its location, but will widen its scope with a value-based approach, Foreign Minister Pekka Haavisto (Greens) told tabloid Iltalehti in a discussion about the country’s foreign policy and special relationship with the US on Wednesday. Read more.

Alcohol ban to counter COVID-19 infection rise. After Sweden has opted for an anti-lockdown approach in the first wave, new infections and hospital admissions in a second wave have raised doubt about the light measures. Read more.

Greek PM blames young people for COVID-19 resurgence. Greece’s conservative PM Kyriakos Mitsotakis triggered a wave of reactions after he told the parliament on Thursday that young people are to blame for the critical COVID-19 situation in the country. Read more.

Babis’ conflict of interest debacle: A never-ending story. The European Commission remains convinced that Czech Prime Minister Andrej Babiš continues to exert control over the large business conglomerate he founded, despite having placed it into trust funds. Read more.

Leaked tapes: in public television, we don’t support ‘opposition’s cooperation’. According to leaked recordings of an editorial meeting in March 2019 of Hungarian public broadcaster  MTVA, Balázs Bende, head of the foreign media cabinet of the public media, and Zsolt Németh, channel director, allegedly told their employees that “everyone is aware that there are European Parliament elections at the end of May, and I am sure that no one will be surprised if I say that this institution… does not support the opposition’s cooperation.”

Telex quoted Radio Free Europe’s reporting saying: “If this statement is unexpected to anyone, they should go home now.” (Vlagyiszlav Makszimov | EURACTIV.com)

Slovak government lagging behind with recovery plan, says opposition. Opposition MEP Michal Šimečka (Renew, Progressive Slovakia) has criticised the Slovak government for lagging behind with the National Recovery Plan. This would result in Slovakia receiving the first part of the financing later than other countries, some of which might already be ready in January, the opposition MEP added.

While the country’s finance ministry has acknowledged a likely four-month delay (until the latest deadline in April), the ministry also stressed the importance of “the quality of the Recovery Plan, not scaremongering“. (Zuzana Gabrižová | EURACTIV.sk)

Opposition slams government’s tax reform proposal. The Croatian government’s tax proposal, which aims to lower income tax rates from 24% to 20% and from 36% to 30%, has been criticised by the opposition – during a debate on four bills from the fifth round of the tax reform – for benefitting the rich and increasing inequalities in society.

1.8 million of the 2.8 million workers who are subject to income tax are currently unable to pay it due to their level of income, Finance Minister Zdravko Marić has said. Marić concluded that the proposed tax policy would serve to encourage a positive business climate, investments and wage growth as well as improve citizens’ living standards. (Željko Trkanjec | EURACTIV.hr)

Slovenia to tighten lockdown for two weeks. Slovenia will tighten its lockdown for two weeks, meaning it will shut down public transport and close all non-essential stores. Schools and kindergartens will remain closed. All gatherings, except for persons in the same household, will be completely banned.

30 more days. Romania prolongs the state of alert with another 30 days, starting 14 November, as the number of coronavirus infections are at around 10,000 daily, while hospitals are almost at full capacity.

Prime minister Ludovic Orban said no other restrictions will be introduced besides the ones already enforced this week – closing of all schools, mandatory masks and additional limits to public events, even if the election campaign is ongoing for the general elections of 6 December. (Bogdan Neagu, EURACTIV.ro)

Refugees & migrants in Serbia: ‘The situation is not out of control’, says UNHCR. Asylum and reception centres in Serbia currently host around 6,000 migrants and refugees, while another 1,000 of them are estimated to be staying outside the centres, UNHCR Representative in Serbia Francesca Bonelli said on Thursday. Read more.

Helić stated that he is not on the video that shows a man and a woman having sex. The mayor has said that the video is a bad fabrication that came from the camp of his competitors. (Željko Trkanjec | EURACTIV.hr)

One response to “Poland and Hungary unite to veto EU budget”