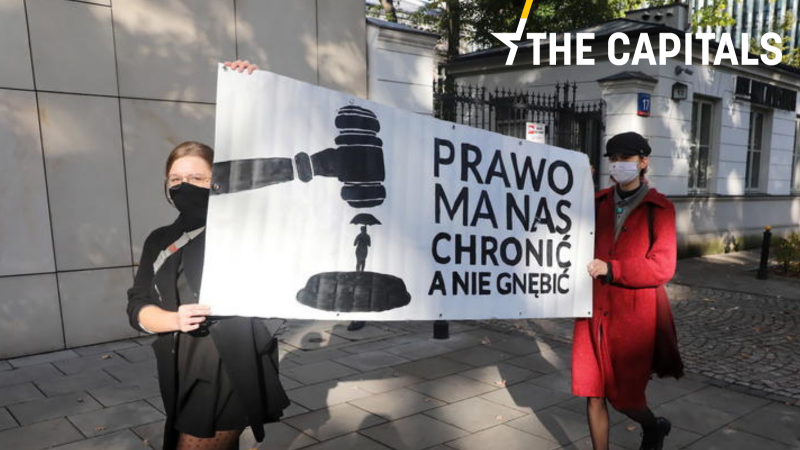 Before you start reading today’s edition of the Capitals, feel free to have a look at the article NATO seeks ways of protecting undersea cables from Russian attacks by Alexandra Brzozowski and the Incoming Portuguese Presidency calling for ‘significant’ investment into e-Government, written by Samuel Stolton.

Once the ruling enters into force, ending a pregnancy in the largely Catholic country will be permissible only in cases of incest, rape or a threat to the mother’s health, which make up only about 2% of legal terminations conducted in recent years.

A group of MPs from the ruling Law and Justice (PiS) party and other right-wing parties had taken the case to the tribunal, claiming that existing legislation infringed the constitutional principles of human dignity and protection of human life.

The development pushes Poland further away from the European mainstream, as the only EU country apart from Malta, which prohibits the practice entirely, to severely restrict access to abortion.

Read more background and reactions from Poland and the EU here.

Convicted to jail MEP to continue getting paid. A Greek court sentenced on Thursday the “directors” of the neo-Nazi Golden Dawn party to up to 13.5 years in prison for “running a criminal organisation”.

Most of them have already surrendered but the case of MEP Ioannis Lagos seems to be stuck in Brussels bureaucracy as in order to be arrested his immunity has to be lifted. Read more.

38 additional departments under curfew. “The progression of the pandemic leads us to extend curfew measures to 38 new departments and one overseas area,” Prime Minister Jean Castex announced on Thursday as the country recorded 41,622 new COVID-19 cases within the past 24 hours – nearly twice the amount recorded the previous day. Read more.

Lockdown or no lockdown? With rising infections rates, health experts and politicians are torn whether to return the country into a full lockdown as in spring or continue targeted partial measures. Read more.

Viennese mayor to choose coalition partner by Tuesday. Following the Viennese elections that brought a landslide win for the Social Democrats and a massive loss for the far-right FPÖ, old and new mayor Michael Ludwig (SPÖ) will be choosing the party with which to start formal negotiations to form the regional government.

Vienna’s mayor has three options: the Greens (with whom the SPÖ governed Vienna for ten years), the liberal NEOS and the conservative ÖVP. According to many observers, only the two first options are politically viable. (Philipp Grüll | EURACTIV.de)

‘Compromises on both sides’ needed. “Every day counts,” EU chief negotiator Michel Barnier told reporters as he re-started face-to-face negotiations with UK counterpart David Frost in London on Thursday. The UK side agreed to resume talks after Barnier told MEPs that “compromises on both sides” were needed to conclude an EU-UK trade deal, in a speech in the European Parliament on Wednesday. Read the full story here.

Finland considers EU to be a means to foster security. Finland sees the EU increasingly as a means to enhance the country’s security and a barricade against geo-economic threats, according to a new research paper published on Thursday by the Finnish Institute of Foreign Affairs (FIIA). The report marks the country’s 25-year-long EU membership. Read more.

Quick COVID-19 tests in pharmacies. In addition to regular testing options, fast-result COVID-19 tests will be conducted in pharmacies, Health Minister Roberto Speranza confirmed on Thursday as the number of infections hit a new daily record in Italy with 16,079 new infections registered and 136 deaths in the last 24 hours. Read more.

Universal use of masks imposed. Greece has imposed stricter measures to fight the second wave of the COVID-19 pandemic. Masks are mandatory everywhere, not only indoors but also outdoors. More on the new measures here.

Hungary prepared to buy Russian, Chinese COVID-19 vaccines. The government asked the coronavirus task force to examine the Russian and Chinese vaccines with the involvement of experts, said the head of the prime minister’s office, Gergely Gulyás.

“Of course, we are prepared to buy from these countries or those manufacturing companies that own the vaccine, if and to the extent that these vaccines provide real protection,” Gulyás told reporters on Thursday. (Vlagyiszlav Makszimov | EURACTIV.com)

Top prosecutor detained. The National Criminal Agency detained Special Prosecutor Dušan Kováčik on Thursday on various criminal charges, including organising a criminal group, corruption and misuse of power. As he is to remain in custody for the time being, the Prosecutor General’s decision on whether to suspend his duties is pending. (Zuzana Gabrižová | EURACTIV.sk)

Bulgaria in desperate need of doctors. As Bulgaria reported a record number of 1,472 new daily COVID-19 infections and 29 related deaths on Thursday, the biggest concern for the Bulgarian authorities is the lack of doctors in hospitals. Read more.

Slovenia ramps up COVID-19 measures as ‘week of struggle’ awaits. Slovenia will put in place new restrictions – similar to those adopted during the spring lockdown – to limit the spread of coronavirus that will enter into force on Saturday (24 October) and last for a week, Prime Minister Janez Janša announced.

“Next week will be a week of struggle, a week in which we must restrain the virus,” Janša said. The measures include the closure of non-essential shops, kindergartens and student dormitories, with some exceptions. (Željko Trkanjec | EURACTIV.hr)

Pandemic cannot slow down reforms, stakeholders warn. The coronavirus pandemic must not slow down the reforms and the European integration of the Western Balkans, participants of a panel discussion at the Belgrade Security Forum said on Thursday, attended by EU Enlargement Commissioner Oliver Varhelyi. Read more.

Head of a security-intelligence service indicted for abuse of power. Prosecutors have indicted Osman Mehmedagić, director of the security-intelligence agency, OSA. Prosecutors argue Mehmedagić abused his power by trying to identify the person who reported him for having an invalid university diploma and lacking the necessary qualifications for his job.

Mehmedagić has been at the helm of OSA since 2015 and is now running for another term, but the biggest obstacle to his reappointment is the fact that he cannot prove to have a valid university diploma. (Željko Trkanjec | EURACTIV.hr)

The IHRA, an intergovernmental organisation with 34 member countries, established an international consensus on a working definition of antisemitism. “At a time when antisemitism is increasing across the world, the IHRA definition has never been more important,” said Combat Antisemitism Movement director Sacha Roytman-Dratwa. Next week, the first-ever Balkans Forum Against Anti-Semitism will be held in Albania. (Željko Trkanjec | EURACTIV.hr)