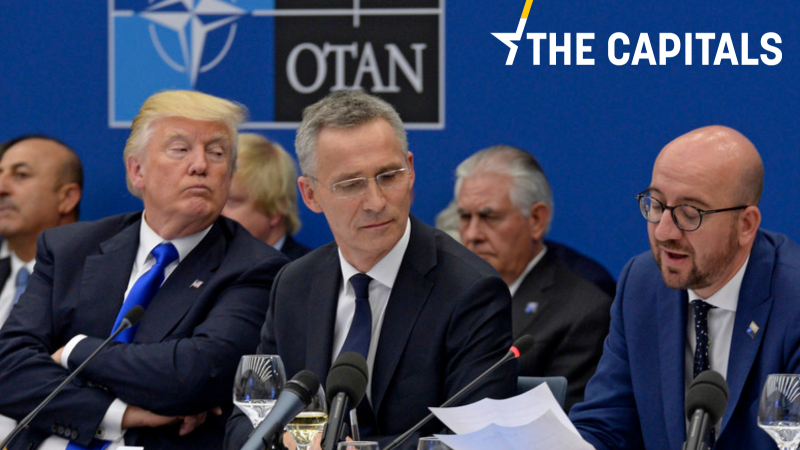 Morawiecki went on to say that Poland's interest includes "the strengthening of NATO and the transatlantic community in the face of threats behind our eastern border, both near- and far-eastern threats, where China's power is growing and we can't bury our heads in the sand." [EPA/THIERRY CHARLIER]

Before you start reading today’s edition of the Capitals, feel free to have a look at the article “Digital Services Act should avoid rules on ‘harmful’ content, Big Tech tells EU” by Samuel Stolton.

Poland should act as ‘the integrator’ within the transatlantic community, Polish Prime Minister Mateusz Morawiecki said on Sunday as he summed up the 10th Congress ‘Poland: A Great Project’ – the most important meeting of opinion-forming conservative circles in Poland. Read more.

“The transatlantic community which so far has been building a foundation for economic and political stability through ‘Pax Americana’ is shaking. Undoubtedly, we also need to rethink the role of Poland in Europe within the transatlantic community, of Poland as the integrator,” said, the prime minister, noting also the current turbulence caused by the COVID-19 pandemic. EURACTIV Poland has more.

LEAK: EU’s draft methane strategy puts onus on data, reporting. A draft version of the European Commission’s methane strategy, due to come out on Wednesday (14 October), doesn’t set limits on methane emissions from fossil fuels, instead setting the stage for that to happen as of 2025. Full story here.

‘Last phase’ before lockdown. As Belgium over the weekend ranked second place in Europe in terms of COVID-19 infections, health minister Frank Vandenbroucke said he cannot guarantee there will be no second lockdown. Read more.

Social democrats defend throne in Vienna elections. The Social Democrats (SPÖ) defended their top position with 42% of the votes (up 2.4%) in the Viennese state election on Sunday (11 October), making them the undisputed rulers of Austria’s capital, thus dubbed “Red Vienna”. Their former main challenger, the right-wing FPÖ, lost 23% of the votes, most likely a belated punishment for last year’s „Ibiza-scandal“ where then party leader and Vice-Chancellor Heinz Christian Strache was secretly filmed peddling political influence. Read more.

New lockdown rules target Liverpool. Liverpool is set to be subject to the tightest new local lockdown rules in England when the government’s new ‘three-tier’ system is announced on Monday. Merseyside, which includes Liverpool, is expected to be the only part of England to face the tightest restrictions, which will include the closure of pubs and restaurants, while travel in and out of the areas will only be for school, work, or transit. Read more.

In other news, Ireland registered the highest number of COVID-19 infections in a single day, 1,012 new cases, almost double the average for the past week, Reuters reported.

Restrictions tightened, but no new lockdown. Though Italy is tightening its COVID-19 restrictions by imposing the mandatory use of face masks indoors and outdoors even while walking but not running or jogging, Italian Foreign Minister Luigi Di Maio said that “Italy cannot face another lockdown. Its economic and commercial systems could not sustain it.”

“In February we were all unprepared, now we can face the emergency situation. Intensive care units are ready,” said the foreign minister, adding that the first doses of a COVID-19 vaccine could be ready before the end of the year. Read more.

The two leaders who want to cooperate in areas such as hydrogen, a joint 5G network, a battery value chain and satellites technology, confirmed that these projects could be included in their respective EU national recovery plans, to be financed with EU funds. Read more.

Oruç Reis is back. The much-awaited exploratory talks between Greece and Turkey face a fresh stalemate as Turkey has decided to re-escalate by sending back Oruç Reis vessel to Greece’s continental shelf, south of the island of Kastelorizo. More.

Sentences against Golden Dawn. The Greek court is expected to announce today the sentences against neo-Nazi Golden Dawn party which was branded last week as a criminal organisation. The court will decide whether there are grounds for recognising mitigating circumstances, something that will eventually affect the sentences of those convicted. More.

‘Best in covid’. As the Czech Republic has recorded 432 new COVID-19 cases per 100,000 inhabitants over a 14-day period – the worst figure compared to its EU partners – Prime Minister Andrej Babiš is facing strong criticism for the speech he gave at the Bled Strategic Forum in September, where he said: “We have results in the V4 – best in COVID.”

With such figures, the Czech government has imposed stricter coronavirus restrictions, forcing bars to close at 8pm and banning all cultural and sports events. Although stricter measures should be imposed on Wednesday (14 October), the government has not yet confirmed any details. Still, the Czech PM has not ruled out imposing a lockdown. (Aneta Zachová | EURACTIV.cz)

Fidesz majority in parliament secured. Zsófia Koncz won the by-election in the Tiszaújváros – Szerencs constituency with 50.9% of the vote, securing Fidesz’s two-thirds supermajority in the Hungarian parliament on Sunday. Read more.

In other news, Hungarian Prime Minister Viktor Orbán wants to buy Budapest airport from GIC, Singapore’s sovereign wealth fund, a Canadian pension fund, and AviAlliance, an airport management company. The airport, which was one of the world’s fastest-growing mid-sized hubs before the pandemic, is valued at HUF 700-800 billion (€ 2.245 billion), meaning the government would need a partner to buy out the current owners. Read more.

In other news, Economic research institute GKIʼs gauge of consumer confidence slipped to -34.2 points in October compared to September’s -31.1 points. In other words, there was a drop for the third month in a row after three consecutive months of improvement following a pandemic plunge in April, according to a report by state news wire MTI. (Željko Trkanjec | EURACTIV.hr)

Slander resolution. The European Parliament’s resolution on the rule of law and fundamental rights in Bulgaria is “slander” and “hog-wash”, Bulgarian MEP Alexander Yordanov (EPP) told the National Radio Yordanov in an interview, where he also described Bulgarians who have been protesting in the streets calling for the government and general prosecutors to resign “simpletons” and “lumpen”.

“Everything in Bulgaria is normal! Between 100 and 200 people are protesting, let them protest. This is normal. We saw them last night in front of the Bulgarian National Television. They were absolute simpletons, not protesters”, he said on Sunday.  (Krassen Nikolov | EURACTIV.bg)

Austrian president apologises to Slovenian minority. Austrian President Alexander Van der Bellen apologised to Carinthian Slovenians for the injustices and delays in the implementation of their constitutional rights as he addressed a ceremony honouring the centenary of the Carinthian plebiscite in Klagenfurt/Celovec. However, the words “Death to Fascism” were tagged on a monument in the courtyard of the Carinthian state government, to which Slovenian  Prime Minister Janez Janša responded by saying it was a “leftist disgrace that harms only the Slovenian minority in Austria” and “Slovenia’s reputation in the world”.

In other news, MEP Tanja Fajon was elected the new president of Social democrats (SD) with 169 more votes than opponent Jani Prednik. “We have a repressive government that is taking catastrophic measures and leading the country away from democracy. It has lost values, orientation, ” said Fajon, whose party now aims to become Slovenia’s strongest political force after being third for the past 12 years. (Željko Trkanjec | EURACTIV.hr)

Higher than EU average by 2030. Croatia will in 2030 be among the first ten EU member states to an employment rate higher than EU average by 2030 as it is expected to jump from 66.7% now to 75%, according to the index of economic and social digitalisation. This is the projection announced by the national development strategy, “Croatia 2030”. Meanwhile, GDP according to purchasing power parity (PPP) should jump from 65% of EU average in 2019 to 80%, reported EURACTIV’s partner Jutarnji list. (Željko Trkanjec | EURACTIV.hr)

Petkovic to lead Kosovo and Metohija office. Petar Petkovic, hitherto assistant director of the Serbian government’s Office for Kosovo and Metohija, was appointed the new head of the institution on Friday (9 October), according to announcements. Read more.

In other news, Serbian President Aleksandar Vučić said on Sunday that he didn’t have to answer when asked to “recognise Kosovo’s independence without getting anything in return, and seeing the Serbs exposed to a pogrom similar to that of 17 March 2004.”

Commenting on a statement by EU Special Representative for the Pristina-Belgrade Dialogue, Miroslav Lajčak, who said earlier that he expected the Serbian president to make “a far-reaching decision” on Kosovo, Vučić said Serbia was always prepared to discuss a variety of compromises, but that it had to be a compromise, not an ultimatum. Read more.

Frozen in the past. Though it is not uncommon for gas stations to be built in the residential areas of Bosnia and Herzegovina (BiH) both after the war and even recently, citizens have criticised the construction of these facilities, claiming they endanger their safety and health.  Indeed, the valid rulebook for building the gas stations is from – 1971, from the time of former Yugoslavia. (Željko Trkanjec | EURACTIV.hr)

“When, if not now? You signed this agreement yourself.” This is the process, and the time is right,” Lajčak told Austrian newspaper Wiener Zeitung in an interview and reiterated the EU’s stance against land swap between the two countries.

In the other news, Greek Foreign Minister Nikos Dendias visited Kosovo despite Greece being one of the five EU member states that do not recognise Kosovo. While Kosovo’s Foreign and Diaspora Minister, Meliza Haradinaj-Stublla, said she understands Greece’s position with regard to Kosovo’s independence, she also confirmed that was another reason why they are interested in developing and advancing the existing relations.

“We would welcome Greece’s decision to recognise Kosovo, but we are committed to strengthening existing relations, as well as deepening them in the right direction,” she said. (Željko Trkanjec | EURACTIV.hr)