Poland’s president visits US to get election boost 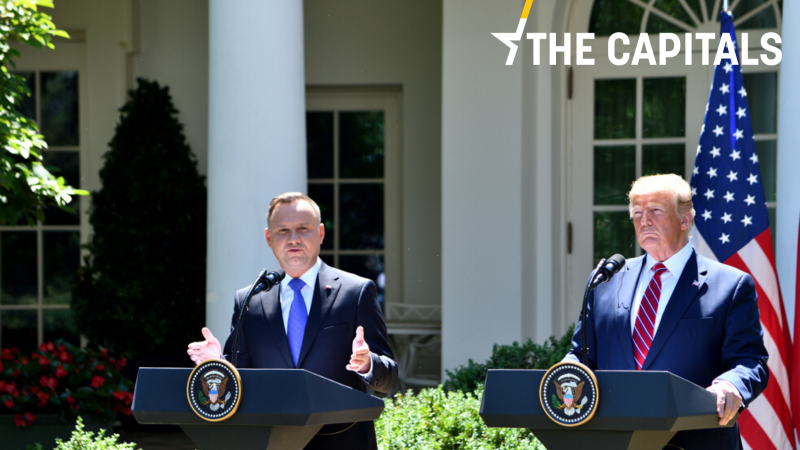 “I can say there will be good news from Washington,” Krzysztof Szczerski, the president’s chief of staff, said on Monday (22 June). [Shutterstock/Evan El-Amin]

Before you start reading today’s edition of the Capitals, feel free to have a look at the article “Von der Leyen: Chinese cyberattacks on EU hospitals ‘can’t be tolerated’” by Samuel Stolton.

Now that many European countries are starting to embrace a ‘new normal’, make sure you stay up to date with EURACTIV’s comprehensive overview, which is regularly updated with the help of our network of offices and media partners. Also, check our country update pages, such as the one for Portugal and Croatia.

WARSAW. Polish President Andrzej Duda heads to Washington to meet US President Donald Trump on Wednesday (24 June), only four days before presidential elections in Poland on 28 June. The last-minute visit to the White House is expected to give Duda a boost in the polls, with it being quite unusual for Washington to give this kind of election support to other countries’ leaders.

“I can say there will be good news from Washington,” Krzysztof Szczerski, the president’s chief of staff, said on Monday (22 June). “There will be three main topics: first of all, health, secondly, investments and development, and third, security.”

Possible criminal charges against a taz journalist. German Interior Minister Horst Seehofer (CSU) is contemplating criminal charges for the author of a satirical piece published on the media outlet taz. Critics accuse him of infringing press freedoms and Chancellor Angela Merkel has reportedly weighed in on the matter. EURACTIV Germany’s Sarah Lawton looks into what had caused such an uproar.

Macron in The Netherlands to discuss Recovery Fund. Emmanuel Macron will meet Dutch PM Mark Rutte in an effort to find a way out of the deadlock on EU Recovery Fund talks. The Netherlands is leading the “Frugals” group that opposes the Commission’s proposal for grants. Instead, they want loans with strict conditions. Read more.

Second lockdown? Belgians approve. A majority of Belgians (71%) said they would be ready to undergo a second lockdown if the country was hit by a second wave of the pandemic, a new 7sur7 survey shows. Respondents in Flanders were less favourable (66%) to the measure than those in Brussels (75%) and Wallonia (78%). (Alexandra Brzozowski | EURACTIV.com)

Austrians caught in the middle of Wirecard scandal. German financial service provider Wirecard admitted to a €1.9 billion hole in its balance sheet, which happens to be implicating some Austrian banks and businessmen.

Among the lenders are Raiffeisenlandesbank Niederösterreich-Wien (€60 million) and Raiffeisenlandesbank Oberösterreich (€45 million). On top of that, the two prime suspects –  former CEO Markus Braun, who stepped down last week, and COO Jan Marsalek, who was suspended on a revocable basis – are Austrian nationals. According to media reports, the two could face pre-trial detention. (Philipp Grüll | EURACTIV.de)

Expensive Finland. The price of alcohol, tobacco and food in Finland is making waves across the country’s media particularly with the price of alcohol being the most expensive in the EU as it is 91% above the EU average, according to a Eurostat survey.

For Finland’s non-drinkers, there was some consolation, as non-alcoholic drinks were only 26% more expensive than in other member states. EURACTIV’s Pekka Vänttinen looks into how pricy it is to get a pack of smokes and a bite to eat in Finland.

A ‘bridge over troubled water’. Finland is offering to help Sweden tackle the coronavirus crisis, which remains difficult for mining communities in the north, Finnish Interior Minister Maria Ohisalo (Green) told Swedish broadsheet Svenska Dagbladet on Sunday (21 June). This comes after the Finnish government decided to keep travel restrictions in place for Sweden, which was not well-received in Sweden.

“I’m saying this on behalf of the whole Finnish government that it would be utterly important to return to a normal situation with Sweden. We have a continuous connection with each other and Finland is ready to help in intensive care and testing – in any way possible. We are here. We are ready for you,” said Ohisalo, who is building ‘bridges over troubled water’. Read more.

Temporary VAT cut? “A VAT reduction has been brought into discussion during the meetings with trade unions and business representatives,” said Italian Prime Minister Giuseppe Conte, adding that “we are evaluating the possibility of a temporary reduction, but only for a short period of time.” However, he did note that it would be a “costly measure”.

Bank of Italy Governor Ignazio Visco confirmed the need for a structured plan to tackle the crisis. “The current situation is too uncertain to make reasonable predictions”, Visco said, highlighting the importance of an efficient bureaucracy, a quicker justice system and for the investment of EU funds to be well-planned as these “need to be spent wisely on infrastructures and useful projects”. (Alessandro Follis | EURACTIV.it)

Spain enters ‘new normal’. Spain started its first working day entering a ‘new normal’ on Monday (22 June) after 98 days under a state of alarm due to the coronavirus pandemic. On Monday, train and bus stations had more passengers and services have been increased compared to the previous week, when many restrictions had been lifted, EURACTIV’s partner EFE reported.

In a bid to boost the country’s economy just in time for the summer season and support a tourism industry that represents more than 12% of Spain’s GDP, all business activities have been allowed to resume. Travellers from other Schengen countries – except for those coming from Portugal who will have to wait until 1 July – were able to cross the border into Spain as of Sunday (21 June) without having to undergo a two-week quarantine period.  EURACTIV’s partner EFE takes a closer look.

Gatherings of more than ten people and the general closure of stores at 8pm except for restaurants are among the main reimposed restrictions. As of Monday, Portugal recorded 39,392 confirmed COVID-19 cases and 1,534 deaths since the beginning of the coronavirus pandemic. (Pedro Morais Fonseca, Lusa.pt)

Editor in chief booted off management board. The editor in chief of Hungary’s most popular news website, Index, Dull Szabolcs, will no longer be part of the publication’s management board for making public internal decisions, Bodolai László, Chairman of the board of trustees of the foundation that owns the news portal told staff on Monday (22 June), 444.hu reported.

Szabolcs warned on Sunday (21 June) about a planned overhaul that would jeopardise Index’s freedom to publish stories critical of Prime Minister Viktor Orbán’s government. At the meeting, it was reportedly decided that the editorial management will devise the guarantees necessary for dialling back the internal independence barometer that was set to “in danger” from “independent” on Sunday. Read more. (Vlagyiszlav Makszimov | EURACTIV.com)

Abortions on the agenda again. As a result of the more conservative composition of the new parliament following elections in February, Slovakia is on track to changing its abortion legislation. EURACTIV Slovakia’s Zuzana Gabrižová takes a closer look.

Prosecutor’s office interrogates prime minister. Prime Minister Boyko Borissov, Finance Minister Vladislav Goranov and the chairwoman of the budget committee in the country’s National Assembly, Menda Stoyanova, were interrogated as witnesses in a criminal case against businessman Vasil Bozhkov, who is hiding in Dubai. Bozhkov is accused of a total of 18 financial and tax-related crimes, but more than half a month ago he filed a complaint with the prosecutor’s office against the PM himself.

While Bozhkov claims to have handed over €33.5 million in bribes to Borissov and Goranov through intermediaries for protection over his lottery business, the PM denies the allegations, saying Bozhkov had only given him one cigar. (Krassen Nikolov | EURACTIV.bg)

Government readies army funding bill. The government has announced a bill on investments in the armed forces, under which €780 million will be allocated to the army between 2021 and 2026. Most of the funds, or some €408 million, will be used to purchase 8×8 and 4×4 armoured vehicles compatible with NATO standards, but the purchase of an aircraft and two helicopters is also planned. The government will debate the bill on Wednesday.

In other news, Foreign Minister Anže Logar and his visiting Austrian counterpart Alexander Schallenberg told reporters in Ljubljana they will do everything in their power to make sure the shared border is not closed again due to COVID-19. (Zoran Radosavljević | EURACTIV.com)

In other news, the head of a special election assessment mission of the OSCE Office for Democratic Institutions and Human Rights (ODIHR), Urszula Gacek, said on Monday (22 June) in Belgrade that Serbia’s general election had been marked by political polarisation and an opposition boycott. Read more.

The head of the CRTA election observation mission, Rasa Nedeljkov, said on Monday (22 June) that Serbia’s election had met the “minimum” democratic standards, adding that the CRTA observers recorded irregularities at 8% to 10% of the polling stations, twice as many as in the 2016 and 2017 polls.

Nedeljkov said at a press conference that the parliamentary, provincial and local elections in Serbia amounted to “the worst election process” the CRTA observers had ever analysed.

“Secrecy of the vote and one-man-one-vote principle have been violated, votes were purchased, the pressure was exerted on voters outside the polling stations, ballot papers were photographed, there were instances of public voting, voters were brought in to vote, parallel records were kept,” said Nedeljkov, adding that the principle of equality between political parties was also disrespected during the campaign. (EURACTIV.rs  betabriefing.com)