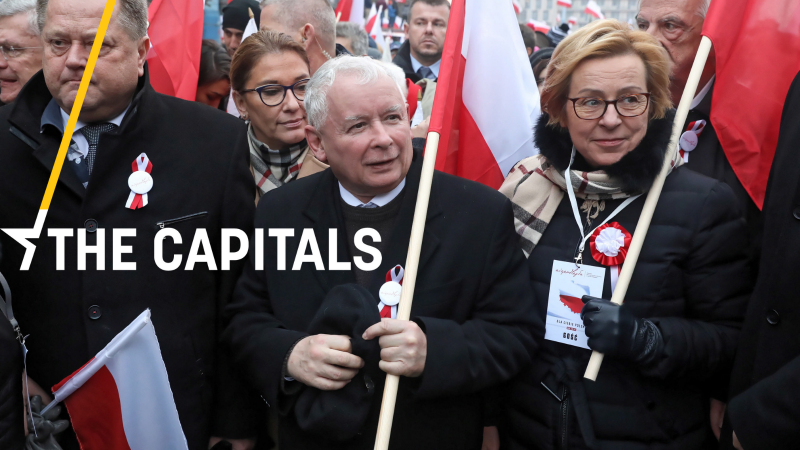 The Capitals is EURACTIV's daily newsletter from across Europe. [TOMASZ GZELL/EPA]

New Eurosceptic front?: Last week, the leader of Spanish far-right party Vox met with Jaroslaw Kaczynski, de facto leader of Poland and the chairman of the ruling conservative Law and Justice party (PiS/ECR). They talked about a potential alliance in the European Parliament after the May EU elections, and Vox leader, Santiago Abascal, said that talks “are heading in the right direction”.

Three important PiS MEPs participated in the meeting: Tomasz Poreba (chairman of the PiS European Parliament campaign), Ryszard Legutko and Kosma Zlotowski. After the meeting, Poreba said his party and Vox agreed that, “Europe should be a union of sovereign states, not a federation”.

According to PIS spokeswoman, Beata Mazurek, “the discussion was productive and may be considered a harbinger of substantive mutual cooperation after the elections”. She said that both parties “agree that national states should exercise a greater role and that Brussels’ competence with respect to mass immigration should be limited”.

“Vox is also a party that emphasises the Christian roots of the EU and wants to protect the traditional family, which is in line with PiS’s positions”, Mazurek added.

She also welcomed “Vox’s recent success in regional elections in Andalucia and high polling numbers ahead of Spain’s parliamentary elections”.

Vox is currently polling fourth in Spain, with 12-14%. These numbers could give it approximately 8 seats in the European Parliament. PiS polls as high as 41% and, according to the latest data, leads the pro-European European Coalition by 4%. (EURACTIV.pl)

In Sofia, a congress of the Bulgarian VMRO party was held on Saturday (23 March), with the participation of Javier Garcia Martin, representing VOX, who delivered a speech. VMRO is a nationalist party in coalition with Boyko Borissov’s GERB party. Until now the only MEP from VMRO, Angel Dzhambazki, has been sitting with the ECR group. (Georgi Gotev, EURACTIV.com)

Varadkar flexible on UK PM: Irish Prime Minister Leo Varadkar has said he would work with “whoever the prime minister is,” as PM May faces the prospect of a Cabinet rebellion this week. Reports on Sunday suggested that members of May’s cabinet are plotting a coup against her.

Senior Ministers dismissed the rumours on Sunday, with Environment Secretary Michael Gove and the PM’s de facto deputy David Lidington rallying behind May.

Speaking to Irish National Broadcaster RTÉ, Varadkar added that “It’s important that we make sure we’re not consumed by Brexit and we’re not defined by it.”

“So my job as taoiseach is to ensure we limit any damage to Ireland as a consequence of Brexit.” (Samuel Stolton, EURACTIV.com)

Terrorist attack prevented: Prosecutors in Frankfurt, Germany’s financial capital, arrested 10 suspects over an Islamist attack plan. According to a statement, the ten individuals were detained on suspicion of planning a terror attack using a car and guns.

SPD turns left: Some 200 SPD delegates adopted on Saturday (23 March) a manifesto for the next EU elections calling for EU-wide reforms in social security, taxation and migration policy. The push is the latest effort by the struggling SPD to win back voters after gaining just 20.5% of the vote in Germany’s 2017 national elections.

Orban’s last chance: In an interview with weekly Der Spiegel, CDU leader Annegret Kramp-Karrenbauer justified the handling of the European People’s Party (EPP) with Hungarian Prime Minister Viktor Orbán’s Fidesz party. “We all have our doubts whether Fidesz represents the values and principles of the EPP,” she said.

She added that Orban should still get a chance, but “definitely the last one”. However, Orban provoked again this weekend. (Read more) (Claire Stam, EURACTIV.de)

Podemos’s anti-elite rhetoric returns: Podemos far-left leader Pablo Iglesias returned to the frontline on Saturday (23 March), following paternity leave. At a rally, Iglesias attacked the media, the ‘powerful’ and the multinationals, that “have more power than a member of the Parliament but have not been voted.”

The far-left leader called on people to give him “enough power to change things.” In light of the rise of nationalist far-right, Podemos has lost support ahead of general elections in April. (Beatriz Rios, EURACTIV.com)

Conte’s efforts to de-escalate: Italy’s PM Giuseppe Conte announced that he is not planning to stand down after the end of his term in 2023. Analysts suggested that it was a message to Luigi Di Maio and Matteo Salvini, in an attempt to de-escalate a deepening crisis between the two ruling coalition parties, Lega and Five Star Movement.

Historic turning point: According to preliminary polls, the centre-right coalition is set to win Basilicata’s regional elections for the first time, another blow to the centre-left. Vito Bardi is expected to become governor. (Gerardo Fortuna, EURACTIV.com)

Independence Day: Greece celebrates its Independence Day, the 198th anniversary of Greek Revolution against the Ottoman Empire, on Monday (25 March). Parades are scheduled across the country, but public debate has focused on whether a military song about the liberation of Macedonia from the Ottomans should be sung or not following the North Macedonia name change deal. (Theodore Karaoulanis, EURACTIV.gr)

Progressive front: Ruling leftist Syriza party aims to create a progressive front ahead of the EU election with socialist and green movements. However, the official EU socialists’ sister party, the Pan-Hellenic Socialist Movement (Pasok), opposes it. According to Syriza secretary-general Panos Skourletis, Pasok has made a political deal with conservative main opposition New Democracy Party (EPP). EU socialists have repeatedly asked Pasok to avoid a government alliance with the conservatives. (Sarantis Michalopoulos, EURACTIV.com).

No mandatory biofuels?: Opposition parties propose the end of mandatory blending of biofuels with fossil fuels. They claim that first generation biofuels have a negative impact and do not reduce Co2 emissions. The Transport Ministry agrees with the opposition but Czech PM Andrej Babiš is strongly opposed to their proposal.

The biggest producer of biofuels in the Czech Republic is Agrofert, which used to be owned by Babiš. In 2017, he transferred all the assets of his firms to two trust funds to comply with the law on Conflict of Interests. (Aneta Zachová, EURACTIV.cz)

Embassy scandal: Romania will move its Israeli embassy to Jerusalem, PM Viorica Dancila said on Sunday at the American Israel Public Affairs Committee conference in Washington. She said the government had finalised plans to move the embassy from Tel Aviv.

President Klaus Ioannis reacted angrily by saying that the announcement demonstrated Dancila’s “total ignorance in external policy issues”. He said the PM had rushed to announce a decision that had not yet been made and added that he had not yet received any government analysis. He stated that the final decision on external policy matters rests with the President. (EURACTIV.ro)

Close to snap elections?: The Slovak government coalition is in dispute over an agreement with Washington regarding US financial assistance for the reconstruction of two military airports in Slovakia. “What (PM) Peter Pellegrini (Smer, PES) is saying in TV programmes is not important to us […] He became the PM by accident and his personal opinion has no political relevance to us. The important thing is what the chairman of Smer Party Robert Fico has to say,” the Slovak National Party said in a statement.

PM Pellegrini has not ruled out the notion of early elections. (Zuzana Gabrižová, EURACTIV.sk)

Tsacheva has denied any wrongdoing and asked the Anti-Corruption Commission to investigate the terms on which she had acquired an apartment in an upmarket Sofia neighbourhood last year. Tsvetan Tsvetanov, leader of GERB’s parliamentary group, has also denied any wrongdoing, but Deputy Sports Minister Vanya Koleva resigned on Saturday over the deals. [Background]

New banking supervisor: The Bulgarian parliament has appointed a new banking supervisor as the country prepares to join Europe’s banking union and the euro zone’s waiting room this year. Radoslav Milenkov, 46, will take over one of the four top jobs at the Bulgarian central bank and will be in charge of overseeing banks for a six-year term after the unexpected resignation of his predecessor this month. Sofia expects to join both the banking union and the ERM-2 mechanism this summer. (Dnevnik.bg)

Croatia out of  “trash”: Standard & Poor’s raised its sovereign credit ratings for Croatia to ‘BBB-/A-3’ from ‘BB+/B’, putting the country’s rating back into the investment category after six years. (Željko Trkanjec, EURACTIV.hr)

Politicians bicker over campaign funds: Croatian PM Andrej Plenković has endorsed a new law increasing the funds that can be spent on political campaigns. The opposition claims that the government wants the law so that Plenković’s party HDZ (EPP) can legitimise its “black funds”. The PM said that even with this increase, Croatia “is one of the countries with the smallest funds for campaigning in EU”. (Željko Trkanjec, EURACTIV.hr)

Serbia doesn’t want to join NATO: 79% of citizens oppose Serbia’s NATO membership, according to a survey by the Institute for European Affairs. 31% are in favour of cooperation with NATO, while 61% are against. The majority (63%) believes that NATO membership would bring no benefits to Serbia. (Beta-EURACTIV.rs)

€46 million for clean air: The European Bank for Reconstruction and Development earmarked €46 million for the construction of a new combined heat and power (CHP) plant, which will provide Zenica, the fourth largest city in BiH, with clean power. Currently, the city has a coal-powered heat plant, which has caused severe air pollution. (Željko Trkanjec, EURACTIV.hr)