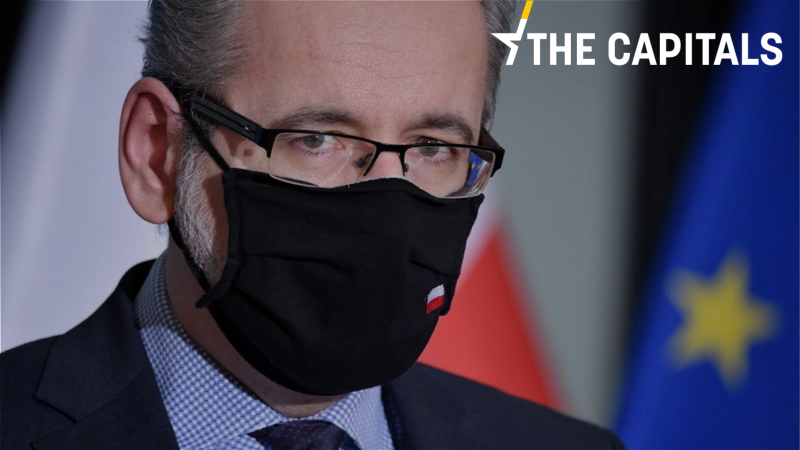 "In January we accelerated, it was not such a problem, but at the moment unfortunately it can be said that the EU’s purchasing policy will be partly responsible for the fact that we have a third wave in Europe", Niedzielski said. [EPA/EFE-Marcin Obara]

Before you start reading today’s edition of the Capitals, feel free to have a look at the article “EU ministers set to sanction Russia, speak with Blinken“.

No easing of COVID-19 restrictions in sight. No significant easing of restrictions should be expected from Friday’s Consultative Committee meeting, federal health minister Frank Vandenbroucke has warned over the weekend. Read more.

Germany mulling vaccination of schoolteachers, daycare workers earlier than planned. Germany could start inoculating primary school teachers and daycare workers as early as March, as Health Minister Jens Spahn (CDU) and Education Minister Anja Karliczek (CDU) have shown support for the idea of changing the vaccination order over the weekend. A formal decision is expected at the conference of health ministers on Monday. Read more.

Austrians increasingly unhappy with corona management. Austrians are increasingly less happy with their government’s handling of the coronavirus crisis, according to a survey conducted by the Market-institute and the Paul-Lazarsfeld-society.

While 78% of those entitled to vote said Austria handled the crisis better than other countries when Austria was under a full lockdown in April last year, this figure has now shrunk to seven per cent. Although those supporting the opposition have been critical, Green party supporters, in particular, are unhappy with how the pandemic has been handled, which could worry the party in government, as well as the country’s Green health minister, Rudolf Anschober. (Philipp Grüll | EURACTIV.de)

Luxembourg extends coronavirus restrictions until 14 March. Luxembourg’s parliament – but for the opposition parties – voted on Friday to extend COVID-19 restrictions for another month, meaning restaurants and bars will remain closed, mask-wearing in shops will remain mandatory and people must continue respecting quarantine measures.

According to the COVID-19 taskforce’s weekly report, the spread of more transmissible COVID-variants is calling for the implementation of stricter measures, such as consistent mask-wearing in schools. (Anne Damiani | EURACTIV.com)

Ireland boosts vaccination programme. Irish authorities are ramping up their vaccine programme this week, aiming to issue 100,000 vaccinations over the next seven days. Read more.

UK fintechs seek ‘cure for Brexit’ in Lithuania. Thanks in part to Brexit, Lithuania is becoming a fintech hub as a growing number of UK-linked digital financial companies are getting licences there so they can continue to operate in the European Union. Full story here.

Russia reacts to Finland purchasing US rocket system. US Congress approving the sale by the country’s Defence and Cooperation Agency (DSCA) of extended range guided multiple-launch rocket systems and related equipment to Finland worth about €76 million appears to have angered Russia. Its embassy in Washington called it a step in the wrong direction increasing regional tension in a tweet on Thursday, Finnish media YLE, STT and Helsingin Sanomat reported. Read more.

British company AstraZeneca announced a 10-15% reduction in vaccine doses planned for delivery in Italy this week because of “the complex production process”. Read more.

Italy celebrates first national COVID day. Saturday marked the first national day where Italy honoured doctors, nurses and other healthcare workers, one year after the first COVID-19 infection was discovered outside China, in Lombardy’s town of Codogno. “I express the country’s deepest gratitude to all those who with professionalism and self-denial have found themselves, and still find themselves, at the forefront of facing the pandemic emergency,” said Italian President Sergio Mattarella.

Riots over rapper’s imprisonment enter fifth night. Barcelona and several other Spanish cities woke up on Sunday morning to looted stores and damaged property after a fifth consecutive night of protests calling for the release of rapper Pablo Hasel. Read more.

PM Babiš wants to cancel tender for supply of Chinese COVID-tests. “I want the tender to be immediately cancelled,” said Czech Prime Minister Andrej Babiš, adding that Tardigrad International Consulting, which won tender for the supply of COVID-19 tests for Czech schools, is not transparent and that the whole tender is “weird”. The government will discuss testing capacities and providers on Monday. Read more

Capital tests show high infection rates. According to Telex sources, testing in the capital have revealed high infection rates, 1.78%, up from December’s 0.62% during a similar wave of free tests. Meanwhile, the coronavirus situation appears to be worsening in Hungary. The three-day moving average of new infections rose from 1,289 daily diagnoses on 16 February to 2,980 on Saturday. The country’s chief medical officer, Cecilia Müller, said on Sunday she fears the exponential increase in new cases. (Vlagyiszlav Makszimov | EURACTIV.com with Telex)

Slovenian government launches crusade against foreign media.  There is no censorship or government attacks against journalists in Slovenia; on the contrary, the country is dominated by “anti-government” media owned by the tycoons and controlled by the left, the Slovenian government said after a request to correct an article published in the Munich daily Süddeutsche Zeitung. Read more.

Bulgaria rolls out mass vaccination programme. With a brief order, Bulgarian Prime Minister Boyko Borissov on Friday destroyed the long-considered five-phase state vaccination plan by setting up a green corridor for anyone wishing to get the vaccine when people from the pre-set priority groups remain hesitant about it, which immediately created huge queues of people in front of hospitals to get the AstraZeneca jab. Read more.

Romania becomes first NATO ally to get HIMARS missile system. The HIMARS system’s first sets of equipment arrived in Romania on Saturday and will be deployed in a military base in Eastern Romania’s city of Focsani, eastern Romania.

Two years ago, Romania signed a contract with Lockheed Martin for three long-range missile systems, worth around $1.5 billion. HIMARS is a battle-tested, superior surface-to-surface missile system and an important piece in Romania’s defence modernisation programme. Romania is the first EU country and the first NATO ally to get the system. (Bogdan Neagu | EURACTIV.ro)

Twelve candidates announce run for Zagreb mayorship. As of Sunday, 12 candidates announced they will be running for the post of Zagreb mayor in May’s local elections, but none of them has the support needed to defeat incumbent Milan Bandić, who has ruled the capital for 20 years. Despite being linked to many dubious business transactions and several legal proceedings, he continues to have strong support, particularly from the poor suburban regions. Read more.

State Secretary Blinken: We will cooperate. US Secretary of State Antony J. Blinken sent a short letter to BiH’s Deputy Chair of the Council of Ministers and to Foreign Minister Bisera Turkovic, saying he is looking forward to cooperating with her, N1 reported.

“We are facing many crises around the world and I am convinced that together we can rise up to face these historic challenges. Now more than ever, our citizens depend on our leadership,” the letter writes. By comparison, High Representative Valentin Inzko recently said that “there are 200 problems in the world, but still BiH is in the top five or six priorities,” adding that “European security begins in the Balkans.” (Željko Trkanjec | EURACTIV.hr)

Kurti discusses government formation, priorities after pandemic. Albin Kurti, leader of the Vetëvendosje party that won the Kosovo elections on 14 February, was interviewed by EURACTIV’s partner Jutarnji list. Among other things, he said that negotiations to form a government will only be held with non-Serb minorities, as representatives of the Serbian List act as an instrument of Belgrade. Read more.