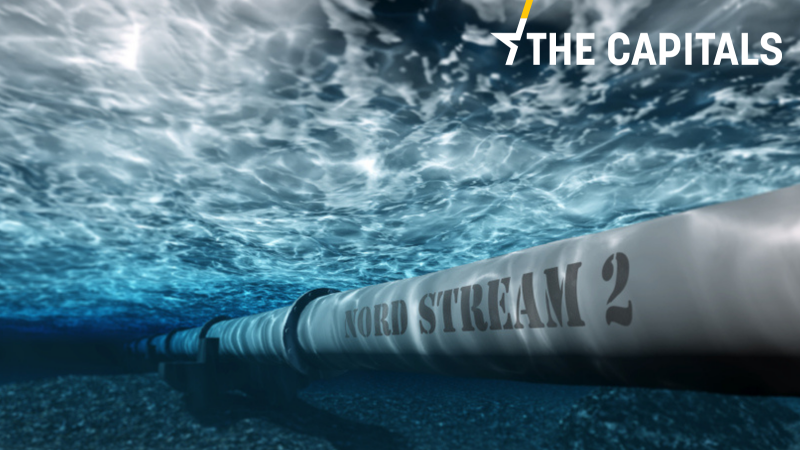 The controversial pipeline project has already cost Europe too expensive, and the stakes for the EU's security, credibility and independence are growing year by year, Polish Prime Minister Mateusz Morawiecki said [Ksanawo/Shutterstock]

Before you start reading today’s edition of the Capitals, feel free to have a look at the article “EU-China summit to weigh geopolitics and trade as tensions mount” by Alexandra Brzozowski.

The controversial Nord Stream 2 pipeline project has already cost Europe too much, and the stakes for the EU’s security, credibility and independence are growing year by year, Polish Prime Minister Mateusz Morawiecki said on Sunday (13 September), appealing to Germany to abandon it. Read more here.

Commission does not know where Hagia Sophia is. Syriza MEPs have sent a letter of complaint to EU Commission chief Ursula Von der Leyen and EU Parliament President David Sassoli after the executive’s services said in an official written reply that Istanbul’s Hagia Sophia church is… in Cyprus.

The MEPs said it was unacceptable that the Commission is unaware where one of the most important symbols of Christian heritage is. Read what happened here.

CDU secures clear win in North Rhine-Westphalia. The Christian Democratic Union (CDU) emerged as the clear winner in North-Rhine Westphalia with 36.2% of the votes in the  elections for mayors and the regional parliament held on Sunday (13 September). Yet, even though state leader and candidate for CDU leader, Armin Laschet, was not on the ballot, the vote is being viewed as an indicator of his viability as Angela Merkel’s potential successor. Read more.

In other news, German Development Minister Gerd Müller (CSU) announced that he will be stepping back from politics and will not run for the Bundestag in 2021. “After 32 years of responsibility in the European Parliament and the German Bundestag, I would now like to initiate a generational change,” he said in a speech in his district. (Sarah Lawton | EURACTIV.de)

The Yellow Vests are back. Around 8,500 people, including 2,500 in Paris, demonstrated on Saturday (12 September) in several cities for the first time since the start of the pandemic, according to France’s interior ministry. Though the ‘Yellow Vest’ movement gathered fewer people this time around, the protests respected COVID-19 measures, as well as bans on demonstrating in several places. French Interior Minister Gérald Darmanin said that there had been “about 300 arrests” across the country. (Anne Damiani, EURACTIV.FR)

Kurz confirms Austria is ‘experiencing’ a second wave. “What we are experiencing now is the start of the second wave,” Austrian Prime Minister Sebastian Kurz told a press conference on Sunday, adding that “soon, we will have reached one thousand new infections a day.” While Austria registered more than 850 new infections between Friday and Saturday, the past few weeks had seen a surge in new COVID-19 cases.

Wearing facemasks will become mandatory in the entire country for most public spaces, such as schools and museums. (Philipp Grüll | EURACTIV.de)

Immigration jeopardises government unity. There is a link between increased migration and spiralling gang violence in Swedish cities, Prime Minister Stefan Löfven told party leaders during a debate and then on Swedish Television on Wednesday (9 September). Careful not to make connections between religious faith, skin colour and criminal activities the prime minister said the country has failed to integrate newcomers to society. EURACTIV’s Pekka Vänttinen looks into what these words could mean for the two parties in Sweden’s minority government, the Social Democrats and the Greens.

Irish accuse Johnson of ‘spin.’ The UK government’s premise that as part of the Withdrawal Agreement the EU would blockade goods between Great Britain and Northern Ireland has been described as ‘spin’ by Foreign Minister Simon Coveney. Read more here.

“The return to school is always an emotional moment. I send my best wishes to everyone involved, from teachers to students to the school personnel, Prime Minister Giuseppe told students and teachers. Find out more here.

Health system braces for second wave. The number of COVID-19 hospital admissions has been increasing over recent weeks in Spain and now account for 7.5% of all patients, compared to 4% just 20 days ago, Dr. Antonio Román, a director at the Hospital Vall d’Hebron in Barcelona, told EFE. Measuring ICU occupancy is the best way to analyse the health risk of the pandemic, says Dr Román, and the latest data from the health ministry shows that there are currently 8,658 COVID-19 patients in hospitals across the country, 1,181 of which are in ICU, EFE reported.

The Spanish health ministry confirms that, despite the rise in cases, the number of positive tests is slowing and the fatality rate remains low, contrary to the patterns observed between March and May. But Dr. Marc San, who works at the Hospital de la Princesa in the Spanish capital Madrid, has a less optimistic take on the situation. Read more about it here.

PM announces major defence and economy initiatives. Greece will adopt two major policy initiatives for the coming months and years, one on defence and another on the economy, Prime Minister Kyriakos Mitsotakis has announced. Read up on the details here.

In other news, Turkey seems to taking steps to de-escalate the tensions in the Aegean sea and East Mediterranean, as a research vessel returned to base. Athens hailed the return but insisted that all military ships should return to normal duties. “Only the epilogue of provocation can become the prologue of talks”, the Greek prime minister noted. (Theodore Karaoulanis | EURACTIV.gr)

Orbán’s ‘war plan’. The government of Prime Minister Viktor Orban is planning to put a “war plan” in place to protect the lives of citizens while ensuring the continued functioning of the country, Orbán told a public broadcaster in an interview on Saturday (12 September). “We do not want to introduce a curfew; we do not want movement restrictions. We want everything to happen as it normally should,” he added. Read more.

Hungary says it will be only EU country to send minister to the Israel-UAE accord signing. Hungarian Foreign Minister Péter Szijjártó will be the only EU diplomatic leader to attend the signing ceremony on Tuesday in Washington for the Israel-United Arab Emirates peace deal, his spokesman said on Sunday (13 September). Read more.

Second wave. The Czech Republic is experiencing a second wave of the coronavirus pandemic, confirmed Roman Prymula, former chief of Central Crisis Staff who is currently responsible for science and medical research, during an interview for Czech Television. Prymula warned that the number of people hospitalised with COVID-19 would increase in the upcoming weeks and hospital capacities could be exceeded.

Despite these warnings, Czech Prime Minister Andrej Babiš claims that the Czech Republic is still among the best countries when it comes to managing the COVID-19 health crisis, particularly as the number of coronavirus-related deaths – which is currently at 456 since the start of the pandemic – remains very low. (Aneta Zachová | EURACTIV.cz)

School starts. Monday (14 September) will mark the first day of school in which students are allowed in the classrooms after six months. Most schools in Romania will await their students for ”face to face” classes, while a few will only provide online courses and some others will implement a ”hybrid” system, with pupils rotating in classrooms.

Meanwhile, Romania recorded more than 103,495 infections and more than 4,163 related deaths on Sunday (13 September), according to data announced Sunday by health authorities. The country recorded 1,109 new coronavirus cases and 36 more deaths on Sunday, with the number of severe cases staying above 450.( Bogdan Neagu | EURACTIV.ro)

Bulgaria’s state institutions are blackmailing businesses. Bulgaria’s state institutions are used for blackmailing and taking over businesses and law enforcement agencies are used to intimidate to ensure political obedience, the Bulgarian Industrial Capital Association (BICA) warned last week. The employers’ organisation which represents three-quarters of the country’s economy with over 10,000 companies employing nearly 500,000 people also said that these new “ominous practices” move Bulgaria away from other countries in transition in the EU, noting that “the sense of lack of rule of law and security of private property is growing.”

Meanwhile, “foreign investors remain concerned about rule of law in Bulgaria,” according to the Investment Climate Statements published by the US Department of State in its annual report. “Corruption is endemic, particularly on large infrastructure projects and in the energy sector. Investors cite other problems impeding investment, such as unpredictability due to frequent regulatory and legislative changes and a slow judicial system,” the document wrote.(Krassen Nikolov | EURACTIV.bg)

Serbia and Israel affirm friendship following talks with Netanyahu. Talks between Serbian President Aleksandar Vucic and Israeli Prime Minister Benjamin Netanyahu  on 11 September were an affirmation between the two countries, Vucic has said.

“An excellent phone conversation with PM Benjamin Netanyahu. The friendship between the Serb and Jewish peoples, Serbia and Israel, was affirmed. Possibly a visit to Jerusalem and building cooperation at all levels soon,” Vucic posted on Instagram. Read more.

In other news, the US Department of State declared yesterday (13 September) that the US welcomes Serbia’s announcements declaring Hezbollah as a terrorist organisation. EURACTIV Serbia has more.