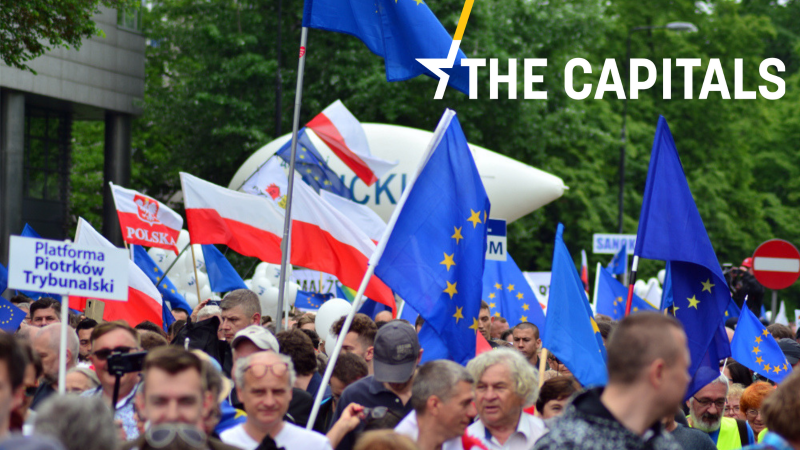 The European Coalition, a newly established pro-European bloc designed to take on the ruling conservative Law and Justice (PiS/ECR) party, could collapse after its defeat in the EU elections.

PiS won 45.4% of the vote while the European Coalition comprising the Civic Platform (PO), formerly led by European Council President Donald Tusk, and a group of leftist and rural parties, reached 38,5%.

The Polish People’s Party (PSL/EPP) will meet on Saturday to discuss whether to withdraw from the Coalition and is likely to do so, despite obtaining three seats in the next European Parliament. What worries the PSL leaders is that by aligning with more progressive forces within the Coalition, they may lose more conservative voters to PiS.

The socialist Democratic Left Alliance (SLD/S&D), which got five seats, does not want to withdraw from the bloc, while the Civic Platform (PO/EPP), the Coalition’s largest party, is now pondering its strategy, as the position of its leader, Grzegorz Schetyna, has been weakened.

After the poll, Schetyna said that forming a pro-EU coalition was a success in itself and that the next goal should be the 2019 Polish parliamentary election. (EURACTIV.pl)

Eurojust looks for funds. In an interview with EURACTIV’s partner EFE, the president of Eurojust, Ladislav Hamran, said justice in many EU countries “does not have sufficient economic resources”.

Hamran, who has prioritised terrorism, illegal immigration and cybercrime, added that investing in the police but neglecting the judiciary “can create a bottleneck that would represent an important risk for the EU”. (EuroEFE.EURACTIV.es)

‘Dummy’ candidates. Flemish extreme-right Vlaams Belang has come under fire for replacing women who won seats in elections with male candidates lower down the party list. This involves Patsy Vatlet for the EU Parliament and Lut Deforche-Degroote for the Flemish Parliament, who came second but due to the so-called ‘zipper principle’, according to which on a party list headed by a man, the second place must go to a woman. (Alexandra Brzozowski, EURACTIV.com)

CSU heavyweight to retire. German Interior Minister Horst Seehofer, who made headlines last June over his intense disagreements with Chancellor Angela Merkel on immigration, will retire from politics after the next federal election in 2021, EURACTIV media partner Deutsche Welle reported on Thursday (30 May). (Claire Stam, EURACTIV.de)

Di Maio is safe. Five Star Movement supporters confirmed Luigi Di Maio as their political leader through the party’s e-voting platform Rousseau. Italy’s deputy PM decided to put his leadership in the hands of party’s voters after the anti-establishment party fell to 17% of the vote in the European elections, one year after scoring 33% in national polls.

Farage and Orbán say no to Salvini. The Brexit Party is not joining the nationalist ENF EU Parliament group led by Lega’s Matteo Salvini, at least for now. Party leader Nigel Farage will consider an ENF offer only if his current EFDD group does not manage to find one last delegation needed to maintain its group in the Parliament. >>See also: Salvini and Berlusconi to fight for Orban’s eyes

The chief of staff to Hungarian Prime Minister Viktor Orbán’s said he didn’t see much chance of teaming up with Salvini in the next Parliament, Reuters reported. (Gerardo Fortuna, EURACTIV.com)

Le Pen’s red lines. Allowing the Slovak neo-fascist LSNS group to join the Movement for a Europe of Nations and Freedom (MENF) group in the European Parliament “would go very much against Marine Le Pen’s strategy to give the impression that she is the respectable right, but true right”, professor Christian Lequesne from Sciences Po told EURACTIV Slovakia in an interview.

“She will be very cautious when it comes to doing business with parties who clearly are anti-Semitic, deny Holocaust etc. It is also what she did on the national level, to differentiate from her father.” (Zuzana Gabrižová, EURACTIV.sk)

Unfortunate gunshot. Czech PM Andrej Babiš told Blesk.cz he would not demand the replacement of the bodyguard who mistakenly fired his gun aboard a plane flying Babis and other delegates from Tuesday’s Brussels informal summit. The incident occurred at the Brussels Airport and none of 22 passengers was harmed. (Ondřej Plevák, EURACTIV.cz)

Playing with fire. WWF Hellas has said in a report Greece’s forest fire protection system still faces dangerous shortfalls, despite last year’s tragedy, which cost 102 lives. WWF said there was no prevention planning on the local authority level in place, adding that the central government does not prioritise prevention and fails to review and update fire risks.

Judicial control. A row has broken out after Justice minister Michalis Kalogirou invited conservative opposition New Democracy to seek a consensus on the appointment of chief justices in Greece’s top courts but it refused. “The masks have fallen,” Kalogirou said. The Tsipras government wants to replace several justices in the Supreme Court, whose term ends at the end of June. New Democracy says considering that snap elections will take place on 7 July the judges should not be replaced by the current leftist government.

(Read more on EURACTIV’s partner ANA-MPA: Kalogirou: ND does not want consensus, sees justice as a ‘tool’ of government)

>>Read more: Commission: Turkey has continued to move away from the EU

High-profile resignation. Two months after the apartment scandal was revealed, according to which several high-ranking politicians of the ruling party GERB (EPP) had bought real estate at suspiciously low prices, Tsvetan Tsvetanov resigned from all leadership posts in the party.

Tsvetanov was the number two in the party and has also served as interior minister. The announcement came after GERB won the European elections.

In March, Bulgaria’s anti-corruption commission announced that it was investigating Tsvetanov, along with other politicians, in connection with the property deals. Tsvetanov, who denies wrongdoing, resigned as leader of GERB’s parliamentary group and as member of the parliament. (Dnevnik.bg)

ALDE leaves ALDE. Romania’s liberal ALDE party has left the namesake European family after it quarrelled with its leader, Guy Verhofstadt. The ALDE group in the EU parliament has excluded representatives of the Romanian party, and a similar decision was expected at a party congress in June, Verhofstadt recently.

Moreover, last week in Bucharest, the ALDE leader attended an electoral rally of the Alliance 2020 USR PLUS of former EU Commissioner Dacian Cioloş, which has become part of the revamped ALDE/Renaissance/USR PLUS group.

Consultations after the referendum. President Klaus Iohannis has called parliamentary parties for consultations next week to discuss how to change legislation to include the results of a referendum held last Sunday. Romanian people overwhelmingly voted to stop the government from granting pardons or amnesty to graft-related convictions and from altering judicial legislation via emergency decrees. (EURACTIV.ro)

PM got good news. Struggling to find an explanation for the bad EU elections’ result while trying to preserve his party leadership, Prime Minister Andrej Plenković finally got some good news: He will be negotiating on behalf of the EPP in EU leadership talks, which proves that his reputation in Brussels is higher than in Croatia.

Higher GDP. The Bureau of Statistics published the GDP for the first quarter, which showed growth of 3.9% year-on-year, considerably higher than expected and among the highest in the EU. (Tea Trubić, EURACTIV.hr)

Kosovo police operation. KFOR spokesman Vincenzo Grasso has said that everyone had been informed about the operation in Kosovo because newspapers in Serbia had previously published reports that the Kosovo police were planning to arrest 26 police officers. He also said that during the entire operation KFOR had had good communication “with all relevant local and international institutions, including the Serbian Armed Forces.”Serbian President Aleksandar Vučić denied the KFOR spokesman’s statement.

EC report Is Interesting. Prime Minister Ana Brnabić has said that the EU Commission report on Serbia is basically positive, but that in some parts it made “political” remarks. She waved off the assessment that Serbia had not made any progress in the areas of media, freedom of expression and cooperation with civil society.

“In some areas, the report is more interesting than usual. In some important areas, political remarks were made. Overall the report is positive, but there are things that are unclear and have no logic,” Brnabić said.  (Beta-EURACTIV.rs)