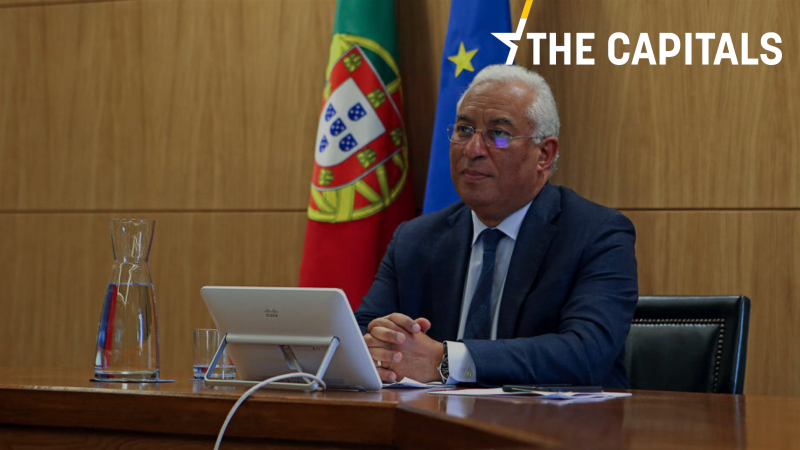 The PM also said that Europe would have to “reinvent” its productive organisation to ensure a shorter, closer and safer supply chain.  [EPA/ ANTONIO PEDRO SANTOS]

Before you start reading today’s edition of the Capitals, feel free to have a look at the article “Stakeholders call for ‘reality check’ on EU road transport and energy policy” by Sarantis Michalopoulos.

LISBON. Comments made by Dutch Finance Minister Wopke Hoekstra, who had called for an investigation into Spain’s proclaimed lack of budgetary capacity to cope with the COVID-19 pandemic, were heavily criticised by Portuguese Prime Minister António Costa, who described them as “repugnant” and contrary to the spirit of the European Union.

The PM also said Europe would have to “reinvent” its productive organisation to ensure a shorter, closer and safer supply chain. As an example, Costa pointed to the arrival in Portugal on Friday (27 March) of four million masks and hundreds of thousands of personal protective equipment manufactured in China on a flight by Ethiopian Airlines.

Meanwhile, in an unprecedented move, the government has decided to temporarily grant citizenship rights to all migrants and asylum seekers in order to ensure that they will have access to social security and healthcare amid the coronavirus pandemic.

As Portugal reports 5,962 confirmed COVID-19 cases with 119 deaths as of Sunday (29 March), and health authorities predicted the pandemic to peak by late May, a 14-year-old boy with prior health conditions died from COVID-19, the Portuguese health minister said on Sunday. (Lusa.pt)

Italy-EU relations hit a new low. The anti-EU sentiment in Italy mounted over the weekend after the interview of European Commission president Ursula von der Leyen with German news agency DPA. The Commission president dismissed the idea of coronabond as “just a popular word right now,” adding that concerns from Northern countries are justified.

Economy minister Roberto Gualtieri immediately condemned the “wrong words” of von der Leyen, who later clarified that the Commission is not excluding any option within the limits of the Treaty. Gerardo Fortuna has more.

German government united behind continued measures. While there were 52,547  confirmed COVID-19 cases as of Sunday evening (29 March), according to the Robert Koch Institute, head of the chancellery, Helga Braun, announced that the government would not consider any relaxation or removal of restrictions before 20 April. While Chancellor Angela Merkel (CDU) requested patience in a podcast released by the government, Finance Minister Olaf Scholz (SPD) warned against weighing economic interests against saving lives. Labour Minister Hubertus Heil (SPD) told the newspaper Handelsblatt that “life and health must have priority, in case of doubt, also over understandable economic interests.”

To read the latest updates by EURACTIV Germany concerning COVID-19 in Germany, read on here.

Also, over the weekend, the head of Germany’s research agency for infectious diseases warned that the healthcare system could be overrun. Lothar Wieler, president of the Robert Koch Institute, warned in the Frankfurter Allgemeine Sonntagszeitung that the country does not have sufficient capacity in its healthcare system to handle the impending wave of COVID-19 patients. EURACTIV Germany’s Sarah Lawton reports.

Coronavirus crisis puts EU credibility on the line. How the European Union responds to the coronavirus outbreak will determine its future credibility, France’s European affairs minister said on Sunday (29 March), after the bloc failed to agree last week on measures to cushion the economic blow. Read more.

Back to work soon? Belgian minister Philippe De Backer (Open VLD), who heads the task force for the management and supply of COVID-19 equipment, has proposed to increase testing to determine who may be immune to the coronavirus and able to go back to work as soon as the peak has been reached. EURACTIV’s Alexandra Brzozowski has more.

Government flies in Romanian caseworkers. Romanians who commute to Austria for work daily or weekly and constitute almost half of the country’s 24-hour care workers have not been able to enter Austria since Hungary closed down its borders without exception for Western-bound workers. In response, the local government of Lower Austria organised air transport by ensuring two planes, which were originally intended to bring Austrian citizens home, will fly at noon on Monday (30 March) from Romania to Vienna with care workers filling the empty seats.

To cater to the needs of its rapidly ageing population, Austria relies heavily on workers from other EU member states, so the current border shutdown has had many Austrian patients worried they would not receive care. (Philipp Grüll | EURACTIV.de)

ICU units nearly at capacity. Intensive care units across Ireland could be at full capacity within days, according to Taoiseach Leo Varadkar, as the Republic registered 2,615 confirmed COVID-19 cases with 36 deaths as of Sunday (29 March). The PM also said over the weekend that he would be surprised, judging by the figures, if the death rate in the country stayed below 1,000 people.

Meanwhile, the first supply of medical equipment from China landed in Ireland on Sunday. The Irish government has agreed on a €208 million deal with the Chinese for the provision of such equipment, which will be transported to the country on 10 Aer Lingus flights.

Read about the COVID-19 crisis in Ireland, by clicking here.

To stay in the loop on COVID-19 matters in Spain, have a look here.

While the head of Spain’s public health emergency department, Fernando Simón, had said that intensive care units (ICUs) in six regions were already at maximum capacity and that three other regions were rapidly approaching their limit, 14,709 people had recovered from COVID-19 in Spain, meaning the recovery rate currently sits at around 18.7%. Overnight (from Saturday to Sunday), 332 people had been admitted to ICU, bringing the total number of patients in units across the country to almost 5,000, Simón stressed. Read more.

Albania sends doctors to Italy. Albania, one of Europe’s poorest countries, has sent a team of 30 doctors and nurses to neighbouring Italy to help tackle the new coronavirus pandemic. “Rich countries have turned their backs on others. We are not rich but we don’t forget,” Albanian PM Edi Rama said.

Lockdown extension. The government has decided to extend the lockdown after 6 April. According to the news website in.gr, the government will announce today the compulsory confinement at home until after Easter on 19 April this year. Greek policymakers fear that during Easter, Greeks may decide to go to the countryside and gather in churches, which would result in spreading the virus across the country. (Sarantis Michalopoulos)

Vote by mail included in country’s ‘anticrisis’ measures. As Poland reported 1,862 COVID-19 cases (224 on Sunday) and 22 deaths as of Sunday (29 March), the lower chamber of parliament, known as the Sejm, approved the anticrisis measures that are supposed to help entrepreneurs. Yet, during the evening vote, the ruling conservative Law and Justice (PiS) party included an amendment which allows people in quarantine to vote by mail. Read more.

Rescue package worth €1 billion in the making. Over the weekend, Slovakia’s coalition parties had agreed on the first rescue package for firms and self-employed people struggling with the COVID-19 crisis. The package will unlock up to €1 billion per month, which is approximately 1% of the country’s annual economic output. EURACTIV Slovakia’s Zuzana Gabrižová has more.

And to find out more about how Slovakia is handling the crisis, click here.

Jourová on Hungary. European Commission Vice-President for Values and Transparency Věra Jourová commented on the Hungarian government’s efforts to indefinitely rule by decree and bypass parliamentary scrutiny due to the coronavirus crisis on Saturday Saturday (28 March).

“The European Commission supports national governments’ efforts to protect their citizens, but we follow the situation regarding European law as well. Back to Hungary, the bill wasn’t accepted yet. When it is, we will analyse it and compare it with emergency measures in other countries,” she said in an interview with daily Deník. (Ondřej Plevák | EURACTIV.cz)

Tightening the measures. As Bulgaria reported a total of 346 confirmed coronavirus cases and eight deaths as of Sunday (29 March) with the average age of patients being 66, the head of the national COVID-19 task force, Ventsislav Moutafchiiski, had said that it was a matter of time before Bulgarians leave their homes only if they have a proper declaration. EURACTIV Bulgaria’s Krassen Nikolov has the story.

Romania caps utility, fuel prices. As Romania registered 1,815 COVID-19 infections and 43 deaths by Sunday evening (29 March), the Romanian authorities banned the price increases for electricity, heating and water services, natural gas and fuels until the end of the state of emergency. While the prices had been capped at the levels valid on Sunday, price decreases are still possible, Internal Affairs Minister Marcel Vela has said. (EURACTIV.ro)

To stay abreast about the situation in Romania, read more here.

EU-funded medical equipment lands in Serbia. On Sunday (29 March), a cargo Boeing 747 landed at Belgrade Airport from Kerala, India, with 90 tonnes of medical protective equipment bought by Serbia to combat COVID-19. After the first plane with medical aid, which came from China, landed on Thursday evening (26 March), this flight was fully funded by the EU as part of a €93 million package for Serbia announced by the EU, which provides immediate as well as short and medium-term assistance to help Serbia fight COVID-19, the Delegation of the EU to Serbia announced.

Meanwhile, Serbia will receive a portion of the $274 million set aside for urgent medical needs of US states for which Serbia had already forwarded a list of much-needed supplies, the US ambassador to Serbia, said on Friday (27 March). EURACTIV Serbia takes a closer look.

In other news, Defence Minister Aleksandar Vulin and Chinese Ambassador to Serbia Chen Bo laid wreaths at the memorial plaque on Friday (27 March) for the three Chinese journalists killed outside the former Chinese embassy building in Belgrade, which had been bombed on 7 May 1999 during NATO’s bombing campaign. Saying that the Chinese people stood by Serbia in the hardest moments during the NATO aggression, Vulin noted that the Serbian and Chinese peoples were together again and fighting “an invisible enemy”.

Chen Bo said that the history of relations between the two countries showed that Serbia and China had a friendship as strong as steel, which he said meant sharing the good and the bad, the Ministry of Defence reported. (EURACTIV.rs  betabriefing.com)