Portugal to approve first surplus budget since return to democracy 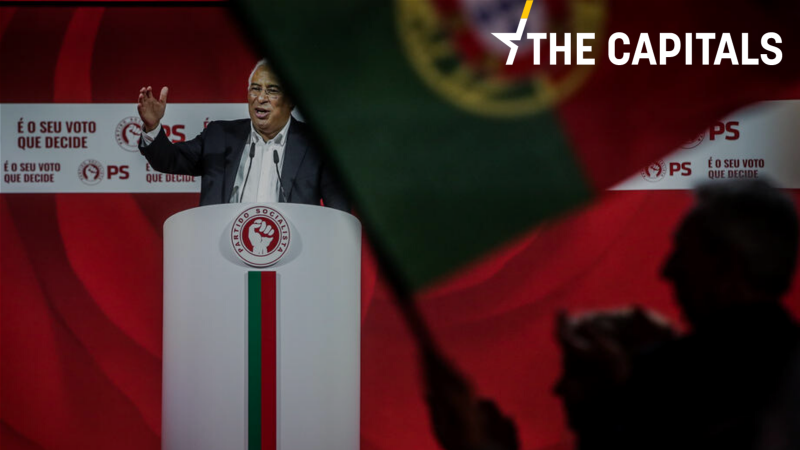 For the first time since the country's return to democracy in 1974, the Portuguese parliament will have the chance to approve a state budget with a surplus today (10 January). [EPA/ CHRISTIAN HARTMANN]

Before you start reading today’s edition of the Capitals, we would like to introduce you to our brand-new Global Europe Brief, a weekly update on what’s happening in the world of EU foreign affairs and defence. You can subscribe to it here.

We also invite you to read Vlagyiszliv Makszimov’s Europe must go beyond empty words on Iran, experts say.

LISBON. For the first time since the country’s return to democracy in 1974, the Portuguese parliament will have the chance to approve a state budget with a surplus today (10 January).

Although it has only 108 MPs in the 230-seat parliament, the socialist government is counting on the announced abstentions of other left-wing parties and the People-Animals-Nature Party (PAN) to push through the budget proposal in the first of three votes.

After four years of governing with the left – the Portuguese Communist Party (PCP), the Left Bloc (BE) and the Ecologist Party The Greens (ENP) – the government headed by Prime Minister António Costa was forced to negotiate with former parliamentary partners to ensure the viability of the budget proposal.

For now, although very critical of the government’s proposal and particularly its planned 0.2% budget surplus, the left, Greens and PAN say they will abstain in today’s vote, calling on the socialists to step up their game during the discussion phase of the budget. Meanwhile, Portugal’s conservative and far-right parties (PSD (centre-right), the CDS, the Liberal Initiative (right) and Chega (extreme-right)) criticised the budget proposal, saying it would increase the tax burden.

Read the full article of José Pedro Santos from Lusa.pt (in English and Portuguese)

French corruption criticised by the Council of Europe. “Grey areas” in the fight against corruption persist in France, the Council of Europe’s Group of States against Corruption (Greco) warned on Thursday (8 January), calling on the government to increase transparency around the presidency and give more power and money to the newly created national financial prosecutor office.

AfD fined for accepting illegal campaign donations. The far-right Alternative for Germany party (AfD) could pay a total of almost €270,000 for accepting illegal campaign donations, a Berlin administrative court ruled on Thursday evening (9 January). It was found that a Swiss PR agency provided free campaign advertising to party chair Jörg Meuthen for his election campaign in the 2016 state parliament elections in Baden-Württemberg. The value of the services totalled 90,000 euros. Although it didn’t convince the court, Meuthen pointed to his inexperience, as well as his belief that the managing director of the agency, who was one of his acquaintances, had simply made some posters.

But was this the first time the far-right party faced the courts for accepting illegal campaign donations? Elsewhere Chancellor Angela Merkel is heading to Moscow to meet Vladimir Putin.

End of the exchange. Academics reacted angrily after MPs confirmed that the UK will not seek to retain access to the Erasmus student-exchange programme after it leaves the EU on 31 January.

As they finalised the Brexit Withdrawal Agreement Bill on Thursday (9 January) that is expected to pass into law next week, MPs rejected a clause would have required the government to seek to negotiate continuing full membership of Erasmus in the post-Brexit partnership talks with the EU. “Choosing to limit the future of young people; choosing to rob them of opportunities is one of the worst outcomes of Brexit,” tweeted Northumbria university Professor Tanja Bueltmann. (Benjamin Fox, EURACTIV.com)

Leaked note. 229 days into the Belgian government coalition negotiations, informers Georges-Louis Bouchez (MR) and Joachim Coens (CD&V) are dealing with the fallout from the leak of the 20-page-strong confidential note of the talks’ progress between the 10 parties. The leaks revealed that left-leaning policies, such as a minimum pension of €1,500 and the closing of old nuclear power stations, had been removed, which was greeted with some concern among progressives. On Monday, the informants are due to deliver their final report to the King. (Alexandra Brzozowski | EURACTIV.com)

Modernising air defence. By 26 February the skies over Finland will be occupied by the crème de la crème of fighter planes. The country has decided to modernise its air defence capability and replace its long-serving sixty-four Hornets with a new generation fighter.

EURACTIV’s Pekka Vanttinen has the lowdown on the new hardware.

More on a possible date for the elections, courtesy of EURACTIV’s Samuel Stolton.

Jailed Catalan MEP barred from sitting in Strasbourg hemicycle. Spain’s Supreme Court has refused to release jailed Catalan MEP Oriol Junqueras, meaning he will be unable to sit at the European Parliament session next week. The decision, which will be “taken note of” according to a Parliament source, is at odds with the EU Court of Justice recognising his rights to immunity as an elected MEP. (Beatriz Rios | EURACTIV.com)

5G is not just a technology issue. Greece will wait for the relevant European Commission report before making its decisions on technology issues in the development of 5G networks, Digital Minister Kyriakos Pierrakakis told EURACTIV Greece. And that’s because the issue of 5G is not purely a technological one. “It is also a matter of national security and protection of the country’s critical infrastructure,” he noted.

No country for researchers. In a scathing article for the Corriere della Sera daily, an Italian university professor attacked the the European Research Council (ERC) grants, the main EU funding programme supporting excellence and frontier research. The opinion has sparked controversy among researchers, fuelling an intense debate over the current poor state of research funding in Italy. Gerardo Fortuna reports.

Lajčák rumoured to become EU envoy for Western Balkans. According to rumours, Slovak outgoing foreign minister and career diplomat Miroslav Lajčák is a candidate to become the first EU special envoy for the Western Balkans, a post which would have to be set up by the European Commission in coordination with the European External Action Service (EEAS). As a two-term-foreign-minister, Lajčák served as special representative of the EU in Bosnia and Herzegovina between 2006-2009 and briefly worked in the hierarchy of the EEAS. (Zuzana Gabrižová | EURACTIV.sk)

Orbán will leave the EPP if it doesn’t change. “We are interested in the future EPP” but will leave the political family if it “is unable to change,” Prime Minister Viktor Orbán told an international press conference.

EU Commission wants agriculture subsidies back. Based on an audit conducted in 2017, the European Commission wants the Czech Republic to pay back €46 million worth of agricultural subsidies because farmers had not been obtaining their dues after the ‘active farmer’ concept had been introduced, server iROZHLAS.cz reported.

The country’s agriculture ministry did not agree with the decision or the final sum and has announced it would request a conciliation procedure. (Ondřej Plevák | EURACTIV.cz)

Out of Iraq? With events in Iraq following the US strike that killed Iranian top general Soleimani prompting calls for ‘restraint and de-escalation’, Poland appears undecided on whether to withdraw its troops from the country.

Youth unemployment rates recorded in Czechia (5.2%), Germany (5.9%) and Bulgaria (7.0%) were the lowest across Europe for the month of November, according to Eurostat. (Dnevnik.bg)

A small, yet resilient nation. “I want us to respect diversity, to be unique in diversity, a small but a resilient, powerful and serene nation and in that way, breath by breath, smile by smile, event by event, slowly but constantly going towards better results and towards greater satisfaction for the people who live in Croatia,” elected president Zoran Milanović (S&D) said in a Facebook post. (Željko Trkanjec | EURACTIV.hr)

95 UN members do not recognise Kosovo. Serbian Foreign Minister Ivica Dačić said on Thursday (9 Thursday) that with 95 states not recognising Kosovo and five remaining “fluid”, meaning only 93 states recognise it as a state, any UN General Assembly decision on the matter would fail. (EURACTIV.rs)

Dismantling the largest human trafficking ring. Montenegrin police announced that they had, with the help of Interpol and Europol, cracked down on the largest human trafficking ring to have operated in the Balkans. The police arrested eight people suspected of organising a criminal group that held more than 90 Taiwanese citizens in slavery in Montenegro for cyber-fraud. (Željko Trkanjec | EURACTIV.hr)

Dodik again on RS-Serbia integration. Milorad Dodik, a Serbian member of BiH’s presidency, said the future of BiH’s Serb entity of Republika Srpska (RS) was in “integration with Serbia” and that nothing would stop this process.