Portugal’s EU Presidency to focus on relations with India 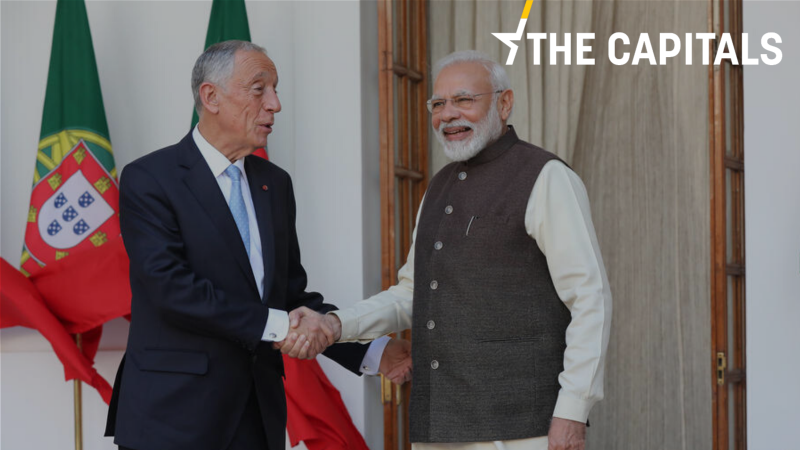 Marcelo Rebelo de Sousa described the free trade agreement with India, which is under negotiation, as strategically very important for the EU and promised that Portugal will fight for it. [EPA/HARISH TYAGI]

Before you start reading today’s edition of the Capitals, make sure you catch up with EURACTIV’s Alexandra Brzozowski’s reporting from this weekend’s Munich Security Conference with Day 1, Day 2 and Day 3 for an overview of the hot topics discussed.

Also, feel free to have a look at the article “EU plans ‘common data spaces’ to exploit agriculture and health potential” written by Sarantis Michalopoulos.

Relations with India to be key in Portuguese EU presidency. Relations between the EU and India will be the central point of the next Portuguese EU presidency, said Portugal’s president, Marcelo Rebelo de Sousa after meeting the Indian PM Narendra Modi in New Delhi. The president added that an EU-India summit would be held “in a few months” and that relations would be “deepened” during his country’s EU presidency, which begins in the first half of 2021. Read the full story by Lusa.pt’s Inês Lima.

Also, feel free to read more about the relations between the EU and India.

In other news, the Portuguese government is in the final stages of transposing the European anti-money laundering directive, the finance ministry told Lusa on Friday (14 February). Last week, the European Commission urged Portugal and seven other member states to effectively transpose the European legislation on combating money laundering, pointing out that recent scandals make the need for strict rules even more important.  (Alexandra Noronha and André Campos, Lusa.pt)

Steinmeier comes out swinging in Munich. German President Frank-Walter Steinmeier had harsh words for Washington, Moscow, and Beijing, as he accused them of undermining the global order and stoking mistrust during his opening speech at the Security Conference in Munich. Steinmeier not only voiced concerns regarding the return of a ‘great power competition’ that could end in a nuclear conflict, describing “more mistrust, more armament, less security…all the way to a new nuclear arms race”, but also called out each of the parties in turn and reiterated his belief that Germany needs to spend more on European defence.

The surprisingly assertive tone marks what could be a new page in German foreign policy that helps drive a greater European role in international security in view of the strained relationship with the US. (Sarah Lawton | EURACTIV.de)

Government reshuffle after new setback for Macronists. Olivier Véran of Macron’s La République En Marche (LREM) was announced as new health minister on Sunday (16 February) evening, following the decision of Agnes Buzyn to be a candidate for the municipal elections in Paris. EURACTIV France looks into the Paris municipal elections.

Restart, again. 267 days into the Belgian federal government formation, the Belgian King once again needs to restart consultation with all the ten party leaders throughout Monday after coalition informateur Koen Geens (CD&V) resigned on Friday following lack of progress in the talks. (Alexandra Brzozowski | EURACTIV.com)

Kurz supports international digital tax at the Munich Security Conference. On the margins of the Security Conference in Munich, Chancellor Sebastian Kurz told Facebook CEO Mark Zuckerberg that European big tech companies should “contribute their fair share in taxes”. He also pointed out that Austria had already introduced a digital tax and affirmed that he will continue to support a solution at EU level or the OECD.

EURACTIV Germany’s Philipp Grüll looks at what else was discussed.

Finnish Presidency on a shoestring budget. Finland managed to organise its rotating six-month EU Presidency last year on a two-thirds budget, as it only used €55 million of the €81.3 million allocated. Spending on the EU may not be the bottomless pit that its populist critics often refer it to.

As talks on future EU-UK trade and political relations begin in earnest in early March, France’s foreign minister offered the latest rejoinder that the talks will be just as bitter as the Article 50 process. Speaking at the Munich Security conference, Foreign Minister Jean-Yves Le Drian predicted the two sides would “rip each other apart” as they strove for advantage in the negotiations. (Benjamin Fox, EURACTIV)

Irish Commission passports. Up to 60 British officials who work in the European Commission have obtained an Irish passport in order to continue working in Brussels, it has emerged. EURACTIV’s Samuel Stolton has more.

The ruling coalition stays the same. Italy’s PM Giuseppe Conte dismissed speculation over his intention to replace Matteo Renzi’s Italia Viva in the government majority and put together a new ruling coalition. Rumours about a government reshuffle started circulating after a meeting between Conte and the President of Republic Sergio Mattarella on Saturday (15 February). (Gerardo Fortuna | EURACTIV.com)

Slovak president addressed rule of law deficiencies in the V4 in Munich. It is legitimate to think about tying EU funding to the respect of common values when politicians are not held responsible, Slovak President Zuzana Čaputová told the Security Conference in Munich, adding that the EU is a community of values, which directly relies on the will of leaders to protect them.

“We need to realise that, as with the matters of the environment and the rule of law, our actions have repercussions for future generations”, she added. (Zuzana Gabrižová | EURACTIV.sk)

Campaign kick-off. Incumbent President Andrzej Duda inaugurated his presidential campaign. with both prime minister Mateusz Morawiecki and PiS leader Jarosław Kaczyński praising his tenure. The launch lacked specific policy proposals and was organised around general themes of unity and the need for national solidarity. Duda’s rivals – Małgorzata Kidawa-Błońska and Władysław Kosiniak-Kamysz will hold their kick-off rallies in two weeks. In the latest polls, Duda is at 41%, while Kidawa-Błońska at 24%. In a run-off, Duda has a tiny lead over Kidawa-Błońska, Kosiniak-Kamysz and independent candidate Szymon Hołownia. (Łukasz Gadzała | EURACTIV.pl)

Czech Republic middle-of-pack in EU directive transposition. Six EU directives, including the disputed firearms possession directive that should have been adopted by mid-January, had still not been transposed into Czech national law by the end of November 2019, according to a government report. Compared to other EU member states, the Czech Republic had an average transposition rate late last year. Prague managed to reduce its transposition deficit to 0.5% by the end of November 2019. (Ondřej Plevák | EURACTIV.cz)

Tough times for the economy, says Orbán. Hungary will cut taxes on labour and for small firms, Prime Minister Viktor Orbán said on Sunday (16 February) as he warned of difficult times ahead for the country’s economy, Reuters reports.

Shippers worried about Brexit effects. If customs and border controls are introduced in the UK, as a consequence of Brexit, this could easily reduce by 30% the flow and efficiency of cargo traffic, said Peter Pišek, owner of Pišek & HSF Logistics and head of the transport section of Slovenia’s Chamber of Crafts, according to Delo newspaper. (Zoran Radosavljevic | EURACTIV.com)

Russian foreign minister to visit in April. Russian Foreign Minister Sergey Lavrov will be visiting Zagreb at the end of April. In the run-up to his visit, Croatia’s Foreign and European Minister Gordan Grlić-Radman has said Russia is a partner worth talking to and told reporters that “it is in our interest to know what Russia’s positions are. We care about partner relations”. (Željko Trkanjec | EURACTIV.hr)

Serbia and Kosovo sign agreements on Rail Link, Highway. Representatives of Serbia and Kosovo signed agreements which are to result in the restoring of the railway link and the construction of the Belgrade-Priština highway in Munch on 14 February. “This is very important for the Serbs living in Gračanica, Kosovsko Pomoravlje and Sirinićka Župa,” said Serbian President Aleksandar Vučić after the signing, according to his Instagram account. (EURACTIV.rs)

We will look at the new methodology The Montenegrin government will carefully consider implementing the EU’s new enlargement methodology which aims to strengthen ties with countries from the Western Balkans, and decide whether accession negotiations will continue according to existing or new rules, announced Montenegro’s chief negotiator to the EU, Aleksandar Drljević. (Željko Trkanjec | EURACTIV.hr)