Prague and Vienna compete to host a US-Russia summit 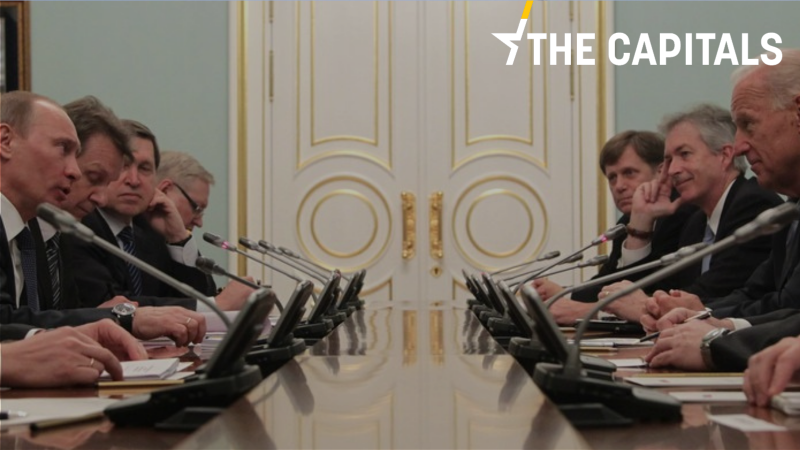 Before you start reading today’s edition of the Capitals, feel free to have a look at the interview EU Commission ‘concerned’ about PKN Orlen media takeover, Jourová says, by Samuel Stolton.

High-level Conference Climate Science from Space: Synergies for a greener innovation economy: With the participation of the European Commissioner Mariya Gabriel and the Portuguese Minister for Science, Manuel Heitor, this conference will help building bridges to link space and climate ecosystems, by showing how space-based systems can improve daily life and contribute to the European Green Deal.

After US President Joe Biden proposed a face-to-face meeting with his Russian counterpart Vladimir Putin so the estranged leaders could tackle a raft of disputes, both Prague and Vienna offered to host a summit between the two nuclear powers. Read more.

In other Czech news, Jan Hamáček – in his new temporary role as foreign minister – will travel to Moscow next week to discuss the supply of the Russian Sputnik V vaccine to Czechia. One of the members of his delegation will be Andrej Danko, a former speaker of the Slovakian parliament, who is being seen in Russia as key in getting the Sputnik jab to Bratislava, EURACTIV.cz’s media partner Aktuálně.cz and weekly Respekt found. (Ondřej Plevák | EURACTIV.cz)

Lisbon, New Delhi expect to restart EU-India talks in May. Portugal has said it hopes to resume negotiations on trade and investment between the EU and India at a summit between EU leaders and India’s Prime Minister Narendra Modi in Porto on 8 May. Read more.

French lockdown improved air quality, avoided thousands of deaths. Several thousand deaths were avoided during the COVID-19 pandemic due to reduced emissions of air pollution particles, according to the French health agency. Read the full story.

In other news, France crossed the 100,000-mark when it comes to COVID-19-related deaths several weeks ago, according to the latest data from the French National Institute for Health and Medical Research (Inserm). The figure takes into account deaths in hospitals, nursing homes and private homes. According to the national health agency Santé publique France, as of Wednesday 99,500 people had died since the start of the pandemic. (Anne Damiani, Magdalena Pistorius| EURACTIV.fr)

Civil service chief orders ‘conflict of interest’ probe over second jobs. Senior officials in the UK civil service have been ordered to declare by the end of this week whether they have rule-breaking second jobs in the wake of a lobbying scandal involving former prime minister David Cameron. Read more.

Ireland launches inquiry into Facebook after reports of data leak. Ireland’s Data Protection Commission (DPC) said on Wednesday it had launched an inquiry into Facebook Inc, after a dataset reportedly containing personal data relating to some 533 million Facebook users worldwide was made public. Read more.

Seasonal workers set to enter Finland this summer amid pandemic. Up to 10,000 people mostly from Ukraine, Russia and Thailand will arrive to work in the Finnish fields and greenhouses this summer despite fears of COVID-19 running high among locals. Read more.

Denmark drops AstraZeneca vaccine for good, in European first. The Danish government announced it would stop using the AstraZeneca COVID-19 vaccine altogether, becoming the first European country to do so over suspected rare but serious side effects. Read more.

Erdogan slams Draghi for calling him a ‘dictator’. “The statements of the Italian prime minister are of total indecency and rudeness”, Turkish President Recep Tayyip Erdogan said on Wednesday. His comments came in response to Draghi’s remark in a press conference last Friday when the Italian PM called Erdogan a “dictator”, according to Turkish news agency Anadolu. Read more.

In other news, an Egyptian witness has accused Egyptian National Security officers of having misled the investigation about the torture and killing of Italian researcher Giulio Regeni in Cairo in January 2016, EURACTIV’s partner, Corriere della Sera, reported. For Regeni’s murder, Italian judges have asked for the trial of four Egyptian intelligence officers. (Daniele Lettig | EURACTIV.it)

Greece makes self-test mandatory for workers. The Greek government has decided to prioritise self-tests in order to re-open its economy, which has been hit hard by the pandemic. A number of workers will be obliged to conduct this test as a condition to work. Read more.

Poland still on course to administer Johnson & Johnson vaccine despite confusion. Poland had said the uncertainty surrounding Johnson & Johnson’s single-dose vaccine will not affect its distribution in the country, with 120,000 doses that arrived on Wednesday soon to be distributed to vaccination centres. Read more.

Bulgaria in no hurry to send prosecutors to their EU chief. The Bulgarian Supreme Judicial Council has confirmed that it will take no action and that it is in no hurry to comply with the request made by the EU’s Chief Prosecutor Laura Kövesi to send four new candidacies for the posts of European delegated prosecutors. Read more.

Romanian government in crisis over handling of COVID-19. Romanian Prime Minister Florin Citu’s decision to fire the former health minister, Vlad Voiculescu, over his handling of the pandemic has triggered a storm in the governing coalition. Read more.

In other news, police in the German city of Ravensburg have put an end to an illegal puppy smuggling ring that had organised transport of puppies from Croatia to Germany, it was reported on Wednesday.

“The police have arrested a 33-year old and a minor suspected of illegally transporting puppies from Croatia to Germany,” Ravensburg police said in a press release. German law allows the sale of puppies only after they have reached 15 weeks of age and have been inoculated against rabies and have been in a three-week quarantine. The suspects violated the law in transporting the animals and the puppies were actually diagnosed with a virus of their digestive tracts caused by parasites. (Željko Trkanjec | EURACTIV.hr)

Serbian politician: Janša’s informal proposal could spark new conflicts in Western Balkans. Social Democratic Party of Serbia leader Rasim Ljajić said on Wednesday that Slovenian Prime Minister Janez Janša’s proposal that the best solution to the crisis in the Western Balkans is to finish the process of dissolving Yugoslavia is nothing but a call for new conflicts and for a return to the 1990s. Read more.

US Sentences Montenegrin for conspiracy to smuggle $1 billion worth of cocaine. Acting United States Attorney Jennifer Arbittier Williams announced that Vladimir Penda, a 27-year-old Montenegrin had been sentenced to five years and 10 months in prison, and two years of supervised release by a US district court, on charges of conspiracy to possess with intent to distribute five or more kilograms of cocaine on a vessel subject to the jurisdiction of the United States. Read more.