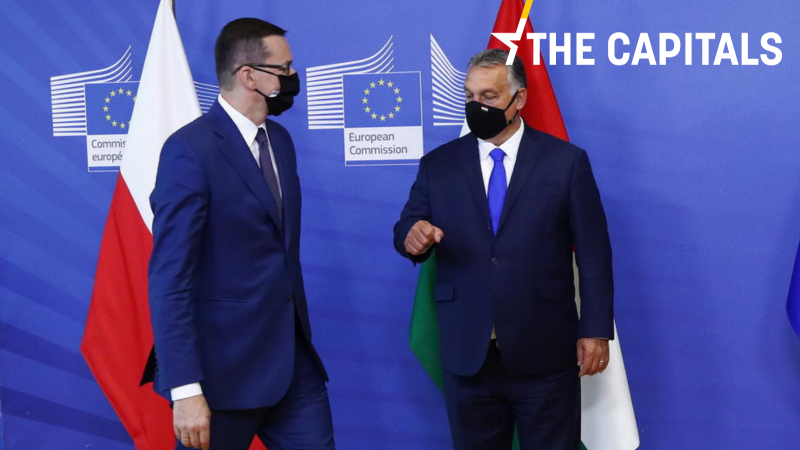 It seems Budapest and Warsaw will remain firm in their position, which is also openly backed by Slovenia. [EPA/FRANCOIS LENOIR]

Before you start reading today’s edition of the Capitals, feel free to have a look at the article Erdogan will back down at first sign of EU unity – source by Sarantis Michalopoulos.

Commission issues guidelines on ‘integration’ to clear way for EU migration pact. The European Commission on Tuesday (24 November) issued a new set of guidelines, calling on EU member states to do a better job of integrating migrants into European societies.

Critics, however, say the plan is likely to fall flat because the guidelines are not legally binding on EU member states who have no obligation to implement them. Read the full story here.

The French and German Ambassadors to Warsaw, Frédéric Billet and Arndt Freytag von Loringhoven, called on EU countries to show solidarity during the COVID-19 pandemic in a joint message to the Polish government published Monday by “Rzeczpospolita” daily. The message also made a reference to the new EU budget, which Poland and Hungary have blocked.

Both countries have been under EU investigation for undermining the independence of courts, media and non-governmental organisations. With the recovery fund conditions in place, the two risk losing access to funding over rule of law shortcomings.

Last week, EU leaders agreed in a virtual summit to allow more time for an agreement.

Polish PM Mateusz Morawiecki will meet his Hungarian counterpart Viktor Orbán in Budapest on Thursday to discuss their veto of the EU’s budget and recovery fund, a Polish government spokesman has said.

It seems Budapest and Warsaw will remain firm in their position, which is also openly backed by Slovenia. Read more.

France easies lockdown measures, says vaccination not compulsory. “The peak of the second wave of the pandemic has passed. (…) Our efforts, your efforts have paid off,” said French President Emmanuel Macron, during his televised address on Tuesday evening. Read more.

Belgium, the ‘island of closed shops’. After French President Macron announced that all stores in France may reopen from Saturday, a decision also made by all neighbouring countries, the pressure on the Belgian retail sector is increasing, the sector federation Comeos has warned. Read more.

Austria reveals vaccination strategy. Austrian Health Minister Rudolf Anschober (Greens) laid out the first steps of the country’s COVID-19 vaccination strategy on Tuesday. Starting in January, inhabitants and employees of nursing homes will be treated first, followed by patients and staff of hospitals.

In phase two, which will start in February or March, persons over the age of 65 and essential workers, such as police officers, grocery shop cashiers or teachers, will be next. Only later in spring will the rest of the population get access to the vaccines. (Philipp Grüll | EURACTIV.de)

Luxembourg’s Competition Council slaps cookie producers with €3.35 million fine. Bahlsen biscuit producers and three of its Luxembourg retailers Cactus, Auchan and Delhaize, were found to have agreed on the price of cakes, biscuits, nuts and crisps between 2011 and 2015, according to a decision issued by Luxembourg’s Competition Council. Though Bahlsen, which partly acknowledged the facts, will have to pay a total of €1.5 million, the three retailers will have to pay €1.85 million.

According to the decision, Cactus will have to pay 75% of the fine issued against the three retailers because it “reached a volume of sales in Luxembourg much higher than those of Auchan and Delhaize for the products and years in question.” (Anne Damiani | EURACTIV.com)

UK set to slash development aid budget. Boris Johnson’s ministers are preparing new laws that will reduce UK aid spending next year to just 0.5% of national income, down from the legally binding target of 0.7%, although it is unclear whether this cut will be permanent or a short-term money-saving measure in the wake of the COVID-19 pandemic. Read the full story here.

Nordic people are ignorant and pessimistic – survey. People from Sweden, Finland, Denmark and Norway got one in four answers correct when responding to 18 factual questions related to the UN Sustainable Development Goals, according to a study carried out by Gapminder, an independent non-profit foundation. Read more.

Lithuanian MPs vote against legalising remote work. Lithuania’s newly elected parliament voted down amendments to legalise remote work, though an entire party group in the new ruling coalition had to self-isolate after coming in contact with the coronavirus and was thus not able to vote. Read more.

Italy wants Christmas measures to be coordinated at EU level. A coordinated EU approach on measures to be applied across the bloc over the Christmas period is currently being discussed, Italian Prime Minister Giuseppe Conte confirmed following an exchange of views with European Commission President Ursula von der Leyen. Read more.

Slovak allies of Orban voice their support. A group of Hungarians from Slovakia issued a statement supporting the Hungarian and Polish position on the rule of law, which was the main reason for the two member states to veto the EU budget and recovery fund. Read more.

Ukrainian ambassador summoned. The Hungarian foreign ministry summoned Kyiv’s ambassador in Budapest on Tuesday after learning that the neighboring country banned for three years István Grezsa, ministerial commissioner for the development of cooperation between Ukraine and a bordering Hungarian county. Foreign Minister Péter Szijjártó described the decision as a “bolt from the blue” and said the Hungarian side had “handed over our protest and hopes that Ukraine will one day really return to the search for common success stories and cooperation based on mutual respect.”

Bulgaria has the highest COVID-19 mortality in the world. Epidemiologist Dr Peter Markov, who works in Oxford, announced that with an average of 16.18 deaths per one million, Bulgaria had overtaken Bosnia and Herzegovina (16.07 per million) and had the highest mortality from COVID-19.

“Bulgaria now ranks first in the world in terms of mortality from COVID-19. In other words, as of today, officially a person living in Bulgaria has, on average, the highest risk of dying from COVID-19, compared to a citizen of any other country in the world, be it in Africa, America, Europe or Asia”, he said. Bulgaria is yet to decide to introduce a lockdown. Up to now, all shops, restaurants and bars remain open. (Georgi Gotev | EURACTIV.com)

While more women now have higher qualifications, men continue to be overrepresented in the field of education and research, said Croatia’s Science and Technology Minister Radovan Fuchs. (Željko Trkanjec | EURACTIV.hr)

Dodik and Covic attack West’s high representative at UN Security Council. BiH Presidency Chairman Milorad Dodik, who attended a round table before the UN Security Council, attacked BiH High Representative Valentin Inzko, calling him a monster and a foreigner who cooperates only with Bosniaks from Sarajevo and speaks only on their behalf. Read more.

Abazović has received dozens of threats over the phone and across social media since the parliamentary elections, the URA party informed reporters. Threatening messages were even sent by a regional crime gang from Kotor, a city on Adriatic coast.

The head of the National Police, Veselin Veljović, confirmed that the police have been undertaking all the necessary activities to protect Abazović. Police also reported that it has no operative data or information saying that his safety has been endangered. (Željko Trkanjec | EURACTIV.hr)