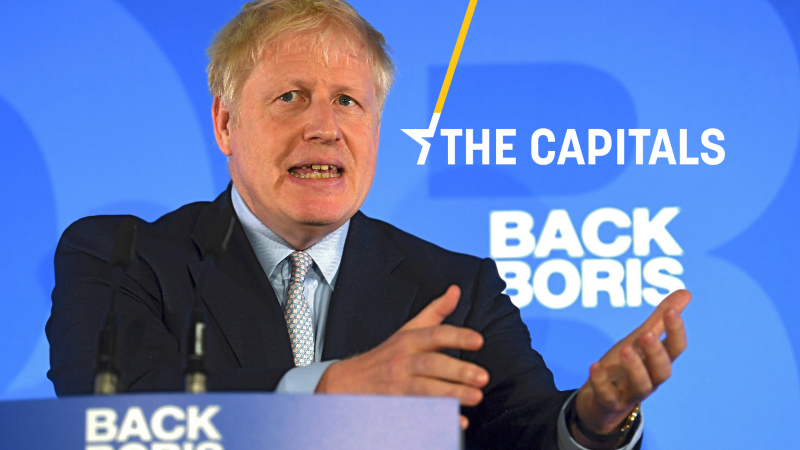 Prime Minister Johnson? The former foreign secretary took a step closer to becoming the UK’s next Prime Minister on Thursday, securing the highest number of votes in the first poll among Conservative MPs. Mark Harper, Andrea Leadsom and Esther McVey were all knocked out of the contest, which now moves onto a second round of voting next week. Read the full story here.  (Samuel Stolton, EURACTIV.com)

No consent. Prior to a closed-door agenda setting meeting of the grand coalition, the Social-Democrats insisted on making climate change and pension reform top priorities.  SPD Secretary General Lars Klingbeil said on Thursday that one needs to ‘speak frankly’ on these issues. For Ralph Brinkhaus, a faction leader in the CDU, however, the discussions, which will go on until Friday noon, are about “completely different important topics” such as the expansion of mobile phones, the weakening economy, and nursing care. Agreements on important issues are not to be expected from the conference, political commentators in Berlin said. (Claire Stam, EURACTIV.de)

In an interview with EURACTIV’s partner EFE on the occasion of the publication of his latest book “Ascent and crisis, Europe, 1950-2017, historian Ian Kershaw said the Brexit referendum does not reflect a “feeling of economic weakness, but rather the thought that British problems cannot be solved with the permanence of his country in the European Union”.

“On the one hand, they are economic problems, with the eurozone in crisis, but even more important is the migration crisis in Europe” he said.

“We need a strong Europe and, (also) our nation-states”, he added. (EuroEFE.EURACTIV.es)

Government split. For the first time, the ruling majority split in a Parliament vote, over the funding of Radio Radicale, a private radio station providing public services such as the coverage of the parliamentary debates. The Five Star Movement is against funding the media with public money but the centre-left Democratic Party has proposed to grant €3 million to the radio station in 2019 through an amendment carried thanks to the support of the other ruling party, Lega.

Eurogroup tensions. The renewed tensions between the government and the European Commission is worrying EU finance ministers who asked Italy to meet its financial obligations in order to reduce its high debt. However, Italian finance minister Giovanni Tria insisted that new measures would not be needed [full story here]. (Gerardo Fortuna and Jorge Valero, EURACTIV.com)

‘Decoupling’ North Macedonia and Albania’s EU path, by giving the green light to the former and holding the start of accession talks for the latter is not great, but is the only way forward, North Macedonia’s President Stevo Pendarovski told EURACTIV in an interview during his visit to Brussels.

“We have already been decoupled before, from Montenegro in 2011 and Serbia in 2013, as both of them started accession talks, which is great, while we had to wait despite a positive recommendation.”

Pendarovski said that the go-ahead for Macedonia could be postponed for September (a session of the German Bundestag is scheduled to discuss enlargement in September), but warned that it should be avoided, if possible, because the context might change in the meantime.

He said there is a chance “that the next Greek government, after the election on 7 July, could be much more rigid about our accession”. He also warned of growing potential for tensions with another EU neighbour, Bulgaria, as a joint expert commission working on disputed issues such as history, language or ethnicity has made little progress, due to what he said were increasingly nationalistic claims from Bulgaria.

“So then instead of a technicality, we may have political problems again… But not getting the green light would be a very bad sign for all the pro-European forces in the region, even for the countries that are already negotiating,” he said. (Zoran Radosavljevic, EURACTIV.com)

Polish-US relations. As expected, Poland signed an agreement with the US to boost the presence of American military in Poland. An additional 1,000 troops will be stationed there, while the order for more than 30 F-35 fighter jets is still pending. At the same time, Donald Trump did not exclude the possibility of scrapping the visa requirement for Polish citizens coming to the US. (EURACTIV.pl)

Flowers and a happy minister: Slovakia (Bratislava) has succeeded in its bid to host European Labour Authority (ELA). “I am a natural optimist, but I have not expected (the victory in) the first round,” said Slovak minister of social affairs, Jan Richter, after the vote in the Council. He thanked Commissioner Marianne Thyssen with a rose bouquet in front of journalists, which the Commissioner accepted but looked somewhat taken aback by, pointing out that the decision had been made by the Council.  (Zuzana Gabrižová, EURACTIV.sk)

Dalia’s EU. Lithuania’s outgoing President, Dalia Grybauskaite, is eyeing one of the top EU jobs, most likely the president of the EU Council. According to  Matas Maldeikis, a Lithuanian MEP, the current Council President, Donald Tusk, is keeping Grybauskaite on the list for the post, although Poland recently raised objections to her possible candidature, citing her individualist personality. As an experienced candidate from a new member state, who has also served as an EU Commissioner, she would stand a good chance if her nomination is endorsed by Central and Eastern Europe countries. According to Maldeikis, she could be a good candidate for the post of vice president of the EU Council, foreseen to be established for the eurozone, because of her experience with the EU budget and finances. (Angele Kedaitiene, http://eunewslithuania.com)

‘Semi-national’ pact: President Klaus Iohannis signed on Thursday a ‘national agreement’ with the opposition parties for a pro-EU Romania coalition. The parties that form the ruling coalition – PSD and ALDE – declined to sign the pact, but Iohannis said the list stays open if other political leaders change their minds. (EURACTIV.ro)

Automotive industry jobs in danger. Threatened US customs duties on cars would endanger 20% of exports from the Czech automotive industry and up to 25,000 jobs, the Automotive Industry Association (AutoSAP) has warned. The Czech Republic would be the fourth most affected European country, after Germany, Sweden and Slovakia, the Czech News Agency reported. (Ondřej Plevák, EURACTIV.cz)

Half a million votes:  New Democracy MEP Stelios Kympouropoulos, topped the poll in the European elections, earning a record 577,114 votes in total, according to official results published on Thursday (13 June). He was followed by Evangelos Meimarakis, the former president of the New Democracy party and former speaker of the House, with 496,600 votes. The previous record, from 2014, the first time that citizens voted for single candidates instead of the party in a single ballot all over the country, was held by Manolis Glezos, a SYRIZA MEP and a praised WWII resistance hero, with 466,902.

Paris standing over two boats: There is no provision for the establishment of a French military base or unit in Cyprus, French Foreign Minister Jean-Yves Le Drian told a joint press conference with his Turkish counterpart on Thursday (13 June). He denied press reports from mid-May, published after official meetings in Paris, which said Nicosia had reached a military agreement with France allowing the French Navy to use infrastructure and permanently service its warships in the naval base in the Mari region. But establishing a base and using an existing one are two different things, Cypriot sources clarified. (Theodore Karaoulanis, EURACTIV.GR)

GDPR: Only 44% of Bulgarians, the lowest level in the EU, know that the General Data Protection Regulation guarantees the right to have your data deleted and to be forgotten, according to Eurobarometer. Respondents in nine countries are now less likely to feel they have at least some control, with the largest decline seen in Bulgaria. (Dnevnik.bg)

Human Shield reborn: Following the collapse of the anti-establishment party Human Shield, aligned with the Five Star Movement in the European Parliament, its leader Ivan Vilibor-Sinčić said on Thursday that  ‘this is not the end’. “We will come out stronger than ever,” he pointed out and introduced new party representatives in Sabor: Damjan Vucelić and Snježana Sabolek.

He announced that the party will over the next months work on reorganisation and restructuring while everyone willing to join the party should feel free to do so.

During the summit of the Central European Initiative (SEI) held in Trieste, Italy, Slovenia’s Foreign Minister Miro Cerar stressed the significance of the EU’s enlargement ‘to the states that meet these conditions’. In this respect, Cerar stressed a positive example of North Macedonia, which resolved a long-standing dispute with Greece over its name and should be given the date for starting the negotiations by the end of this month. (Karla Juničić, EURACTIV.hr)

Ljajić: Less cooperation in Western Balkans Serbian Trade Minister Rasim Ljajić has said that there is “practically less and less cooperation” in the Western Balkans, “because we in the region are acting more like competitors than like partners, as proved by non-customs barriers and the imposing of taxes that make any form of regional cooperation meaningless.” “Besides trade, there is actually no cooperation on other grounds, and trade itself is accompanied by a whole host of problems,” Ljajić told the opening of the International Agricultural Fair in Tesanj, Bosnia-Herzegovina. (Beta / EURACTIV.rs)