Pro-Trump Estonian minister resigns after dreams of US civil war 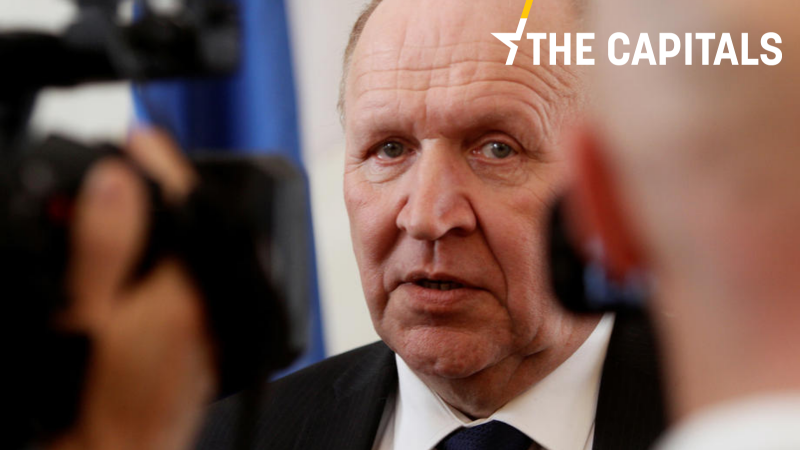 Helme's son, Finance Minister and EKRE party chair, Martin Helme also appeared on the same TRE radio talk show and joined his father's rhetoric, saying the US election had been faked “plainly, boldly and on a massive scale”. [EPA/VALDA KALNINA]

Before you start reading today’s edition of the Capitals, feel free to have a look at the article “Russia deploys troops to Nagorno-Karabakh after ceasefire deal signed“.

Estonian Interior Minister Mart Helme announced his resignation on Monday after his comments on the outcome of the US presidential election caused an outcry. Helme, of the populist EKRE party, questioned the legitimacy of Joe Biden’s victory and supported the claims of the Trump campaign in a radio interview broadcast on Sunday. Biden, whom he described as “a corrupt character”, won the election thanks to the “deep state”, he said. But he went further. EURACTIV’s Pekka Vänttinen has more.

Germany ‘ready to take responsibility’, Merkel tells Biden. Germany and Europe are ready to contribute more to the transatlantic relationship, German Chancellor Angela Merkel said on Monday. However, many saw comments by her finance minister dampen those expectations. Read more.

French teachers strike, protest insufficient health protocol. National education unions are calling on primary and secondary school teachers to observe a “health strike” on Tuesday as teachers claim that the sanitary conditions in schools, colleges and high schools – which remain open under the second lockdown – do not ensure staff and students are protected.  Though children above the age of six have been obliged to wear masks for two weeks now, many other sanitary measures, such as distancing in corridors and courtyards, are not applicable in all establishments. (Lucie Duboua-Lorsch  | EURACTIV.FR)

EU Council chief offered condolences in Vienna. EU Council President Charles Michel offered on Monday his condolences and discussed measures against Islamist terrorism with Austrian Chancellor Sebastian Kurz at a joint conference in Vienna, one week after the terrorist attack shook the country. The EU should reach a common approach towards the threat posed by foreign terrorist fighters returning from the battlefields to Europe, said the Austrian chancellor. The Viennese attacker had planned to go to Syria and join the Islamic State. (Philipp Grüll | EURACTIV.de)

Luxembourg government appeals Panama Papers case. The government will appeal the administrative court’s decision that found the Direct Taxation Administration had “exceeded its powers” by requesting information about the clients of lawyers it was investigating, announced Finance Minister Pierre Gramegna. Read more.

Internal Market bill suffers defeat. Boris Johnson’s government suffered a series of defeats to his controversial Internal Market bill on Monday after the House of Lords removed the sections of the bill that would breach international law. Read the full story

Norway plans heavy oil ban around Svalbard. The Norwegian government has announced plans to ban heavy fuel oil (HFO), a dirty marine fuel that propels most vessels, around its Svalbard archipelago in the Arctic Ocean. The effort comes as UN efforts have been deemed too slow. Read the full story here.

More Italian regions to impose stricter COVID-19 measures. The initial division of Italy into ‘red’ (Piedmont, Valle d’Aosta, Lombardy, Calabria), ‘orange’ (Apulia, Sicily) and ‘yellow’ zones will soon be updated depending on how the epidemiological evolves across the country. Read more.

Spain says slapping tariffs on US  a ‘step in the right direction’. The EU’s decision to impose tariffs on the US in retaliation for Washington providing illegal aid to plane manufacturer Boeing is a “step in the right direction”, said Spanish Agriculture Minister Luis Planas as Brussels announced its decision on Monday, EURACTIV’s partner EUROEFE reported. Read more.

Portugal enters state of emergency. Portugal on Monday entered a state of emergency that will last until 23 November, meaning 121 municipalities deemed to be most at risk of new COVID-19 infections will now have to respect a curfew. Read more.

With or without Trump, US soldiers will be present in Poland. Polish President Andrzej Duda ratified the agreement on the American military presence in Poland on Monday, which National Security Bureau head Paweł Soloch said will be “implemented regardless of who will be the tenant of the White House.” Read more.

“For me, as someone who had been working in IT for two decades, it is obvious that we can’t break encryption and at the same time, stay secure,” said Czech MEP Kolaja. “Together with my Pirate colleagues, we will do everything we can to stop this,” he added. Kolaja also asked Czech Ambassador to the EU Edita Hrdá to reject the document at the next COREPER meeting. (Aneta Zachová | EURACTIV.cz)

Orbán introduces partial lockdown, strictest measures to date. Hungary introduced new measures to contain the surge in coronavirus cases from Wednesday, including an 8pm to 5am curfew, the closure of restaurants, gyms, museums and theatres, bans on events and assemblies, and e-learning for high school and university students, Prime Minister Viktor Orbán announced in a Facebook video.

Meanwhile, schools in Cambodia’s capital, Phnom Penh, and the surrounding area will be shut for two weeks as a precaution after Hungarian Foreign Minister Péter Szijjártó tested positive for COVID-19 following a visit to the country last week, AP reported. Cambodia’s education ministry said in a statement that the shutdown was necessary because it has been unable to collect enough information from the parents’ students who had direct or indirect contact with Szijjártó during his visit last week. (Vlagyiszlav Makszimov | EURACTIV.com)

By Monday morning, only 11 of the stations, where anyone can get tested for free, were set up and operational. “The mission was clear, the deadline unambiguous,” said the prime minister, but assured he would not ask Krajči to hand in his resignation over this. (Zuzana Gabrižová | EURACTIV.sk)

10,000 anti-Bulgarian publications in North Macedonia, says Sofia. There have been over 10,000 hate speech publications regarding Bulgaria in the Republic of North Macedonia in the last few months. Then we stopped counting them. This should come to an end, Bulgarian Foreign Minister Ekaterina Zaharieva announced during an online press conference with North Macedonian and German foreign ministers, Bujar Osmani and Heiko Maas. Read more.

EU funds for Romania have 38.9% absorption rate, says minister. Romania has obtained €8.8 billion from the EU for projects funded by the Cohesion Policy in the bloc’s current Multiannual Financial Framework (MFF), which, according to EU Funds Minister Marcel Bolos, corresponds to an absorption rate of 38.9%.

Romania received €3.2 billion in the past year alone, Bolos told a news conference where he presented his ministry’s performance, adding that since he took over the ministry in November 2019, more than 2,100 projects have been approved. ”During this year, we signed 2,185 financing contracts, with a total value of €10 billion,” Marcel Bolos said. Romania has a total allocation of around €22.5 billion from the Cohesion Policy in the 2014-2020 MFF.

In other news, Romania’s government does not plan to increase taxes in 2021 despite a ballooning budget deficit and increased financing needs. While the budget for 2021 is yet to be drafted by the government, Prime Minister Ludovic Orban said the framework for the budget does not include any tax increases, while any spending hike needs to be carefully correlated with economic growth. (Bogdan Neagu | EURACTIV.ro)

The government should ‘walk the talk’, Kraus told a conference addressing the issue of education about the Holocaust, held on the International Day Against Fascism and Antisemitism and the 82nd anniversary of the ‘Kristallnacht’ pogrom.

On his Twitter profile, PM Plenković underscored that the International Day Against Fascism and Antisemitism is an occasion to strongly condemn criminal ideologies that have caused fear and human suffering. “Educating the young is key to building a society where there is no room for exclusiveness, intolerance and violence. #NeverAgain,” Plenković tweeted. (Željko Trkanjec | EURACTIV.hr)

While 27% of respondents assessed the work of the government to be positive or very positive, 43.7% saw it as negative or very negative. The ruling Democrats (SDS) now top party rankings with 19.6%, meaning they gained almost one percentage point since October. (Željko Trkanjec | EURACTIV.hr)

The US will not change its policy in BiH. “The United States’ commitment to peace and stability in BiH enjoys the long-standing support of both Democrats and Republicans. The policy of the United States government is focused on providing support to the peoples of BiH in the implementation of the Dayton Peace Accords, preserving the sovereignty and territorial integrity of the country and promoting Euro-Atlantic integration,” the US Embassy’s Public Relations Office said in response to a question by daily Avaz. (Željko Trkanjec | EURACTIV.hr)

Thaci pleads not guilty to all war crime charges. Kosovo’s former president and ex-political representative of the Kosovo Liberation Army (KLA), Hashim Thaci, has pleaded “not guilty to all charges” during his first appearance in the Kosovo Specialist Chambers in The Hague, adding that “the indictment is invalid”. Read more.