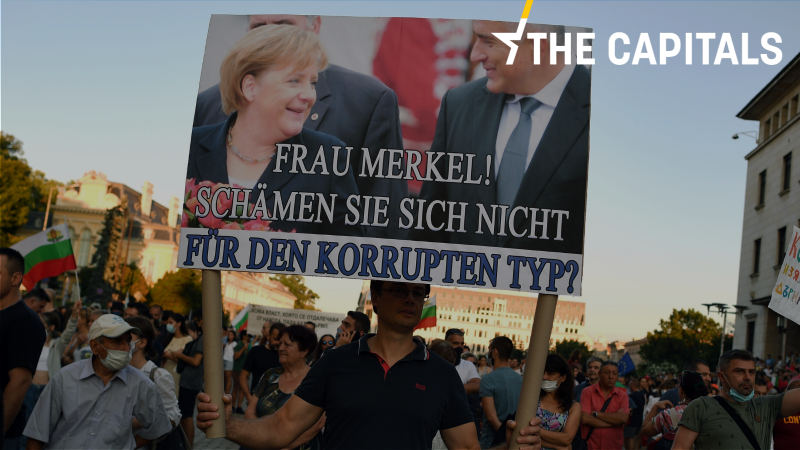 A protester holds a placard reading 'Ms. Merkel, aren't you ashame of this corrupt guy?" during an anti-government protest in front of the Council of Ministers in Sofia, Bulgaria, 29 July 2020. [Vassil Donev/EPA/EFE]

Before you start reading today’s edition of the Capitals, feel free to have a look at the article “Far-Right Parties in the European Parliament Explained“.

More than 100 Bulgarian citizens and opposition politicians who took part in 2020 mass protests against the government of Boyko Borissov and the Chief Prosecutor Ivan Geshev were wiretapped after being accused of planning a “coup,” acting Interior Minister Boyko Rashkov told parliament. Read more.

Tax fraud: Top German court confirms cum-ex trades were illegal. Germany’s Federal Court of Justice in Karlsruhe dismissed the appeal of two British traders on Wednesday, confirming that so-called “cum-ex” transactions are illegal, in a key ruling in what has become the biggest tax scandal in the country’s history involving hundreds of suspects. Read more.

Austria opposes introduction of general compulsory vaccination. Austrian Chancellor Sebastian Kurz has rejected a suggestion by the head of the country’s bioethics commission that compulsory vaccination should be introduced for certain professions – including for people working in healthcare or education. Read more.

France unveils new COVID-19 protocol for upcoming school year. All French children are to return to school as of 2 September to ensure the “success and well-being of students,” announced Education Minister Jean-Michel Blanquer on Wednesday, adding that if COVID-19 cases are detected in classrooms, only vaccinated children will be allowed to continue in-person learning while the unvaccinated ones will have to follow the class from home for seven days. Read more.

UK lifts quarantine restrictions for those fully vaccinated in the EU. People who have been fully vaccinated against COVID-19 in the European Union will from next Monday not need to isolate when coming to England, Scotland and Wales from an amber list country.

The move, which ministers hope will encourage EU countries to reciprocate and ease restrictions on vaccinated travellers from the UK, covers most European countries. The vaccinations must be licensed by the European Medicines Agency (EMA). The changes will not include travellers from amber list country France, who will still be required to quarantine, regardless of whether they are fully vaccinated. (Benjamin Fox | EURACTIV.com)

Irish health minister: Booster COVID-19 shots to be available in autumn. Ireland’s COVID-19 vaccination programme is to be extended, with boosters offered to older and vulnerable people and vaccines to children, amid government concerns about the potential for reinfection and more cases among young people. Read more.

Salvini’s Lega joins protests against COVID certificate. Several Italian lawmakers from right-wing nationalist Lega party – but not its leader Matteo Salvini – joined protests against the government’s decision to make a COVID-19 certificate a requirement to enter cinemas, bars and gyms from 6 August. More.

Spain rejects use of COVID passport for non-travel purposes. Health Minister Carolina Darias has refused to approve a national regulation that would require a complete vaccination schedule or a negative test for access to indoor areas such as bars and cinemas, EFE reported.

Such a measure already applies in Galicia and the Canary Islands in Spain, as well as in France, Italy and Portugal. The minister said in certain indoor areas such as bars or nightclubs, the regions may still regulate a complete vaccination or a negative test for entry.

But she assured that the EU’s COVID certificate has limited use, and is intended for travel within the European Union. According to the minister, this is its legal status, and any other usage would require a new legal framework. (Pol Afonso, EURACTIV.com)

Greece says Turkey continues to block returns of migrants. Greece made on Wednesday a new request to the EU Commission and FRONTEX for the immediate return to Turkey of 1,908 rejected asylum seekers living on the Aegean islands. Athens says Turkey has been blocking the returns of people not eligible for asylum for the past 17 months. More.

Portuguese government to review legislation against racism. Portugal has said it will review its anti-racism laws, including those concerning fines and sanctions, the government announced in its national plan against racism published on Wednesday. Read more.

In other news, more than half of the Portuguese population (52%) are now fully vaccinated against COVID-19, according to the weekly vaccination report released on Tuesday by the health authority (DGS). Meanwhile 67% have had at least one dose.

In Portugal, the vaccination campaign against COVID-19 started on 27 December, 2020, and single-dose (Janssen) and double-dose (Pfizer/BioNTech, Moderna and AstraZeneca) vaccines are currently being administered. (Elsa Resende, Lusa.pt)

Czech government proposes extra paid leave for vaccinated. Prime Minister Andrej Babiš said on Wednesday that he will propose to his government that all employees working in the state administration, including ministry employees, teachers or policemen, who have been vaccinated against COVID-19, would receive two extra days paid leave. Read more.

Slovakia’s health ministry says ​third wave is here. The third wave of the pandemic has already begun in Slovakia, the health ministry’s epidemiologist Martin Pavelka from the Institute of Health Analysis said on Wednesday, warning that the reproduction number has been above the critical value of one for three weeks. Read more.

EU funds Romania’s brown bear search. Romania, which is home to an estimated 6,000 brown bears, the largest population in the EU, has launched a project to find the real population of these bears, using EU cohesion funds. Read more.

Croatia meets its Euro commitments as planned. Croatian Finance Minister Zdravko Marić has said his country is on track to meet its commitments under the mechanism for the country’s adoption of the Euro currency. “We are not running late. Quite the contrary, we are a bit faster,” said Marić after a meeting of the national council for the adoption of the euro. Read more.

Macedonian PM proposes local elections on 31 October. North Macedonia’s Prime Minister Zoran Zaev has announced elections for 31 October, suggesting that the date would ensure the campaign does not coincide with the census.

In April, North Macedonia planned to hold its first census since 2001, but it was delayed until September due to the pandemic, but also because of rising tensions between the Macedonian majority and ethnic Albanian minority. Zaev noted that all political parties should state their opinions on the matter, and if there is agreement, the proposal shall be incorporated in the electoral code. (Željko Trkanjec | EURACTIV.hr)

EU delegation calls for investigation into alleged vote buying. The EU delegation in Albania has called on the government to “complete the outstanding investigations and proceedings on alleged vote-buying and leaking of sensitive personal information” during the electoral period in the country, exit.al reported.

The statement follows the publication of the OSCE/ODIHR final report on the 2021 elections. The report called accounts of vote-buying “credible” and said they must be fully investigated.

It also said that the leaking of personal information was a cause for concern and investigations should be completed. On Facebook, the EU Delegation also pointed out the importance of further improving the electoral framework in Albania, in line with OSCE recommendations. The OSCE/ODIHR report noted that there were outstanding issues that should be addressed before the next election. (Željko Trkanjec | EURACTIV.hr)