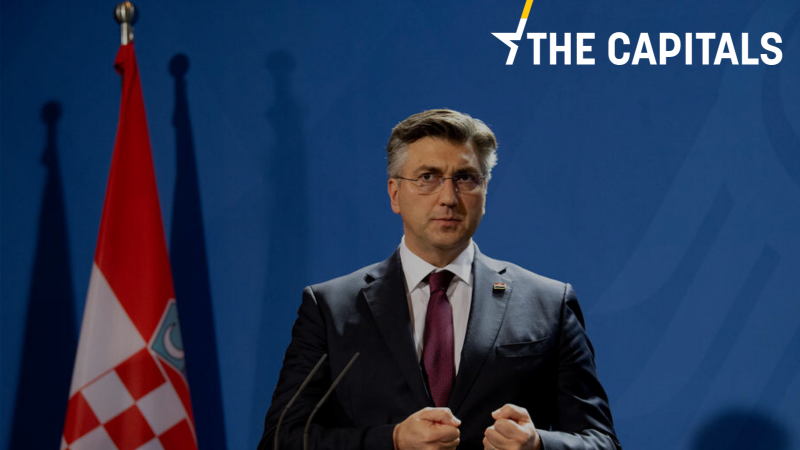 Before you start reading today’s edition of the Capitals, we invite you to read the story “EU to test its readiness to face Coronavirus at extraordinary meeting” written by Sarantis Michalopoulos.

Also, feel free to have a look at the article “CDU crisis to put question mark on German EU-Presidency” written by EURACTIV Germany’s Claire Stam.

ZAGREB. One of the most powerful members of Croatian ruling party HDZ (EPP), vice president Milijan “Vaso” Brkić, has officially endorsed the candidacy of former foreign minister Miro Kovač, who is representing a rebel faction and is running against the Prime Minister Andrej Plenković.

In a controversial TV interview, Brkić accused the PM of creating a destructive personality cult and surrounding himself with yes-men who are not loyal to the party. Besides, he noted that the rift between the HDZ’s moderate and conservative wing had started when the party voted on the Istanbul Convention on preventing and combating violence against women and domestic violence, adding that “we did not need that divisiveness. We should have approached the issue of domestic violence differently”.

But how did the Croatian PM reacted to this interview? EURACTIV Croatia’s Tea Trubić Macan reports.

Thuringia’s aftershocks reach the CDU. Germany’s defence minister, Annegret Kramp-Karrenbauer, decided to step down as leader of the Christian Democratic Union on Monday (10 February) during a  party executive committee meeting. While she will remain in office as party leader until December and continue as defence minister, she pledged to “organise the process of candidacy for Chancellor this summer, continue to prepare the party for the future, and then give up the party chairmanship”.

Kramp-Karrenbauer’s decision comes on the heels of the political crisis in Thuringia, where the state branch of her party joined with the liberals (FDP) and far-right Alternative for Germany (AfD) to elect Thomas Kemmerich as the Minister-President. Although Kemmerich then stepped down after a brief 25-hour stint, the election raised questions about her leadership, as the state party openly defied her orders not to work with the AfD. (Sarah Lawton | EURACTIV.de)

France unlikely to inject more money into the EU budget. After European Parliament negotiators came to Paris yesterday (10 February) to try and convince the French government to increase its contribution to the EU budget, it seems that France will not budge despite being keen to keep agriculture spending, of which it is the main beneficiary, intact. Instead, France would prefer to see the budget financed by the EU’s own resources with the implementation of a carbon border tax or a by a so-called GAFAM levy on Google, Apple, Facebook, Amazon, and Microsoft. To read more on this issue, click here

Another extension. The mission of Koen Geens (CD&V) to form a federal government has been extended by the Belgian King until 17 February. According to him, the best coalition formula still remains one that enjoys broad political support, namely based on the Socialist PS and the Flemish nationalist N-VA. However, so far the parties have not found common ground for an agreement. (Alexandra Brzozowski | EURACTIV.com)

Social democrats demand the government withdraws from Airbus contract. Since Airbus admitted to “wrongdoing” and insufficiently labelling “political contributions” to officials in connection with Austria’s purchase of 18 “Eurofighter” jets in 2003, the defence spokesperson of the social democratic party (SPÖ) suggested that the government use a clause in the contract to withdraw from it, even though it is still unclear who has been paid. EURACTIV Germany’s Philipp Grüll has more.

Finland will become the sole uranium producer in the EU. The Finnish government has granted a uranium recovery and refinery permit to Terrafame, a 70% state-owned company. Since the Czech Republic and Romania have stopped their operations this decision will make Finland the EU’s only uranium producer. EURACTIV’s Pekka Vänttinen digs deeper.

Too much friction. Boris Johnson’s chief ally has warned businesses that the days of ‘frictionless’ trade with the EU are over when an eleven month post-Brexit transition period ends in December. Benjamin Fox reports from London.

UK’s close relationship? Following the success of the nationalist Sinn Féin party in this weekend’s Irish general election, the UK have said that they hope both ruling parties become close partners. “The UK and Ireland are close neighbours and friends and we look forward to continuing to work together,” a spokesperson for UK Prime Minister Boris Johnson said yesterday, adding that the ‘close relationship’ between the UK and Ireland should continue regardless of Sinn Féin’s election success. Sinn Féin’s central policy is to campaign for a united Ireland, with Northern Ireland rescinding its constitutional alliance with Great Britain. (Samuel Stolton | EURACTIV.com)

Tension in the coalition. Renzi’s centrist party Italia Viva has threatened to trigger a political crisis by proposing a no-confidence motion against Justice Minister Alfonso Bonafede in the event that the other co-ruling parties force the approval of the statute of limitations’ reform. Anti-establishment Five Star Movement and centre-left Democratic Party (PD) have agreed to scrap time limits for prosecution for those found guilty in a first trial, which is considered unconstitutional by Italia Viva. (Gerardo Fortuna | EURACTIV.com)

Closed hosting structures. The Greek government has announced that it will requisite properties and land for use in managing the migration/refugee crisis. Particularly, government spokesman Stelios Petsas said on Monday that a legislative act published Monday will allow the requisition for “reasons of public interest”, such as for the creation of “closed hosting structures”. The leftist main opposition Syriza party reacted strongly saying the “closed centres” do not help the decongestion of the islands that bear the heaviest burden. Read more on EURACTIV’s partner Athens-Macedonian News Agency.

Presidential race. In the latest poll by IBRiS for Polish daily Rzeczpospolita, Polish President Andrzej Duda continues to lead in the polls with 43.7% over Małgorzata Kidawa-Błońska (29.2%) just a few months away from the presidential elections, which are set to take place on 10 May 2020. Kidawa-Błońska, who is a candidate of the largest opposition party (PO), is well ahead of independent candidate and TV personality Szymon Hołownia (8.1%), progressive MEP Robert Biedroń (6.9%) and centrist conservative-leaning Władysław Kosiniak-Kamysz (4%).

However, when it comes to political party support, the ruling Law and Justice (PiS) party appear to be losing ground with 35.9%, while PO has 27.2%. The Left is third with over 15%. (Łukasz Gadzała | EURACTIV.pl)

Coal belongs to the past. More than three-quarters of Czechs want Czechia to be a coal-free country, while over half prefer renewable sources of energy, according to a  survey by Median. The Czech government has so far presented different approaches to the Czech energy mix and although discussions on a coal phase-out have already started, the government is eyeing a future in nuclear energy. (Aneta Zachová | EURACTIV.cz)

Fukuyama: ‘Hungary’s politics is ironic’. In an article by historian Francis Fukuyama agrees  Fukuyama writes that Hungarian and Polish voters “felt their national identity was threatened by immigration and liberal social values”. He also described PM Viktor Orbán’s rhetoric regarding “Hungarian national identity based on Hungarian ethnicity” coupled with the endorsement of “illiberal democracy, in which democratic majorities do not necessarily feel bound to respect universal human rights”, as ironic in light of the country’s break from the Soviet regime. (Željko Trkanjec | EURACTIV.hr)

Socialists against Orban mkII Cabinet. Just days after Ludovic Orban was designated to be the country’s new prime minister by President Klaus Iohannis after his government lost a no-confidence vote in parliament, the Socialist Party (PSD) attacked his designation before the Constitutional Court. On Monday (10 February), Orban presented the parliament with the same list of ministers and an updated governing plan, and MPs should decide on the calendar for voting the new government on Tuesday. (EURACTIV.ro)
///

Foreign minister supports Turkey’s EU membership. Slovenian Foreign Minister Miro Cerar has called for a strengthening of EU-Turkey relations, including in the fight against illegal migration. He supported the prospect of Turkish membership of the EU and promised all possible assistance from Slovenia to this end during the EU Council Presidency next year. (Željko Trkanjec | EURACTIV.hr)

Dialogue and Reciprocity. Kosovo Premier Albin Kurti has said that reciprocity measures toward Serbia will be applied in accordance with a resolution passed by the Kosovo Assembly of 2 Dec 2011, while the dialogue will continue based on another resolution that will be prepared by the incumbent government and sent to the assembly for adoption, the Koha Ditore newspaper reported on 10 February. (EURACTIV.rs)

Leader of Croats: There is very little Russian influence here. “Russia creates a balance of power in the world and plays an important role in the Balkans but unfortunately has little influence in BiH”, said Dragan Čović, the Chairman of BiH House of Peoples and the leader of HDZ BiH told Rossiyskaya Gazeta while visiting Moscow.

“Russia is constantly being accused of its politics and diplomacy having a very strong influence in BiH. I would say that, unfortunately, there is very little Russian influence here,” Čović said., adding that BiH should make efforts to develop economic, cultural and other types of bilateral cooperation with the Russian Federation. EURACTIV Serbia’s Željko Trkanjec  has more.

Settle our status on Kosovo.  The association of the Kosovo Montenegrins’ sent demands to Kosovo President Hashim Thaci and Prime Minister Albin Kurti seeking to regulate the formal and legal position of the Montenegrin community in Kosovo. They want to be recognised by the Constitution. “Our constitutional recognition or non-recognition will be important to international actors in assessing Kosovo’s progress in respecting human rights”, according to Association. (Željko Trkanjec | EURACTIV.hr)