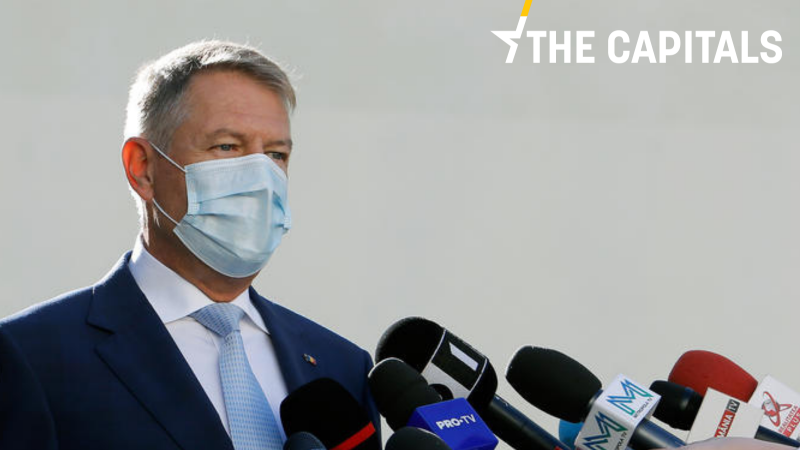 Before you start reading today’s edition of the Capitals, feel free to have a look at the article How Bulgaria gave Gazprom the keys to the Balkans, by Georgi Gotev and Germany weighs in on EU’s bid to regulate digital giants, written by Samuel Stolton.

German Bundestag pushback over lockdown. German Chancellor Merkel on Thursday faced the Bundestag in a debate over the COVID-19 lockdown, which will go into effect on 2 November. While she called the new measures “suitable, necessary and proportionate,” the opposition was not impressed by the move. Read more.

Macron ups protection after Nice attack. The French army’s “sentinel” operation will be reinforced from 3,000 to 7,000 soldiers to protect places of worship and schools, President Emmanuel Macron announced following a knife attack that killed two women and a man on Thursday in Nice. Read more.

New national measures will be presented on Saturday (31 October), the government has announced. (Philipp Grüll | EURACTIV.de)

Recession worse than expected. The IMF has downgraded its forecast for the UK economy in 2020 in its report published on Thursday, forecasting a 10.4% plunge in GDP,  worse than the 9.8% it had previously predicted, on the back of the COVID-19 pandemic and the UK’s exit from the EU’s single market. Read more.

The IMF also called on UK Prime Minister Boris Johnson’s government to continue its wage subsidy scheme and support for businesses hit by the pandemic, measures which it praised as “one of the best examples of coordinated action that we have seen globally.” (Benjamin Fox | EURACTIV.com)

No need for a statutory minimum wage. Finland says it will stick to its traditional wage bargaining system as opposed to being subjected to an EU-wide minimum after the European Commission presented on Wednesday a proposal for a Directive aimed at ensuring that employees in the Union are paid an adequate minimum wage. Read more.

Adequacy of Italy’s ministers questioned. Prime Minister Giuseppe Conte should “evaluate each minister and verify if they are able to deal with the emergency,” argued the leader of coalition partner Democratic Party (PD) in the Senate, Andrea Marcucci. “We need a coherent majority,” he added. Read more.

Spanish regions brace for partial COVID-19 lockdown. A range of Spanish regions has started sealing their borders ahead of the All Saints Day holiday, a time of year Spaniards would normally make trips around the country, as health authorities recorded an additional 19,000 coronavirus infections on Wednesday. Read more.

Last warning before a total lockdown in Greece. The announcements of Greek PM Kyriakos Mitsotakis on Friday for strengthening the restrictions will be the last as “the next time will be for a new total lockdown”, government sources have said. Read more.

Polish science and education ministry threatens universities. Some Polish universities could lose government funds after they cancelled compulsory classes currently held online due to the COVID-19 pandemic on Wednesday and allowed students to participate in protests against the Constitutional Tribunal’s abortion ruling, Education and Science Minister Przemysław Czarnek has warned. Read more.

Calls for general ban of Hezbollah The Czech parliament’s lower house adopted this week a resolution calling the Lebanese Shi’ite group Hezbollah “a terrorist organisation” that  “threatens all democracies”, arguing that “the misleading division of this organisation into military and political parts” must be rejected as “it acts as an internally interlinked structure”.

It also calls on the Czech government to push the EU into abandoning its policy whereby it only bans the military wing despite Hezbollah not recognising this distinction. (Ondřej Plevák | EURACTIV.cz)

Hungary reacts to terrorist attacks in France. Western European politicians should stop spending their time debating the rule of law in Hungary and Poland and instead defend their own citizens from terrorist attacks, said Hungarian Justice Minister Judit Varga. Read more.

Slovakia’s PM doesn’t love his job. In light of the COVID-19 pandemic, Slovak Prime Minister Igor Matovič said he has no desire to run the for the office he finds himself currently in. Read more.

Would-be Prime Minister-Designate Jože Damijan said that DeSUS and NSi are willing to start talks though it has not been disclosed when such talks would take place. (Željko Trkanjec | EURACTIV.hr)

11 illegal Albanian migrants in Southampton.  A ship which was found carrying 11 migrants, including a pregnant woman, had come to Southampton from France, the Home Office has confirmed.

The Albanians were detained for alleged immigration offences, with a pregnant woman taken to hospital and a 17-year-old boy transferred into the care of children’s services. (Željko Trkanjec | EURACTIV.hr)