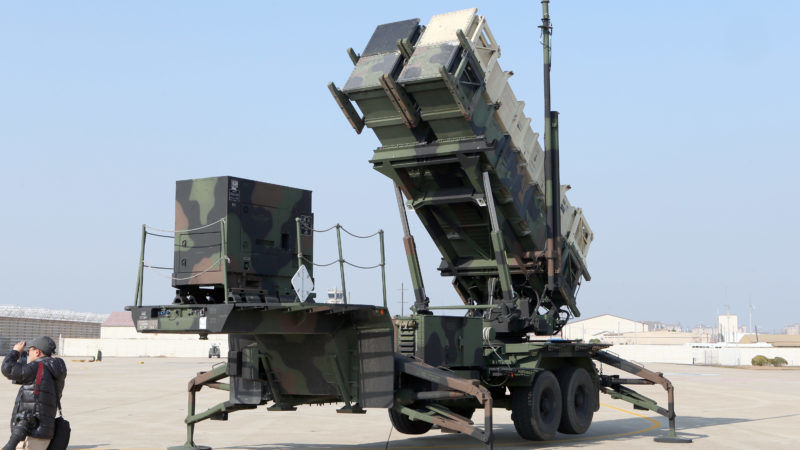 A photograph made available on 13 February 2016 showing a patriot missile system unveiled by the US military during the joint South Korea-US aerial exercise Max Thunder in 2014. [Stringer/EPA]

Romanian military purchases are not intended to put a strain on relations with nearby Russia but to strengthen the country’s defences, President Klaus Iohannis said on Saturday  (15 July).

Earlier this month, the US State Department said it has approved the possible sale of seven Patriot missile defence systems worth $3.9 billion (€3.4 billion) to Romania.

A member of NATO since 2004 and of European Union since 2007, Romania has committed to boosting its defence spending to two percent of gross domestic product this year.

Asked whether talk of acquiring Patriot missiles and recent military drills were straining relations with Russia, Iohannis told reporters: “Firstly, we must look at what these acquisitions are for.”

“We are not getting ready to attack anyone. We are preparing … for our army to benefit from modern, efficient features. They are meant to defend us, to guarantee the security of Romanians.”

Asked whether recent regional military exercises could deter Russia, Iohannis said: “Of course they could, and I think they do so.”

Russia, whose annexation of the Black Sea peninsula of Crimea from Ukraine in 2014 prompted concern among NATO’s eastern members such as Poland and the Baltic states, has said NATO was threatening stability in Eastern Europe by building up its military presence there and staging war games.

A final decision by Romania to buy the missile defence systems, whose prime contractors would be Raytheon Co and Lockheed Martin Corp, has yet to be announced by the country’s defence ministry.

Romania is hosting a US missile shield capable of shooting down rockets from countries such as Iran that Washington says could one day reach major European cities.

Moscow says the shield’s aim is to neutralise Moscow’s nuclear arsenal long enough for the United States to strike Russia in the event of war. Washington and NATO deny that.