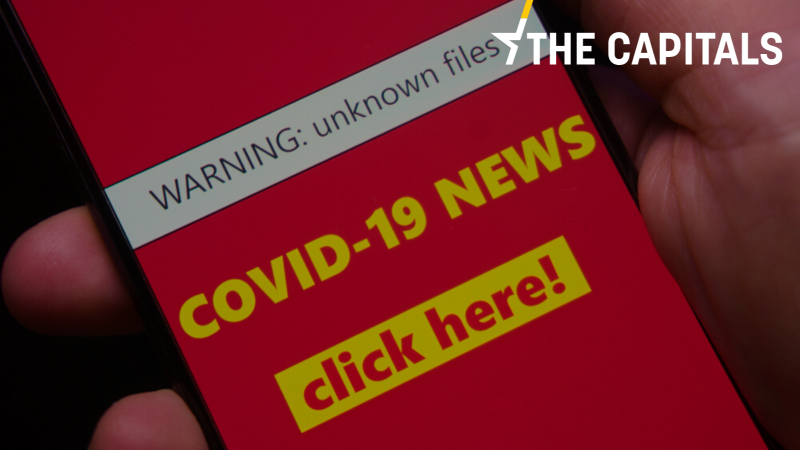 The declaration of a state of emergency in Romania due to COVID-19 brought with it a premiere in the country - the authorities started to close down news sites on the grounds that they were promoting false information related to the pandemic. [Clokair/Shutterstock]

We would like to remind you that everyone at EURACTIV is keen to continue delivering top-quality content that covers the EU in a clear and unbiased way, despite being heavily impacted by the current crisis. As we, at EURACTIV, firmly believe that our readers should not have to access content via a paywall, we are asking you to consider making a contribution. All you need to do is follow this link.

If you are interested in finding out more about the latest lifting of lockdown measures across Europe and beyond, feel free to check out EURACTIV’s comprehensive overview, which is regularly updated with the help of our network of offices and media partners.

Europe’s defence budget up in the air amid COVID-19 recovery spending. EU countries should avoid slashing defence spending under pressure from the economic fallout of the coronavirus, the EU’s chief diplomat Joseph Borrell said on Tuesday (13 May), warning that the COVID-19 crisis could spark unforeseen security challenges. Read more.

EU to preserve refund safety-net for travel vouchers. The European Commission will publish on Wednesday (13 May) a common rulebook for voluntary travel vouchers, which advises that state aid could be used to set up guarantee funds, according to documents seen by EURACTIV.

BUCHAREST. The declaration of a state of emergency in Romania due to COVID-19 has brought with it a first for the country – the authorities have started to close down news sites for promoting false information related to the pandemic.

The first victim of the decree was the stiridemoment.ro website on 18 March. An article wrongly stated that supermarket chains Kaufland, Auchan, Metro, Carrefour and Lidl were closed because of the pandemic.

On March 17, the same website published an article entitled “The government is secretly preparing a mega-operation to bring Romanians from abroad to the country.”

The Ministry of Interior citing both stories to request closure of the website. Both were widely reproduced on social networks. Read more.

Continued pressure to open borders. The pressure continues to mount on conservative Interior Minister Horst Seehofer (CSU) not to extend the closure of Germany’s borders, which is set to expire on 15 May. While the European Commission will present guidelines to lift the border controls currently in place today (13 May), Seehofer is reluctant to do so. EURACTIV’s Sarah Lawton has more.

Meanwhile, the former East German state of Thuringia has lifted its limit on participants at public gatherings as of today (13 May). This allows for demonstrations such as those that took place over the weekend. (Sarah Lawton | EURACTIV.de)

Twitter taken to court for hate speech. Four anti-discrimination associations took Twitter to court in Paris, claiming that the social network had “long and persistently” failed to meet its obligations in terms of content moderation, according to a document sent to AFP. EURACTIV France has the story.

Phase 2. Belgium’s National Security Council meets on Wednesday to discuss Phase 2 of the country’s exit strategy which is meant to start on 18 May. The positive trend seen in Belgium’s case figures makes another easing of lockdown measures likely. Alexandra Brzozowski has more.

Fewer than 60 people in intensive care. With only 264 patients currently being treated in hospital for COVID-19 symptoms, of which 59 are in intensive care, the country’s infection rate appears to be slowing. Since the outbreak, of the 392,314 people tested, 15,903 were tested positive, while 592 people have died. (Philipp Grüll | EURACTIV.de)

COVID-19 committee. Independent TD Michael McNamara will head a new 19-member parliament committee tasked with scrutinising the government’s response to the coronavirus outbreak in the country. The committee – which met for the first time Tuesday (12 May) – will examine the government’s transparency of decision making with regards to COVID-19 measures, and will also look into the efficacy of its contact tracing and testing plans. (Samuel Stolton | EURACTIV.com)

For more about the Irish response to the coronavirus outbreak, check here.

Quickest shift to teleworking. Following the coronavirus outbreak across the EU, employees in Finland were the quickest to start working from home and switch to ‘teleworking’ as 60% made the switch this spring compared to a 37% EU average, according to a survey published yesterday (12 May) and carried out by the European Foundation for the Improvement of Living and Working Conditions (Eurofound). EURACTIV’s Pekka Vänttinen takes a closer look at Eurofound’s study.

Also, take a look at the latest measures taken to combat COVID-19 in Finland.

‘Unsustainable’ guidelines. Italian Workers’ Compensation Authority (INAIL) and the Italian Institute of Health released two guidelines with the safety measures required for reopening beaches and restaurants. However, representatives from both industries informed Economic Development Minister Stefano Patuanelli that the protocols were “unsustainable” and would cause “serious damage” to the sectors. Read more.

Changing EU recovery fund criteria. Portugal’s planning minister, Nelson de Souza, called on Tuesday (12 May) for the adjustment of the EU recovery fund’s distribution criteria, which aims to finance the sectors most affected by the COVID-19 health crisis. De Souza stressed that the economic crisis was severely hitting sectors such as tourism, as well as catering or aviation, but also exporting sectors, such as footwear and textiles. (Maria de Deus Rodrigues, Lusa.pt)

Ready to walk alone. Greece is expecting the Commission’s much-awaited recommendations on tourism this summer but if they are “light”, Athens is ready to go on its own way. “If it is [the proposal] light, Greece will push for specific measures through bilateral agreements with other countries, as has already been announced. It is very important to restore air travel,” Tourism minister Charis Theocharis told DW. The Commission has insisted that new tourism measures will have to be harmonised at EU level.

In late April, Greek government sources told EURACTIV that PM Kyriakos Mitsotakis had told his EU partners that the single market is not there only to serve free movement of goods but also the movement of people.

“We need to reach common understanding as to movement of people,” he said, adding that backing tourism in Europe’s south is “demonstrable” support. (Sarantis Michalopoulos | EURACTIV.com)

A war of letters. “At present, the fight against the epidemic consumes all my energy and strength,” wrote PM Viktor Orbán in response to European Parliament President David Sassoli’s letter inviting him to personally come to Brussels on Thursday (14 May) to take part in the debate on Budapest’s controversial coronavirus law. Justice Minister Judit Varga will represent the Hungarian government during the debate, Orbán confirmed. EURACTIV’s Vlagyiszlav Makszimov looks at the exchange between the two.

Fight against drought. The Czech Republic faces the worst drought in 500 years, shifting the  government’s, and public focus on the coronavirus pandemic.

On Tuesday (12 May), the country’s environment ministry proposed to amend a law so that all rainwater retention capacities have to be fitted to new buildings, a measure which could take effect from January 2021. “A drainage of rainwater to sewerage system would be possible only in such cases when there is no other solution of water management,” said Environment Minister Richard Brabec. (Aneta Zachová | EURACTIV.cz)

Central bank chief defends the ECB. The ECB is protecting the European project, not jeopardising it, the governor of the central bank of the Slovak Republic (NBS) and ECB Governing Council member, Peter Kažimír, told Reuters in an interview, commenting on the recent German constitutional court’s ruling on the Pandemic Emergency Purchase Programme, known as PEPP.

“The European Court of Justice has sole authority to decide on the ECB’s actions. This is the rule for us, our Bible,” Kažimír said, adding that “it’s important to stress that the European Central Bank is not the villain of Europe or Europeanism. On the contrary.” (Zuzana Gabrižová | EURACTIV.sk)

Lower taxes for the tourism industry. Value-added tax (VAT) for restaurants, catering and entertainment sector will be decreased from 20% to 9%, Prime Minister Boyko Borissov announced on Tuesday (12 May) following a meeting with sector representatives.

However, after the government announced on Tuesday morning that VAT on basic foodstuffs would also be reduced from the beginning of 2021, 40 minutes later, confusion reigned when it announced that the tax on food will remain at 20%. By the end of the day, Borissov had clarified that a reduced VAT rate for restaurants and hotels would take effect this year. In an attempt to minimise political damage, the PM even said he would also reduce VAT on books to 9%. (Krassen Nikolov | EURACTIV.bg)

For more on the health crisis situation in Bulgaria, read here.

In other news, the number of COVID-19 deaths in Romania surpassed 1,000 on Tuesday (12 May), after 20 new deaths were announced in the past 24 hours. Of the total 15,778 COVID-19 infections, 1,002 are now confirmed to have died. However, since the start of the outbreak in Romania more than two months ago, almost 7,700 patients had recovered. (EURACTIV.ro)

Make sure to check out the latest coronavirus-related updates for Romania, here.

Poorly disguised threat. Zagreb Mayor Milan Bandić announced that his parliamentary group will not support parliament’s dissolution, a crucial precondition for new elections, if parliament decides not to vote on the bill for Zagreb’s reconstruction following the 22 March earthquake. The law on the capital’s post-earthquake reconstruction should be adopted under the fast-track procedure, according to Bandić. EURACTIV Croatia’s Tea Trubić Macan takes a closer look.

More on Croatia’s response to both crises can be found here.

Prosecutor dismisses ‘coronavirus’ suit against president, ministers. Slovenia’s state prosecutor has rejected a complaint filed by a private lawyer against President Borut Pahor and two government ministers for allegedly endangering public health, the 24ur news website reported. The complaint said the three had appeared in public in a group larger than five persons during a visit to the southern border on 15 April, without mandatory face masks and without keeping social distance. Read more.

‘Election boycott is not the right way’. The European Parliament’s Standing Rapporteur for Serbia Vladimír Bilcík said on Tuesday (12 May) that boycotting democratic institutions and elections was not the way to change politics, noting that the EU would be monitoring the situation in Serbia before and after the upcoming elections. EURACTIV Serbia has the details.

In other news, spokesman for US special envoy for Kosovo Ambassador Richard Grenell, Dick Custin, had told Radio Free Europe that Russia is welcome to join in the Belgrade-Pristina dialogue to help achieve peace and stability. “Everyone who can contribute ideas to help stability, peace and the prosperity of Serbia and Kosovo is welcome,” RFE quoted the spokesman as saying.

Russian Ambassador to Serbia, Alexander Botsan-Kharchenko, had told Serbian daily newspaper Politika that Moscow could join in the dialogue if invited by Belgrade, adding that Russia will only agree to a solution that is acceptable to Serbia.