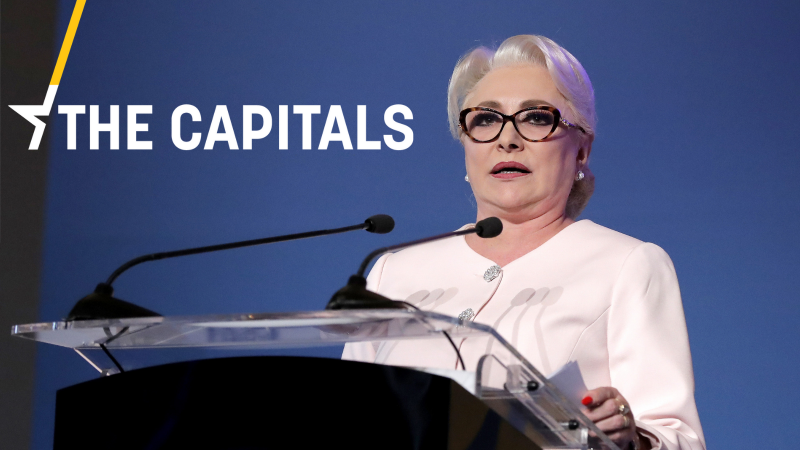 The Capitals is EURACTIV's daily newsletter from across Europe. [ROBERT GHEMENT/EPA]

A “dangerous” thing. Romanian PM Viorica Dăncilă said the Article 7 threat against her country is a “dangerous thing”.

In a letter signed by Commission VP Frans Timmermans, the EU executive warned the Romanian authorities about the possibility of triggering Article 7 of the EU treaties, the heaviest rule of law punishment that would potentially see a member state stripped of its Council voting rights.

Despite the fact that Timmermans is the lead candidate for the European socialists, the political family Romania’s ruling party belongs to, Dăncilă said she was disappointed with the letter as it was politically motivated.

“I’ll reply to Mr Timmermans and I will request that my country and the Romanian people get fair treatment and the respect the other European citizens get,” the PM said.

Growth returns. The German economy returned to growth in the first quarter following rising domestic demands and construction activity, Federal Statistics Office figures have showed. GDP rose 0.4% quarter-on-quarter, while year-on-year it grew a calendar-adjusted 0.7%. Both figures were in line with market expectations.

Yellow vest maths. Six months after the beginning of the Yellow vest movement in France, the economic consequences are still under review. The demonstrations have had a heavy impact on small businesses and cost around 0.2% of French growth (€4 billion) in the period 2018-2019, according to economy minister Bruno Le Maire.

But the movement has also had a positive side: emergency economic measures will redistribute €10 billion to households in 2019. This is a boost for purchasing power that will increase French growth rate by 0.3% of GDP, according to the French Economic Observatory (OFCE).

France Insoumise. A young regional adviser from Jean-Luc Mélenchon’s “La France Insoumise”party has called on French voters to choose the extreme-right Rassemblement national party during the EU elections. The young politician said Marine Le Pen’s party was “the only sovereign list that fights for France’s independence and is able to block Emmanuel Macron”. (EURACTIV.fr)

Sánchez’s Catalan candidate woes. Catalan separatist parties are set to veto in the regional parliament the leader of the Catalan Socialists (PSC), Miquel Iceta, as regional senator. That would prevent him from getting the presidency of Spain’s Senate, Spanish media reported.

Separatists accuse the Senate of giving its green light for the implementation of Article 155 of the Spanish Constitution, which allows the central government to temporarily suspend the competences of an autonomous government. It was applied following the unilateral and illegal declaration of independence of Catalonia in October 2017.

PM Sánchez said the separatists’ decision was “a veto to coexistence, understanding and dialogue.” (EuroEFE.EURACTIV.es)

Colourless debate. Socialist leader and former Belgian PM Elio Di Rupo and his liberal successor Charles Michel participated in a TV debate but the differences between them were only minor. Di Rupo insisted on a “progressive program” as Belgians have “suffered enough”. (Alexandra Brzozowski, EURACTIV.com)

Trouble for a centre-right MEP. Outgoing Forza Italia MEP Lara Comi is under investigation for alleged illegal financing. The Public Prosecutor accuses the Italian lawmaker of having received €31,000 from the president of Lombardy’s business association. Comi is currently running for a third mandate in the EU Parliament.

Hard job for the government. “It won’t be easy, but we will avoid the rise of the sales tax,” said Italy’s PM, Giuseppe Conte. Italy needs to find €23 billion to avoid unpopular VAT hikes. After Conte’s comment, right-wing Lega leader Matteo Salvini ruled out completely any possibility of a VAT increase. (Gerardo Fortuna, EURACTIV.com)

Tusk in Warsaw, again. EU Council boss Donald Tusk will participate in a march organised next weekend in Warsaw by the European Coalition, a major pro-EU opposition force. In the last weeks, Tusk has stepped up his engagements in Poland as he explores the options of returning to Polish politics after his Council stint expires at the end of the year. (EURACTIV.pl)

Fico still under protection. More than a year after his resignation, former Slovak PM Robert Fico still enjoys state-paid security, while the usual period for such protection is 90 days after leaving office. Asked why he still needs security, Fico replied: “Either there are reasons or there are not. Maybe you would prefer if someone killed me, and I am being serious here. I want to say that I am convinced that a million reasons remain for the cooperation with the Agency for the protection of constitutional officials to continue.”  (Zuzana Gabrižová, EURACTIV.sk)

Czechs in Court. The ECJ has launched hearings in the case of refugee relocation quotas against the Czech Republic, Poland and Hungary. The Commission referred the three countries to the court for non-compliance with their legal obligations on relocations. The three countries said they did not relocate asylum applicants due to security reasons and that the relocation mechanism didn’t work. (Aneta Zachová, EURACTIV.cz)

Tsipras relief measures. Greece’s major parties have backed the government’s relief measures (VAT cuts, low pensions’ increases etc) even though the country’s lenders have not officially reacted yet. The Bank of Greece Governor expressed concerns over Greece’s ability to achieve a 3.5% surplus this year, while the ministry of economy replied that his argument is groundless.

Support for Timmermans. Syriza MEP and EP vice-president Dimitris Papadimoulis has left the door open for the Greek government to support socialist Frans Timmermans for the Commission presidency. “We will support the most progressive candidate who can receive support from the Council and the vote of confidence of the European Parliament,” he said. (Sarantis Michalopoulos, EURACTIV.com)

Cyprus fumes at Brits. Cypriot president Nicos Anastasiades lashed out against British foreign office minister Alan Duncan, who cast doubts over Cyprus’ offshore economic rights. Duncan said Turkey’s bid to drill for gas off Cyprus shouldn’t proceed in areas “where sovereignty is under dispute”. On the other hand, the EU has warned Turkey about Nicosia’s rights to its Exclusive Economic Zone. (Theodore Karaoulanis, EURACTIV.GR)

EIB railway. The European Investment Bank (EIB) has granted Slovenia a €250 million loan for the construction of a railway line that is the largest logistics project in the country in the last decade. The management of the port of Koper, where the railway will extend to, also announced that it won German carmaker Daimler’s bid for the third time: Koper will remain the export port for Mercedes and other prestigious vehicles to the Middle East and Asia. (Željko Trkanjec, EURACTIV.hr)

3.5% growth. The National Bank of Serbia estimates this year’s GDP at 3.5% and expects it to increase to 4% in the coming years. Inflation is expected to remain low and stable in the next two years. The year-on-year growth of consumer prices in April was 3.1%. (Beta-EURACTIV.rs)