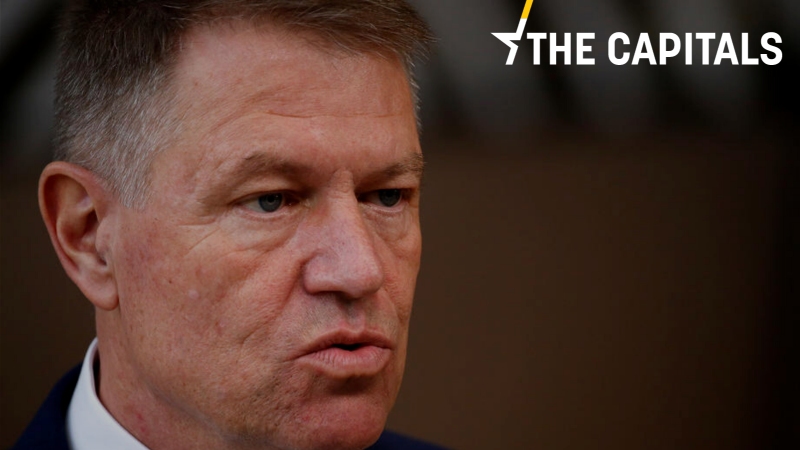 ***Before you start reading today’s edition of the Capitals, feel free to have a look at the op-ed “Press Freedom and Europe: Wolves, vultures, trolls… plus knights and journalists” written by Christophe Leclercq, who established Fondation EURACTIV and the EURACTIV media network.

In search of €7.5 billion. European leaders are backing an initiative from Brussels to raise €7.5 billion euros to find a vaccine to curb the global coronavirus pandemic via an online pledging conference due today (4 May). Read more.

This exchange took place after a draft bill to proclaim the autonomy of Szeklerland – a region in central Romania populated by ethnic Hungarians – was adopted by the Chamber of Deputies (lower house) in Bucharest, without being put to vote as a result of a procedure trick.  The draft bill was automatically passed as it had not been discussed for 45 days – because of the pandemic.

Iohannis accused his most powerful opponents, the Socialist Democratic Party (PSD), of conspiring with the Hungarian minority party UDMR, which supports Iohannis, “to give Transylvania to Hungary.” Bogdan Neagu reports from Bucharest.

Brutal attack fuels calls to protect journalists. Four crew members of the satirical news show “Heute Show” were hospitalised after being ambushed by 20 to 25 masked individuals after filming on Friday (1 May) at a so-called “hygiene demonstration” in Berlin, which protests the country’s coronavirus restrictions. Although some of the attackers had reportedly used metal rods, all hospitalised crew members have been discharged and are recovering well. EURACTIV Germany’s Sarah Lawton looks into what happened next.

No quarantine for EU, Schengen area citizens. France said on Sunday that it would not quarantine anyone arriving from the EU, the Schengen area or Britain due to the coronavirus, as it prepares to start easing confinement measures after two months of lockdown, AFP reported.

German government says no to Austrian tourists. After Austria’s conservative Tourism Minister Elisabeth Köstinger (ÖVP) had announced plans to reach a bilateral agreement with Germany to allow tourists to cross the border, the German government voiced some concerns. Germany’s Interior Minister Horst Seehofer (CSU) said that “as long as the virus does not go on vacation, we will also have to limit our travel plans.” Border controls with neighbouring countries, including with Austria, are set to be prolonged, his ministry added.(Philipp Grüll | EURACTIV.de)

More on how Austria has been handling the virus outbreak, here.

Preparedness for a second wave. Belgium is set to start moving out of its lockdown in three phases as of today, but experts are already preparing for a possible second wave. Alexandra Brzozowski has the details.

€100 for everyone? Education Minister and Left Alliance Chairperson, Li Andersson, has proposed a €100 handout for all citizens to kickstart the economy following the coronavirus health crisis as part of the 1 May rallies, which traditionally serve as a platform for political initiatives, promises and grand gestures from all parties. EURACTIV’s Pekka Vänttinen has the details.

A staggered return to work. Firms will be encouraged to stagger employees’ working hours as part of the phase-out of the coronavirus lockdown, Transport Minister Grant Shapps has said. Benjamin Fox reports from London.

Six million free masks. Spanish Prime Minister Pedro Sánchez announced on Saturday (2 May) that face coverings will be mandatory in public transport starting Monday (4 May), adding that the government will distribute six million free masks to promote compliance with the new rule. “We know that the absolute confinement could not continue forever,” the socialist PM explained. EURACTIV’s partner EFE reported.

Meanwhile, on Saturday (2 May), health officials reported 276 fatalities, 1,147 new cases and 2,572 hospital discharges, continuing the downward trend of the contagion in Spain, which has been one of the worst affected countries in the world. This brought the total number of deaths to 25,100, with 216,582 confirmed infections and 117,248 recoveries, according to figures released by the health ministry.

Read more about the COVID-19 situation in Spain, here.

No more lockdown. Portugal begins to ease lockdown measures today (4 May) after the Portuguese cabinet approved on Thursday (30 April) a plan for transitioning from the state of emergency that ended on Saturday to a ‘state of calamity’.

While small shops and hairdressers are allowed to reopen and face masks in shops and on public transport have now become mandatory, the country has so far recorded 25,282 positive coronavirus cases and 1,043 related deaths. (Lusa.pt)

(Un)clear ideas. After having experienced Europe’s longest total lockdown, Italy starts gradually lifting restrictive measures in the midst of a great deal of uncertainty, as allowed and forbidden activities in the so-called ‘phase two’ are not yet clear to the citizenship. Gerardo Fortuna has the full story.

Greece aims to reach EU average in ICU beds. The health ministry aims to have 1,200 beds in intensive care units, Health Minister Vassilis Kikilias said in an interview with Kathimerini newspaper.  “Our strategy is to reach, for the first time as a country, the European average in ICU beds, which is 12 beds per 10,000 citizens.” Read more on Athens-Macedonian News Agency.

Economy may open faster than anticipated. It is highly likely that Slovakia’s economy will open up faster than originally anticipated, said Prime Minister Igor Matovič (OĽaNO) as the country recorded only one new case of COVID-19 on Saturday (2 May) compared to four cases the day before (1 May), with seven patients now in intensive care and one on ventilator support.

While the decision will be made on Monday (4 May), it is expected that businesses, with the exception of large shopping centres, could open as early as 6 May. Strict hygienic measures will continue to apply, including limiting the number of persons allowed in the shops at a time and 2-metre social distancing in queues, etc.  (Zuzana Gabrižová | EURACTIV.sk)

50,000 want a credit timeout. More than 50,000 people and companies have applied for a  suspension of loan payments citing the impact of the COVID-19 crisis. The possibility of a six-month suspension of loan servicing was introduced ten days ago. The governor of the Bulgarian National Bank Dimitar Radev said, in a TV interview, that the number of those who wanted a vacation for their bank loans was about to rise.

Meanwhile, Bulgarian authorities lifted some restrictions imposed under the country’s state of emergency, which ends on 13 May. While restaurants and cafes can open their gardens later this week under certain circumstances, individual sports are allowed outdoors and checkpoints at city exits will no longer be in place. Bulgaria recorded a total of 1,618 confirmed COVID-19 and 73 deaths (two of them doctors) with 316 patients in hospitals, including 39 in intensive care. (Krassen Nikolov | EURACTIV.bg)

No new infections as reopening starts. For the first time since early March, no new infections were recorded in Slovenia on Saturday (2 May), according to government data. The total number of infections confirmed so far thus remains at 1,439.

From today (4 May), many activities are restarting, from open-air restaurant gardens to shops of under 400 square metres. After a long time, hairdressers, photographers, jewellers, tailors, shoemakers and similar activities will reopen, while churches will also begin public worship. (Zoran Radosavljevic | EURACTIV.com)

More details about the situation in Slovenia can be found here.

For the homeland ready. Since Friday (1 May), the salute ”for the Homeland ready” has become quite the debated topic between Christian Democrats (HDZ) and Socialdemocrats provoked by president Zoran Milanovic who had left the 25th anniversary of Operation Flash in Okucani after two men in T-shirts displaying the Croatian Defence Force (HOS)’s coat of arms made a salute used by the pro-Nazi Ustasha regime during World War II. EURACTIV Croatia’s Karla Junicic takes a closer look.

More threats against the media and journalists. The Regional Platform for Advocating Media Freedom and Journalists’ Safety said it registered an increase in various forms of pressure and threats targeting media and journalists across the Western Balkans, especially in Serbia and Bosnia and Herzegovina. EURACTIV Serbia reports.