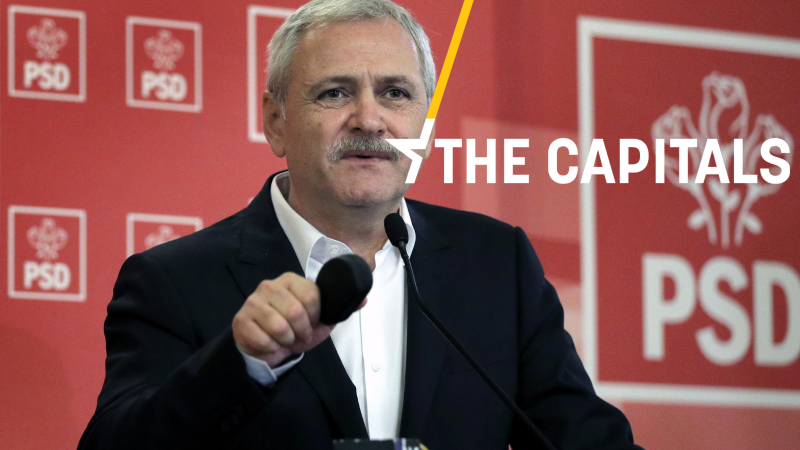 Liviu Dragnea, the controversial leader of Romania’s ruling socialist party, sees no danger in the creation of a far-right alliance following a Salvini-led nationalists’ gathering last Saturday in Milan.

“What I saw is a group of parties that support an increased role of their countries compared to the EU institutions,” Dragnea said.

“Some EU leaders need to understand the cause and EU citizens should think if heavily-paid EU bureaucrats are really working for them or the institution,” he added.

Dragnea dodged the question of whether his PSD party could join the far right alliance if the relationship with the Party of European Socialists (PES) worsens. PES has frozen its relations with PSD over rule of law concerns and a decision on PSD’s membership of the grouping is expected at a congress in June. (Bogdan Neagu, EURACTIV.ro)

“He abandoned the socialist party, then he attempted a comeback and now he joins the European Conservatives and Reformists (ECR),” the source said.

In an interview with EURACTIV on 3 April, Ponta said he would campaign for socialist Spitzenkandidat Frans Timmermans in Romania. (Sarantis Michalopoulos, EURACTIV.com)

Read more on the issue:

Motion of non-confidence. Austrian Chancellor Sebastian Kurz will face a motion of non-confidence in parliament on Monday, lawmaker Peter Pilz has said.“I am quite certain that it will succeed and that I will manage to ensure that Kurz will no longer be the chancellor on Tuesday,” Pilz told Reuters. The far-right Freedom Party (FPÖ) has said it would back the motion. (Claire Stam, EURACTIV.de)

Low turnout a major concern. Eurosceptic Nicolas Dupont-Aignan (Debout La France-ECR) on Tuesday urged French voters to participate in the upcoming EU elections with the admonition that “it is contradictory to demonstrate in the rain throughout the year, and then not vote”. President Emmanuel Macron has also called on people ed to vote and even the radical left ‘Le Media’ channel has produced a special pro-vote show.

According to polls, Marine Le Pen’s National Rally will get 23.5% of the vote followed by Macron’s LREM 23% and the centre-right Les Republicains with 12.5%. Dupont Aignan stands at 4.5%, the radical left and the greens at 8%, while the socialists are set to elect no MEPs with 4%. (EURACTIV.fr)

“I promise, because the law requires it from me, to be loyal to the democratic mandate of 1 October and the Catalan people,” several members of the Republican Left of Catalonia (ERC) said when swearing on the Constitution. (EuroEFE.EURACTIV.es)

Scandal hits Belgium’s N-VA. The recording of a conversation held in 2016 between the president of the conservative New Flemish Alliance (N-VA), Antwerp mayor Bart De Wever and the Secretary of State for Asylum and Migration at the time, Theo Francken, is causing a storm ahead of the EU elections.

A journalist infiltrated the working meeting and published an article at the time, but the recordings were made public on Tuesday (21 May) and picked up both by the Dutch and French-language press. In the recording, De Wever makes arrangements with Francken to organise raids on immigrants according to the schedule of departing repatriation charter planes. Since December Belgium has had a caretaker government, after N-VA left the coalition, over their opposition to the UN Global Migration Pact. N-VA is expected to be the big winner of the Federal elections in Belgium, held simultaneously with the EU elections. (Georgi Gotev, EURACTIV.com) [More]

The name’s bond, green bond. The Netherlands became the first of the eleven triple-A credit rated countries to issue a green bond, saying it would prioritise funds that can prove their environmental credentials. Initially expected to raise up to €6 billion, bankers said order books have already eclipsed €20 billion. Belgium, France, Ireland and Poland have all launched similar bonds already.

It’s a tourist trap! Dutch authorities will scale back tourism promotion, as the tulip fields, windmills and city centres of the Netherlands struggle to cope with record numbers of visitors. A new study says tourists should be encouraged to go to less popular parts of the country and at different times of the year. (Sam Morgan, EURACTIV.com)

“We would like them to have the power to reject legislative initiatives of the European Commission,” he said, proposing a “red card mechanism” of the sort once championed by ex-UK prime minister David Cameron. (EURACTIV.pl)

Ruling SMER top the spending charts. According to Transparency International Slovakia (TIS), the ruling socialist SMER-SD party has been running the largest, most expensive and least transparent EU elections’ campaign. Spending over €654.000, SMER-SD spent almost as much as the opposition OĽaNO party (ECR) and progressive coalition PS + SPOLU (ALDE/EPP) together.

Overall, TIS believes these EU election campaigns are the most transparent in history, as transparent bank accounts have been made mandatory for the first time. (Lucia Yar, EURACTIV.sk)

Protests vs justice minister. Thousands of people took to the streets of Prague on 21 May to protest against the appointment of lawyer Marie Benešová as the new justice minister. Benešová is considered a close ally of President Miloš Zeman.

No EU discussion, again. The EU election debate in Greece has focused once again on national issues. Leftist Greek PM Alexis Tsipras considers the EU elections “a vote of confidence” for his government while conservative main opposition New Democracy (EPP) leader Kyriakos Mitsotakis has laid out his party’s priorities as Greece’s new government. New Democracy still leads the polls but the gap between the two parties ranges from 8.5% to 4.9%.

New drillings. Cyprus will conduct eight new oil and gas drillings within its Exclusive Economic Zone over the next two years, energy minister Yorgos Lakkotropis has said. Tensions between Ankara and Nicosia have escalated lately as Turkey questions the sovereignty rights of Cyprus, who the EU and US fully back.

More diaspora voters. Minister of administration Lovro Kuščević has said almost 3.8 million citizens will be able to vote in the EU elections, of which 154,358 voters are from the diaspora, a three fold increase from the 2014 elections. Only 13 citizens from other EU countries wish to vote in Croatia, EURACTIV’s partner Jutarnji list reported.

Prioritising plastic recycling. Environment and energy minister Tomislav Ćorić has said the recycling of plastic and other materials is a priority. 20% of Croatia’s GDP is generated by tourism and the country can only compete with its rivals if it has a healthy and clean environment, Ćorić said, recalling that more than 37% of Croatia’s land territory is covered by the NATURA 2000 programme.  (Željko Trkanjec, EURACTIV.hr)

Slower growth in 2019. The Organization for Economic Co-operation and Development (OECD) has estimated that the Slovenian economy will grow by 3.4% this year, a slight drop from its previous 3.6% projection. It also estimates that next year’s GDP growth will be 3.1% and not 2.7% as previously projected. (Željko Trkanjec, EURACTIV.hr)

Serbia to buy gold. The governor of the National Bank of Serbia has said that the treasury contains 20.8 tons of gold and that officials are thinking about purchasing more. Since 2012, the central bank has bought close to seven tons of gold. Governor Jorgovanka Tabaković also said forex reserves were at an all-time high of €11.5 billion. (Beta-EURACTIV.rs)