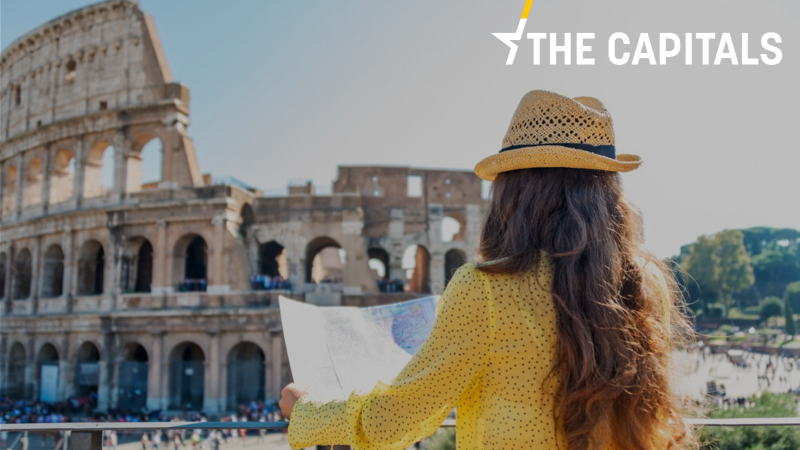 Di Maio: "If we don't change direction soon, there will be serious consequences for the tourism sector in all European countries". [Shutterstock/Alliance Images]

Before you start reading today’s edition of the Capitals, feel free to have a look at the article “New capital markets union strategy to take central role in EU recovery” by Jorge Valero.

We would also like to remind you that everyone at EURACTIV is keen to continue delivering top-quality content that covers the EU in a clear and unbiased way, despite being heavily impacted by the current crisis. As we, at EURACTIV, firmly believe that our readers should not have to access content via a paywall, we are asking you to consider making a contribution and thank all of you who already have. If you are interested in making a one-time or recurring donation, all you need to do is follow this link.

Now that many European countries have started lifting lockdown measures and opening borders, make sure you stay up to date with EURACTIV’s comprehensive overview, which is regularly updated with the help of our network of offices and media partners. Also, check our country update pages, such as the one for Croatia or Finland.

ROME. “From 3 June, we will be able to travel among the Italian regions and we are ready to welcome safely European citizens who want to spend their holidays in our country, as is the case each year. Our structures are ready”, Italy’s Foreign Affairs Minister Luigi Di Maio said during a video conference with counterparts from 10 countries.

Di Maio also said there should be no “blacklists” among European countries.

“If we don’t change direction soon, there will be serious consequences for the tourism sector in all European countries,” the minister said, adding that “bilateral agreements on tourist flows are against the EU’s spirit”. Italy will provide all countries with a weekly report on the situation of each region, Di Maio added.

The European Commission recently presented its recommendations on holidays this summer, emphasising the need for harmonised rules and against discriminating EU citizens because of the COVID-19 pandemic. Germany also opposes bilateral deals that could trigger a “tourism war” and pushes for an overall solution.

On the other hand, it seems that countries that dealt with the pandemic relatively successfully compared to others are eyeing separate deals.

€500 billion Franco-German COVID-19 recovery plan. Yesterday evening (18 May), French President Emmanuel Macron and German Chancellor Angela Merkel laid out their coronavirus recovery initiative, which seeks to bring Europe out of the crisis “united and in solidarity” by ensuring most of the funding to the hardest-hit countries and sectors.

The two leaders want to help the EU through the crisis and “enhance the resilience, convergence, and competitiveness of the European economies.” For more details about the proposal, read the latest from EURACTIV Germany’s Sarah Lawton and Christina Goßner.

Also, feel free to check out our regularly updated COVID-19 country pages for both France and Germany.

Reopening of borders. Belgium’s foreign affairs minister Philippe Goffin (MR) met with his French, Dutch, German and Luxembourg counterparts in recent days to consider the gradual lifting of restrictions on the 1,385km common border with the four countries. Alexandra Brzozowski has the details.

Experimental reopening of schools starts. The first 350,000 of around 700,000 children who have been doing online classes for weeks went back to school on Monday (18 May). Social distancing can thus be maintained and pupils must wear masks at all times.

Education Minister Heinz Fassmann (ÖVP) has said that this is a test-run for when the school year starts in autumn. Schools should then reopen fully unless Austria is hit by a second COVID-19 wave and has to go back into lockdown. If that turns out to be the case, the currently tested approach could allow schools to stay open. (Philipp Grüll | EURACTIV.de)

For more on Austria’s lifting of lockdown measures, read here.

President Niinistö calls for EU unity. The EU might lose its international stature and even face a near existential crisis if it fails to address and solve its internal problems, Finnish President Sauli Niinistö wrote in an article published in various domestic newspapers on Saturday (16 May). EURACTIV’s Pekka Vänttinen takes a closer look at the president’s article.

Bill curbing EU migration moves closer. The UK is moving closer to legally ending freedom of movement after UK lawmakers gave their first green light for the country’s new Immigration Bill by 351 votes to 252 on Monday (18 May). The bill, which was shelved before last December’s election, gives EU citizens the same rights to live and work in the UK as immigrants from outside the bloc.

The bill focuses on attracting ‘high skilled’ workers to the UK, imposing requirements for applicants, including a job offer from an approved employer, with a salary threshold of £25,600. (Benjamin Fox | EURACTIV.com)

First phase of lifting restrictions. Ireland has embarked on the first stage in the lifting of COVID-19 restrictions, with businesses reopening around the country. Garden centres, electrical shops, farmers’ markets, opticians, hearing centres, golf courses and a selection of sports facilities are free to open their doors once again, albeit with strict social distancing guidelines in place.

70% of Spaniards benefit from eased lockdown measures. On Monday (18 May), around 32 million people in Spain, roughly 70% of the country’s population, awoke to eased coronavirus lockdown restrictions after having to respect strict lockdown measures since 14 March.

While the majority of Spain has progressed into ‘phase one’ of the government’s so-called “transition to new normality”, Madrid and Barcelona – the two worst-affected areas – and a patchwork of provinces in Castile and Leon, remain in preliminary phase zero. A few small Spanish islands, with a total population of 45,000, have already progressed to phase two of the four-stage de-escalation process. EURACTIV’s partner EFE reports.

In other news, Tourism in Spain could restart by the end of June, by which time the government hopes to have lifted all travel restrictions, Transport Minister José Luis Ábalos said on Monday, adding that it would depend on how successful the de-escalation turns out to be. Last year, Spain was the world’s second-most visited country with a total of 83.7 million tourists. Almost 2.5 million jobs revolved around the industry. (EuroEFE.EURACTIV.es)

14-day quarantine for passengers arriving from abroad extended to end of May. The mandatory 14-day self-quarantine rule on international flight arrivals, first imposed on 16 March, is extended to the end of May, the Civil Aviation Authority said on Monday. Read more on Athens-Macedonian News Agency.

Phase four begins. After ten weeks on lockdown, Slovakia’s kindergartens and grammar schools (Grades 1-5) will reopen on 1 June under strict hygienic measures. However, parents can decide whether their child will return to school in June or not. EURACTIV Slovakia’s Zuzana Gabrižová looks into what else phase four has in store.

Polish airlines LOT will take off again on 1 June. In the beginning, they will cover eight domestic routes, as Poland’s borders are still closed. New security rules will be applied (wearing masks throughout the entire flight included) (Łukasz Gadzała | EURACTIV.pl)

Parliament dissolved. Croatia’s 151-seat parliament ended its last session on Monday (18 May) as the majority voted for its dissolution with 105 in favour, eight against and four abstentions. It is now up to President Zoran Milanović to determine the date of the parliamentary election for the tenth parliament, or Sabor, since Croatia gained independence in 1991. EURACTIV Croatia’s Karla Junicic digs deeper.

Slovenia to launch two satellites in June. Slovenian satellites Trisat and Nemo HD will fly into space on 19 June, Vesolje-SI, the Slovenian Centre of Excellence for Space Sciences, where Nemo HD was produced, confirmed to STA news agency. Preparations for the launch, which has been postponed several times, will begin next week. Zoran Radosavljević has more.

Spraying against COVID-19. The national headquarters for fighting COVID-19 warned on Tuesday that spraying chemical substances to fight the pandemic is useless, if not outright dangerous. Local authorities in various parts of the country have initiated spraying by trucks and even from airplanes, sometimes targeted at Roma ghettos. The national headquarters also slammed the practice by local authorities to shut down entire Roma ghettos instead of ensuring confinement of houses and families. (Georgi Gotev)

Central bank pushes cash. Romania’s central bank greatly increased its cash injections in April and the first half of May to increase liquidity on the banking market, governor Mugur Isarescu has said. The central bank’s main objective in the coming period is to keep high liquidity that will help finance both the government’s expenditure and the real economy while keeping a stable currency and gradually lowering market interest rates. Isarescu also said that the bank will closely follow the health crisis and measures to contain the pandemic and adapt its decisions accordingly. (EURACTIV.ro)

You can find more about the COVID-19 situation in Romania, by clicking here.

Elections could be sidelined if coronavirus-related problems occur. Serbian President Aleksandar Vučić said on Monday that “the election will no longer be the top issue” if there were more problems related to the coronavirus and the number of infected persons rose. EURACTIV Serbia has the story.

In other news, Serbia has not yet decided whether to continue the EU accession process under a new methodology because its European partners are yet to explain clearly what the new methodology entails, the Serbian minister in charge of the country’s accession to the EU, Jadranka Joksimović, told Radio Free Europe (RFE) in an interview.

“Serbia is not against the new methodology, but we need to know first how Serbia’s progress so far will be valued. We want to know if the country is opening nearly all of the clusters at once since some chapters have been opened in almost all of them,” Joksimović added. Read more.