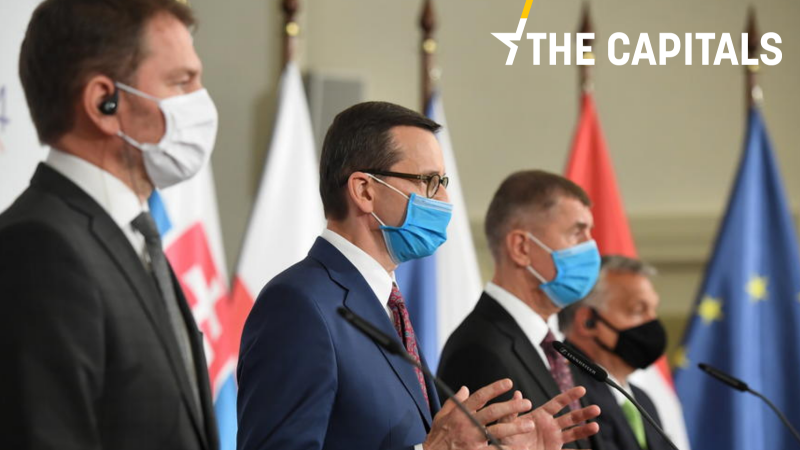 Before you start reading today’s edition of the Capitals, feel free to have a look at our network article Abortion rights: An open wound in many European countries.

Also fee free to have a look at the piece How young people in Belarus have become the drivers of the protests, by Alexandra Brzozowski.

Row over rule of law infects EU virus summit. EU member states had planned to share the lessons learned in the first year of the pandemic and discuss a strategy to prevent a third wave of infections in the first months of 2021. Leaders were also expected to take the temperature of post-Brexit trade talks, with time fast running out to strike a deal with Britain before it leaves the single market on 1 January. Read more.

Hungary and Poland were backed by Slovenian political ally Janez Janša on Wednesday in opposing plans to tie EU funds to rule of law criteria. At the same time, their Visegrad 4 partners, Czech Republic and Slovakia, have criticised the vetoes. Read more.

Thousands of German COVID sceptics protest amended infection law. While amendments to the Infection Protection Act proposed by Germany’s grand coalition of conservative CDU/CSU and socialist SPD were adopted on Wednesday, thousands of coronavirus sceptics protested outside the Bundestag and got into confrontations with police. Read more.

France far from lifting current COVID-19 restrictions. “We are not at all at the stage of deconfinement. We are actually far from it,” government spokesperson Gabriel Attal said at the end of the Council of Ministers on Wednesday, noting, however, that the measures could be adapted “around 1 December”.

While Prime Minister Jean Castex will be meeting with the leaders of political parties and groups to take stock of the situation as of Friday, President Emmanuel Macron is expected to speak during the course of next week. (Louise Rozès Moscovenko | EURACTIV.FR)

Walloon and Brussels extend curfew until mid-December. The Brussels regional government confirmed that the curfew will not be lifted on Thursday and will instead be extended until 13 December. However, health experts are puzzled that infection rates are declining less quickly than expected. Read more.

Austria records over 100 COVID-19-related deaths within 24 hours. Austria’s coronavirus daily death tally stood at three figures for the first time since the start of the pandemic as 109 people of the 2,000 total death tally died from the virus between Tuesday and Wednesday, according to the country’s health and interior ministries.

Austria went into a second ‘hard lockdown’ on Wednesday as the rate of new infections had started to rise again compared to Tuesday after a short slowdown. (Philipp Grüll | EURACTIV.de)

Post-Brexit UK to unveil biggest defence budget hike in 30 years, despite pandemic. Prime Minister Boris Johnson will announce on Thursday the biggest increase in British defence spending since the end of the Cold War. It comes in the same week that the UK moves closer to a crunch decision on its future relations with the EU and member states scramble to consolidate European defence initiatives. Read the full story here.

Facebook preps for WhatsApp fine at Dublin HQ. Facebook has put aside €77.5 million in anticipation of an upcoming fine for data protection violations on its subsidiary WhatsApp, recently filed accounts at the social media giant’s European headquarters in Dublin reveal. Read more.

EU’s sustainable finance taxonomy alarms Finnish industry and business. The leaked European Commission proposal on Sustainable Finance Taxonomy is worrying and infuriating for industries and businesses in Finland and across the Nordics. Read more.

Italy’s Conte calls for maximum attention. “The current system, based on 21 parameters to divide the regions into categories, is working. It allows us to make precise interventions to limit the infection,” said Prime Minister Giuseppe Conte, adding that maximum attention is still needed despite a slowly receding infection curve. Read more.

Portugal sets up taskforce to prepare COVID-19 vaccine distribution. Lisbon has set up a task force to come up with a COVID-19 vaccination strategy and hopes to be prepared to start distributing shots as early as January, Health Minister Marta Temido said on Thursday. Read more.

With or without vaccine, 15,000 Greeks will die from coronavirus. Based on the mortality rate of the COVID-19, which reaches 0.15% in Greece, up to 15,000 people will lose their lives “with or without a vaccine”, Professor of Pharmacology Dimitris Kouvelas told Greek journal Ethnos.gr. Read more.

Polish police keep protesters against abortion ruling away from parliament. Poles who planned to blockade parliament to protest against a judicial ruling that amounted to a near-total ban on abortion were kept away from the building by police on Wednesday, and dispersed around the city centre. Read more.

Slovakia to address its toxic substance legacy. Slovakia’s environment ministry wants to tackle the environmental burden in the form of hundreds of hazardous waste sites that threaten the health of the population. Many of those contaminations date back to the period of industrialisation during communism and lie at properties of factories privatised in the 1990s.

However, as only 310 of such sites contaminated by hazardous substances are officially confirmed and not classified, the country’s environment ministry has promised legislative changes that will make them all public and make it easier to demand costs of liquidation.(Zuzana Gabrižová | EURACTIV.sk)

Bulgarian PM accused Skopje of lobbying and pressuring Sofia. The authorities in Skopje believed that with pressure and lobbying they could make Bulgaria change its position on the decision to open EU membership negotiations with North Macedonia, Bulgarian Prime Minister Boyko Borissov said on Wednesday. Read more.

Croatia confident it will have concrete results on missing persons. Croatian Veterans Minister Tomo Medved said in Vukovar, the site of a brutal Serb siege in 1991, that he was confident Croatia will have concrete results on persons who went missing in the 1991-95 Homeland War soon. Croatia is still looking for 1,869 persons who disappeared during the war.

It is important that information on the location of graves is exchanged with Serbia, said Medved. State secretary Stjepan Sučić visited Serbia and “talked with Serbia’s highest officials who are… in charge of tracing missing persons and they agreed on strong steps forward concerning the exchange of information”, the minister added. (Željko Trkanjec | EURACTIV.hr)

The third budget revision. The Romanian government discussed on Wednesday the third budget revision of the year, which estimates a wider deficit. Thus, the budget deficit is now seen at 9.1% of GDP, up from 8.6% of GDP before, as the economic contraction is seen bigger than before. Romania’s GDP is now expected to fall by 4.2%, compared with a contraction of just 2.8% forecast a few months ago.

State aid for Romanian energy producer. The government adopted state aid worth some 270 million euros for the restructuring of energy holding Oltenia (CEO). The aid would be disbursed over the next five years and it was prenotified to the European Commission. CEO is Romania’s second-largest power producer and it mainly uses coal for energy generation. The five-year plan aims for the restructuring and decarbonization of the company which covers about one-fifth of Romania’s energy. (Bogdan Neagu | EURACTIV.ro)

Jansa’s backing of Hungary and Poland’s rule of law veto is ‘his opinion’. The agreement between the budget and rule of law agreed between European Parliament and Council needs to be respected, Slovenian President Borut Pahor said in response to Prime Minister Janez Janša’s letter to EU leaders on Wednesday, in which he backed Poland and Hungary’s opposition. Read more.

Hollywood star DiCaprio urges Sarajevo to protect its rivers. Hollywood star and environmentalist Leonardo DiCaprio has once again urged the authorities in Bosnia- Herzegovina to take a step further towards protecting its rivers from hydropower development, pointing out Albania as an example in the region of how important concrete actions are, N1.ba reported. (Željko Trkanjec | EURACTIV.hr)