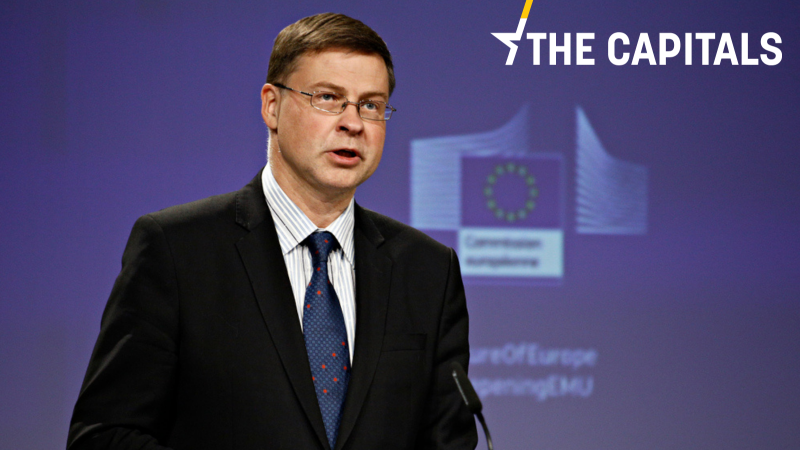 While McGuinness is the standout favourite to take the position, there are some that question her profile in tackling the EU's broad trade portfolio. [Shutterstock/Alexandros Michailidis]

Before you start reading today’s edition of the Capitals, feel free to have a look at the article “EU pharma boss says ‘not possible’ to predict COVID-19 vaccine date“, by Sarantis Michalopoulos.

Indirect threats to Nord Stream 2. Over the weekend, German Foreign Minister Heiko Maas (SPD) indirectly threatened to halt construction of the Nord Stream 2 pipeline in response to the poisoning of Russian opposition leader Alexei Navalny. “I hope the Russians will not force us to change our position on Nord Stream 2,” Maas told the newspaper, Bild am Sonntag.

However, he also warned of the cost of such a move and that any proponents must “be aware of the consequences.” Halting construction on the project could leave the country open to damages claims from the companies involved. He also suggested that limiting the response to Nord Stream 2 would not match the severity of the crime committed against Navalny. More here.

PARIS
State Council backs right to make masks compulsory. In two decisions issued on Sunday evening (6 September), the French institution responsible for the respect of the Constitution authorised prefects to issue decrees to make mask-wearing obligatory in areas with a high risk of Covid-19. The State Council decision effectively endorses decisions made by the departements of Strasbourg and Lyon. It excludes physical or sporting activities and sparsely populated areas. (Anne Damiani, EURACTIV.FR).
///

25% of the population have a ‘migration background’. One in four people in Austria has a so-called ‘migration background,’ meaning that either they themselves or one of their parents had migrated to the country, according to initial data from the Austrian government’s integration report. Over the past decade, this figure saw an increase of about 35%.

The report also shows a difficult labour market situation, likely due to the coronavirus. Integration Minister Susanne Raab (ÖVP) pointed to continued challenges for the country on the integration front, stating that “a rocky road lies ahead.” (Sarah Lawton | EURACTIV.de)

BRUSSELS
Fewer COVID-19 press conferences. Belgium’s crisis centre’s press conferences will be reduced from three to one a week, Yves Stevens of the National Crisis Centre told Belga news agency, as the coronavirus figures have become stable over the past few weeks.
An average of 435.6 people per day tested positive during the past week, according to the latest figures from Sciensano. The trend of new infections per day increased by 3% over the 7-day period from 27 August to 2 September, compared to the preceding week. “We continue to communicate the figures on a daily basis, but the interpretation that is currently given three times a week at a press conference will henceforth only take place once a week – on Wednesdays,” he said. (Alexandra Brzozowski, EURACTV.com)
///

The never-ending saga of Finland’s Olkiluoto nuclear plant. Energy company Teollisuuden Voima (TVO) announced on Friday (4 September) that regular electricity production from its Olkiluoto nuclear plant – which is currently under construction – will not start in March 2021 as planned, but a year later, in February 2022. Find out more.

Frost ups the ante. The UK’s chief negotiator on a post-Brexit trade deal on Sunday (6 September) upped the ante ahead of crunch talks, warning that Boris Johnson’s government was not “scared” of walking away from talks without a deal to govern trade from 2021.

A COVID-19 vaccine by the end of 2020? The so-called ‘Oxford vaccine’ developed by Astrazeneca could be distributed by the end of 2020 if everything goes according to plan, Italy’s Health Minsiter Roberto Speranza has said. Read more.

Greeks rely on Austria, France in growing row with Ankara. Paris and Vienna have so far been the only EU member states who have openly backed Greece in its escalating dispute with Turkey.

Austrian Foreign Minister Alexander Schallenberg said yesterday (6 September) that his country would “continue to speak quite clearly when Turkey violates international law, human rights, media freedom and the rule of law, or uses refugees and migrants as a means of pressure.” Read more.

Human chain for university autonomy. Thousands took part in a human chain that stretched from Budapest’s University of Theatre and Film Arts – currently under a student blockade – to the parliament building, protesting against what many see as an attempt to curtail the institution’s academic freedom. More.

Meanwhile, the number of active COVID-19 cases reached an all-time high after several daily records of new cases, with currently 3,811 active registered infections, compared to the previous peak of 2,054 at the beginning of May. (Vlagyiszlav Makszimov | EURACTIV.com)

WARSAW
Government reshuffle in autumn. Talks began on the composition, shape and program of the new reshuffled government last week, with the next meetings planned for Monday and a new government planned for late September or early October.
It is likely that the agreement will not only concern the shape of the new government, but also a legislative work plan for the rest of the term. According to Polish daily Rzeczpospolita, the package of ten program slogans includes changes in the judiciary and further reconstruction of the Supreme Court, media and changes in the election law. (Alexandra Brzozowski, EURACTV.com)
///
PRAGUE

The embassy called on the Czech Republic to observe the one China policy. Foreign Minister Tomáš Petříček (S&D) replied that the Czech government, not the Speaker of the Senate, is in charge of foreign policy. According to Petříček, Czech policy towards China remains the same, regardless of Vystrčil’s trip to Taiwan. (Aneta Zachová | EURACTIV.cz)

More COVID-19 protests. Hundreds of people rallied in Zagreb’s main square at 5pm on Saturday (5 September) for the Freedom Festival protest against the country’s COVID-19 measures, claiming they restricted human rights. Protesters carried banners which read: “Take off the mask, turn off the TV, Covid is a lie.” EURACTIV Croatia’s Karla Junicic takes a closer look.

Vucic, Hoti and Trump sign agreement to normalise economic relations. During a meeting hosted by the White House in Washington, Serbian President Aleksandar Vučić and Kosovo’s Prime Minister Avdullah Hoti signed an agreement with US President Donald Trump on normalising economic relations between the two countries. EURACTIV Serbia looks at how the leaders reacted to the agreement.

In other news, Serbian President Aleksandar Vučić said in Brussels yesterday (6 September) that he had had a good meeting with EU special envoy to the Belgrade-Pristina dialogue, Miroslav Lajčak, and US Deputy Assistant Secretary of State Matthew Palmer. The president also stressed that he believed the talks in Brussels would produce results. EURACTIV Serbia reports from Belgrade.