Speaking to euractiv.com, Russia’s Ambassador to the EU, Vladimir Chizhov, criticised the European Commission’s handling of the crises in Macedonia and Kosovo, and regretted the “hysteria” over alleged Russian interference in Montenegro.

Speaking about the political crisis in Macedonia, Chizhov criticised the Commission’s support for a government which would be put in place in exchange for accepting the so-called “Albanian platform”.

On 1 March, Macedonia’s President Gjorge Ivanov refused to allow a coalition of Social Democrats and parties representing the country’s big ethnic Albanian minority to form a government because of their pledge to allow wider official use of the Albanian language.

“When I read statements by high officials of the EU, including Council President Donald Tusk himself, mentioning outside interference in Macedonia, I take it as an expression of self-criticism on his part. When Commissioner Hahn is addressing the Macedonian president, telling him he should not interfere in the constitutional process of his country – I ask, ‘Isn’t the president the head of state and the guarantor of the constitution?'”

Good signal to Western Balkans: Unequivocal support for European perspective. Aware of inside, outside forces trying to destabilise region.

Chizov made reference to the Ohrid agreement of 13 August 2001 between the government of Macedonia and ethnic Albanian representatives which put an end to the conflict between the ethnic Albanian ‘National Liberation Army’ and Macedonian security forces. The agreement included provisions for altering the official languages of the country, with any language spoken by over 20% of the population becoming co-official with the Macedonian language on a municipal level.

The Rusian diplomat said that Albanian parties were “summoned to Tirana, to the office of the Albanian prime minister”, and “signed what is now referred to as the Albanian platform, which would expand the rights of the Albanian minority to a level on par with what in other countries is part of a federal structure”.

“The leader of the opposition Zoran Zaev accepted this platform, which is contrary to the Macedonian constitution. The EU neglected all this, saying (that) this coalition has 67 seats out of 120, so he should be prime minister and let the process go in that direction. Which of course President Ivanov could not accept. The EU should have played a more positive role, rather than a detrimental one,” Chizhov said.

Chizov said that the situation regarding the Belgrade-Pristina dialogue has started to worry the EU, not only Russia. “But I believe that’s a result of the biased approach of the EU,” he added.

He made reference to the bridge over the river Ibar in the town of Mitrovica which has become a symbol of the divisions between Albanians on the south side and Serbs in the north. Following the North Kosovo crisis, in 2013, the Serb-majority municipality of North Mitrovica was created, dividing the city into two administrative units, both operating within Kosovo’s legal framework.

“When the story of the so-called amphitheatre in Mitrovica unfolded [the local Serbs built a concrete structure in the form of an amphitheatre to prevent vehicles from crossing the bridge], and Pristina went ballistic, demanding it should be removed. The EU intervened, and they made the Serbs agree that they would demolish the amphitheatre and that in exchange the Kosovars would remove their special forces from the southern end of that bridge. But what about the obligation of Pristina to create an assembly of Serb municipalities? Not only the Kosovars but also the EU is not referring to it anymore,” the diplomat stated.

Since the 16 October election, when 20 people were arrested for planning to carry out a coup d’état, tensions have built up in the small Western Balkan country.

According to the British press, quoting Whitehall sources, the coup to attack Montenegro’s parliament and kill pro-Western leader was directed by Russian intelligence officers with the support and blessing of Moscow to sabotage the country’s plan to join NATO.

“Regrettably, in Montenegro an anti-Russian hysteria is taking place, supported by the US and by some EU member states. The so-called coup attempt allegation has never been substantiated, and even less the alleged Russian link,” he said.

Asked about the names of two Russian citizens been named by the special prosecutor in charge of investigating the coup attempt, Chizhov said:

“But who are they? Has somebody seen them?” He added: “This is not serious. Yes, we are against Montenegro’s NATO accession. We consider it detrimental to the effort of enhancing security of Europe. This is an attempt to respond to security challenges of the 21st century by the means of the mid-20th century.”

He added that regarding Montenegro’s EU accession Russia had no objections.

“You want into the EU? Here is one more headache for the EU,” he said. 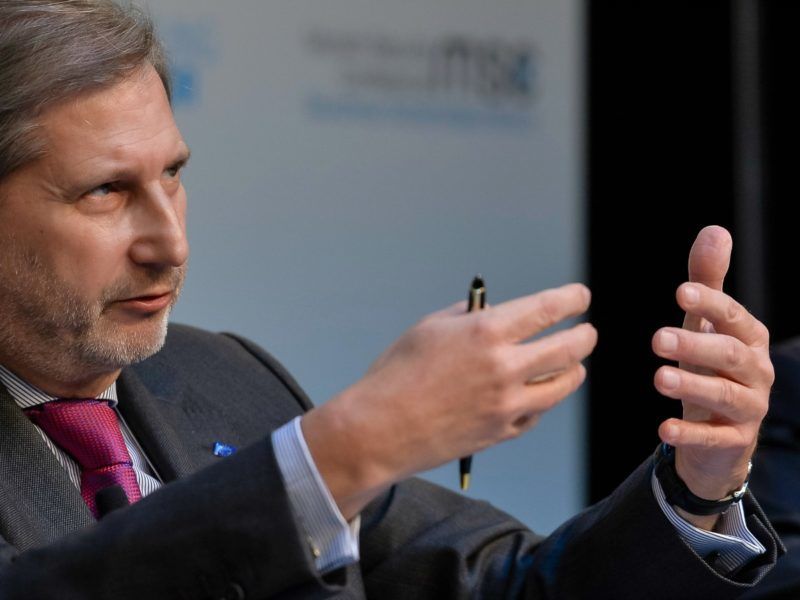 In an exclusive interview against the background of stalemate in Montenegro, Neighbourhood Commissioner Johannes Hahn told EURACTIV.com that he trusts the country’s political leaders will find a way to compromise, and that he hoped to meet them soon.

3 responses to “Russia: Commission should play a more positive role in the Western Balkans”