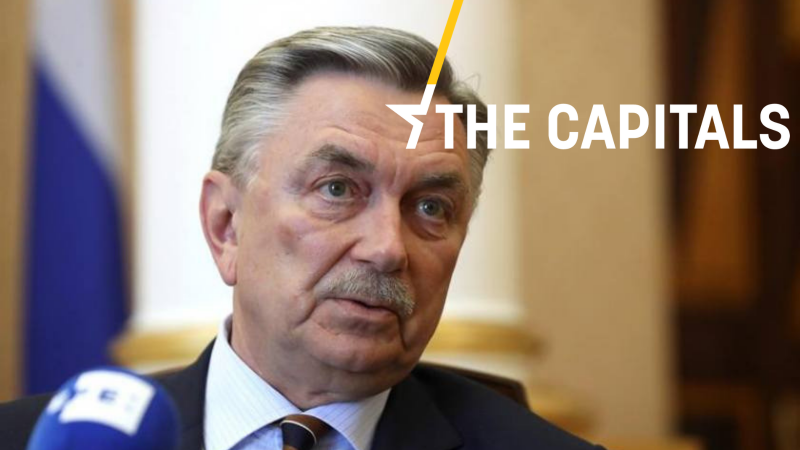 Today, Europe celebrates for the first time World Food Safety Day. Before reading The Capitals, take a look at an op-ed written by Bernhard Url, the executive director of the European Food Safety Authority (EFSA), based in Parma.

>>EU should celebrate but not remain complacent about food safety

In an interview with EURACTIV’s partner EFE on the eve of the International Economic Forum in Saint Petersburg (the “Russian Davos”), Russian ambassador to Spain Yuri Korchagin said Moscow is not behind rising Euroscepticism.

“We want a united, prosperous, predictable and stable Europe. Therefore, we are not interested in any type of conflict or unpredictability in our neighbourhood. Eurosceptic trends have their origin in the society of their countries,” the Russian diplomat said.

He added that sometimes it is said that in Russia there is fake news.

“But what I read, even in the Spanish press, are 90% things that make a Russian laugh, or fear, because if they think this way, maybe they don’t understand anything. If we make the wrong decision that all Euroscepticism is fed by Russia, then they will never solve that problem,” the diplomat said.

Korchagin added that Moscow hopes that the new heads of the EU Commission and Parliament will be “more objective” in the bloc’s relations with Russia and wished that the EU’s “coercive measures” against Moscow following the Crimea annexation will be revoked soon.

Speaking on the sidelines of the Three Seas Initiative in Slovenia, former US General James L. Jones said the EU borders between the Baltic and the Black Sea should be strengthened.

“There begins the defence of Europe, the threats need to be taken seriously and jointly respond to them,” he said, adding that the US administration strongly supports strategic co-operation and is willing to invest several billion dollars in investments in the region.

“Our second meeting in such a short period of time is a clear signal of the new dynamics in our bilateral relations, which are based on deep historical, cultural and spiritual ties,” Radev said.

Radev also told TASS in an interview that it is important to develop economic cooperation with Russia despite sanctions and counter-sanctions. He added that the completion of the Belene project was inevitable.

Slovak PM Peter Pellegrini also met with Putin. He said he appreciated the “good and open” cooperation with Russia in trade, energy and education. According to Putin, Slovakia is one of Russia’s major partners, citing “traditionally reliable and friendly” relations.

Pellegrini invited Putin to the 75th-anniversary celebrations of the Slovak National Uprising in Banská Bystrica in August. The same invitation has already been sent to US President Donald Trump. Slovak diplomacy chief Miroslav Lajčák confirmed that Slovakia is ready to host a bilateral meeting of the two presidents if “there would be such need”.

In the meantime, Croatia’s Security and Intelligence Agency (SOA) published last week a report, suggesting the potential risks of terrorism for Croatia as a member of NATO.

The agency warned that Croatia was the target of a series of Advanced Persistent Threat (APT) cyber-attacks. “Considering the fact that Croatia will chair the Council of the EU next year, the SIA believes that the risk of increased frequency in APT is growing.”

Coalition chaos 2.0? Belgium cannot experience another long-term period without a federal government as was the case during the 541 days in 2010-11, coordinators Didier Reynders and Johan Vande Lanotte said, after the Belgian King extended their negotiation mission until 17 June.

“It is important that we hold discussions to form a government quickly,” Reynders said, highlighting a “degrading economic situation” due to looming Brexit and Belgium’s needs to agree on a national budget. A possible timeframe for the new government to be in place in autumn. (Alexandra Brzozowski, EURACTIV.com)

Brexiteer defeat. Nigel Farage’s Brexit party suffered a surprise setback on Thursday when Labour held on to the marginal seat of Peterborough in a by-election. Most analysts had expected the Brexit party to build on its momentum from the European elections, but it was beaten into second place, with the Conservatives third. Farage left the count by a back-door shortly before the result was announced. (Ben Fox, EURACTIV.com)

Peace in Rome. Following a “useful, positive and cordial” meeting in Rome, Italy’s two deputy PMs Matteo Salvini and Luigi Di Maio wrote in a joint statement the “the government must go on”.

It was the first meeting between the leaders of the two ruling parties in two months. However, differences are still there, particularly on the deficit issue: Five Star and Italian PM Giuseppe Conte want to stick to the rules, while Lega has no qualms in breaching them. (Gerardo Fortuna, EURACTIV.com)

Recommendations for Poland. The EU Commission has recommended Poland increase the retirement age, which has recently been lowered to 65 for men and 60 for women. At the same time, Brussels warned Warsaw that it should make sure that pensioners do not fall into the poverty trap. Last but not least, the EU executive said it should boost market participation, which is low despite low unemployment rates.  (EURACTIV.pl)

GDP growth confirmed. Romania’s economy rose 5% in the first quarter, provisional data showed on Thursday, confirming the first estimate published last month. Most economic sectors grew in the first three months compared to the same period in 2018, but the growth was mainly fueled by retail, the IT industry and services, the statistics institute INS said.

Pro-EU pact. PSD, the ruling socialist party in Romania, wants to sign the pro-EU pact proposed by President Klaus Iohannis, but it also wants some more things to be included, according to PM Viorica Dancila.

While the pact proposed by Iohannis only referred to the justice system, incorporating the results of the anti-corruption referendum, PSD wants to add issues related to a multi-speed EU, dual quality standards, differences between legislation in various EU member states and how to strengthen Romania’s position in the EU. (EURACTIV.ro)

>>Read also: Ciolos: Romanian PSD government can only be trusted after it resigns

Waiting for the 2nd EC audit report. Ahead of the second EU Commission draft audit report on alleged EU subsidy fraud, the Czech State Agricultural Intervention Fund (SZIF) will stop paying out subsidised projects of companies linked to PM Andrej Babis and Agriculture Minister Miroslav Toman. The first report, which also pointed out that Babis had a conflict of interests, has already caused a huge upset among Czechs.

Methamphetamine paradise. Nine out of ten (264 out of 298) methamphetamine labs the police uncovered in the EU in 2017 were located in the Czech Republic, says the European Report on Drugs. These are mostly small labs operated by local users and dealers. (Ondřej Plevák, EURACTIV.cz)

Rape and new penal code. After almost 70 years, the Greek House has approved a new penal code with the public debate focusing on rape’s definition and punishment.

The initial bill raised heavy criticism from NGOs and lawmakers on the issue but ultimately tthe Greek justice minister submitted an amendment clarifying that rape is a sexual act without consent – not necessarily linked to violence – and that it still remains a felony.

Amnesty International hailed the vote saying it’s a victory for women. Greece became the ninth out of 31 European countries to recognise that sex without consent is rape.

46+12 provocations. The Turkish Air Force on Wednesday violated Greece’s national airspace 46 times. In addition, Turkish F-16s committed 12 air traffic law infringements of the Athens FIR. A top US State Department official said Washington was making every effort to de-escalate the tensions among Cyprus, Greece and Turkey in the region.

Moreover, following a meeting Cypriot President and US Deputy Assistant Secretary of State Matthew Palmer, a government spokesman said the US expected Turkey to refrain from illegal actions in waters where Cyprus has exclusive economic rights. (Theodore Karaoulanis, EURACTIV.gr)

It is an initiative launched by the Polish and Croatian presidents, Andrzej Duda and Kolinda Grabar-Kitarović, and welcomed by US president Donald Trump. He sent Secretary for Energy Rick Perry to the meeting, recommending Europe rely on the US for energy.

Perry said Slovenia had the potential to be an excellent small market for small modular reactors (Slovenia hosts the Krško Nuclear Power Plant, which Croatia co-owns), which he said are the future of nuclear energy. He said spreading the use of nuclear energy was the only way to reach common climate change goals. (Željko Trkanjec, EURACTIV.hr)

Serbia to sign deal with EAEU on 1 October. The trade ministers of Serbia and the Eurasian Economic Union (EAEU) agreed on 6 June in Saint Petersburg that a free trade agreement between Serbia and the EAEU would be signed on 1 October in Sochi. The EAEU consists of Russia, Belarus, Kazakhstan, Armenia and Kyrgyzstan. Serbia can strike foreign trade deals  by itself until it becomes a full member of the EU, after which those agreements will no longer be valid.

Vucic dismisses media freedom criticism. Serbian President Aleksandar Vucic has dismissed the latest findings of the US Freedom House NGO on the deteriorating media freedom in Serbia saying this is “nothing new”. The government of Viktor Orbán in Hungary and the Vucic administration “have had great success in snuffing out critical journalism, blazing a trail for populist forces elsewhere,” the report said. (Beta-EURACTIV.rs)

2 responses to “Russian diplomat: Moscow does not feed Euroscepticism”