Salvini and Berlusconi to fight for Orban’s eyes 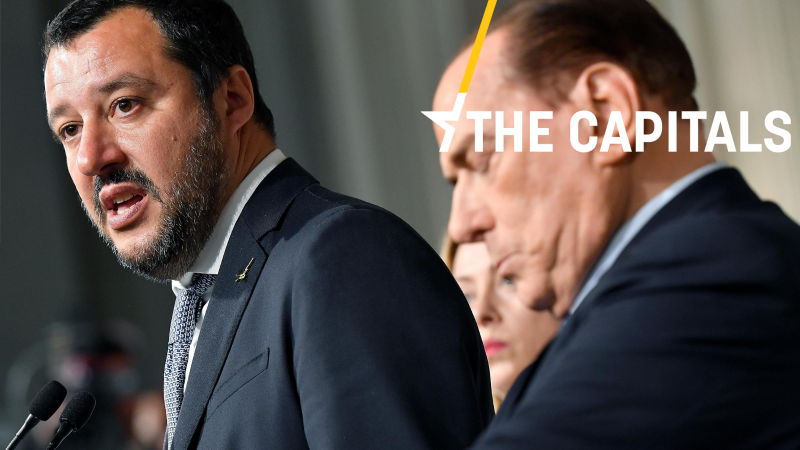 The Capitals is EURACTIV's daily newsletter from across Europe. [EPA/ETTORE FERRARI]

The far-right Europe of Nations and Freedom (ENF) won only 58 seats in the EU elections, but Lega is willing to open the doors to Hungary’s Fidesz, currently in the EPP, as well as Nigel Farage’s Brexit Party, Germany’s Alternative fur Deutschland, Spain’s Vox and the Dutch Forum voor Democratie.

But Salvini is not alone in competing for Orbán’s affections.

“I’m sure I can convince Orbán to stay in the EPP and other EPP members to keep his party in,” said Silvio Berlusconi, who is also close to Orbán. (Gerardo Fortuna, EURACTIV.com)

Meanwhile, in Paris, the French centre-right is trying to handle the electoral disaster. Following the unexpected bad result of the EU elections, centre-right Les Républicains is facing the biggest crisis of its history.  The party was expected to get around 15% of the French vote, but ultimately got just 8.5%, the worst result in its history.

President of Les Républicains, Laurent Wauquiez has called for a rally of right and centre forces in France. Despite admitting that he was partly responsible for the “historic defeat”, he has refused to resign.

There is a similar situation in Zagreb, where the centre-right has started the blame game after it got just 4 seats in the EU Parliament. Andrej Plenković, Croatian PM and chief of HDZ (EPP), the biggest Croatian party, said some HDZ members did not help the EU election campaign. “I did not see Mr. (Milijan) Brkić in this campaign, he did not contribute to it at all,” he said.

Brkić, HDZ vice president and deputy Speaker of the Croatian House, retorted, “I said everything at the party Presidency meeting. I never intend to reply through the media to anyone in the world”. (Željko Trkanjec, EURACTIV.hr)

She said yesterday she stood by Weber for president of the European Commission, but, speaking after a summit dinner in Brussels, the German leader confirmed that some of her colleagues had backed other candidates and that the search for compromise would continue. (Claire Stam / EURACTIV.de, AFP)

The Palace under pressure. Belgian King Phillipe continued his second day of meetings with party leaders ahead of government formation talks. Meanwhile, the pressure on the Palace is rising to also receive the extreme-right Flemish separatist Vlaams Belang party, which came second in the elections. The delayed decision, in any case, represents a subtle political statement, as critics point out that the King would lose his neutrality if he did not do so. (Alexandra Brzozowski, EURACTIV.com)

Up to the socialist affiliates. The supporters of the Spanish socialist party (PSOE) will have the last say on the party’s post-election political alliances in town halls, autonomous communities and the Government of Spain, EURACTIV’s partner EFE reported on Tuesday.

Spain’s PM Pedro Sánchez and his party have admitted that its leftists incline towards agreements with left-wing Unidas Podemos rather than centrist Ciudadanos (Citizens), despite the fact that several governments depend on the centrist party. Last Sunday, PSOE triumphed in the EU, local and autonomous elections. However in some cases, because it does not have a majority to govern, due to pacts and alliances between Citizens and the conservatives of Partido Popular (EPP). (EuroEFE.EURACTIV.es)

Match-fixing. Around a dozen arrests were made in Spain on Tuesday as part of a probe into an alleged match-fixing network in Spanish soccer. Among those detained are the former Real Madrid and Spanish national team player Raúl Bravo, suspected of being the ringleader of the criminal association, El Pais reported.

F35 in Poland? Mariusz Blaszczak, Polish defence minister, tweeted that Poland “sent a request for quotation (LOR) to American partners regarding the purchase of 32 F-35A aircraft along with a logistics and training package”. The move is in line with the US Pentagon’s earlier statements to sell aircrafts to European allies and with the White House’s approach to transatlantic relations.

Government changes. Eight ministers or deputy ministers were elected as MEPs on Sunday, forcing a government reshuffle. Among them is Beata Szydlo, former Prime Minister and now a deputy Prime Minister, and Joachim Brudzinski, minister of interior and administration and Jarosław Kaczyński’s right hand. The changes are expected in the next couple of weeks. (EURACTIV.pl)

According to other reports, Šefčovič is eyeing Federica Mogherini’s foreign policy top post. Public broadcaster Czech Radio informed that  Polish Prime Minister Mateusz Morawiecki confirmed that V4 is considering the nomination of Šefčovič to an EU top job but it is not clear which one. (EURACTIV.sk, Aneta Zachová,EURACTIV.cz)

Reinforcing EU Council. Czech president Miloš Zeman supports the idea of a fundamental reform of the EU institutions. He believes that decision-making power should be transferred to the European Council. (Aneta Zachová, EURACTIV.cz)

Climate landmark. Amid the manoeuvring in Brussels, the Dutch senate backed a bill that will drastically increase the climate action ambitions of the Netherlands. After a court ruled that Dutch efforts to curb carbon emissions were insufficient, the government went back to the drawing board. The new act targets 49% cuts by 2030, 95% cuts by 2040 and full carbon-neutrality by 2050 but at this stage, the goals are only political and, as such, not legally enforceable. 62 of the 75-strong chamber voted in favour of the act. (Sam Morgan, EURACTIV.com)

Socialist clearing.PSD, the ruling socialist party, is trying to recover after its strong-man leader Liviu Dragnea was sent to jail for corruption charges. Prime Minister Viorica Dancila took over the party leadership and has already started eliminating some of Dragnea’s close allies.

The ruling socialist party suffered heavy losses in the EU elections while its judicial reforms were rejected in a separate referendum, pushed forward by President Klaus Iohannis, also held on Sunday.

PSD introduced changes to judicial and criminal legislation that drew the ire of Romania’s partners, including the European Commission, and led to the largest protests in the country since the anti-Communist revolution 30 years ago. (EURACTIV.ro)

BSP leader resigns. Kornelia Ninova, leader of the opposition Bulgarian Socialist Party (BSP), resigned on Tuesday. The move follows the BSP defeat at the European elections, which lost to Boyko Borissov’s GERB by 24% to 31%. She will continue as interim leader until 16 June, when BSP will hold a congress and elect a new leadership. The Bulgarian press reports that Ninova still hopes to win the BSP election, in which for the first time all party members will vote. (Georgi Gotev, EURACTIV.com)

Controversial media mogul gives up MEP seat: Delyan Peevski, the controversial media mogul who was elected as MEP on the list of DPS, the Movements of Rights and Freedoms, announced that he would not take his seat. Peevski was elected as he is number 2 on the list of DPS list (ALDE-affiliated). His defection from the European Parliament will certainly be a big relief for ALDE. [More]

One more seat for conservatives. Centre-right New Democracy party (EPP) won another seat in the next EU House (in total 8), as Yanis Varoufaki’s DieM25 did not ultimately manage to pass the 3% threshold.  (Theodore Karaoulanis, EURACTIV.gr)

Serbian troops on alert. Special units of the Kosovo police entered on 28 May the Serb-populated north of Kosovo, in an operation said to target organised crime.

Serbian President Aleksandar Vučić said the objective was not to fight crime, but rather an intention to intimidate and criminalise the local Serb population. Vučić made it clear that the Serbian Armed Forces would protect the people and that he had already ordered that all units be placed on alert. (Beta-EURACTIV.rs)