Sánchez and Torra step up war of words on Catalonia 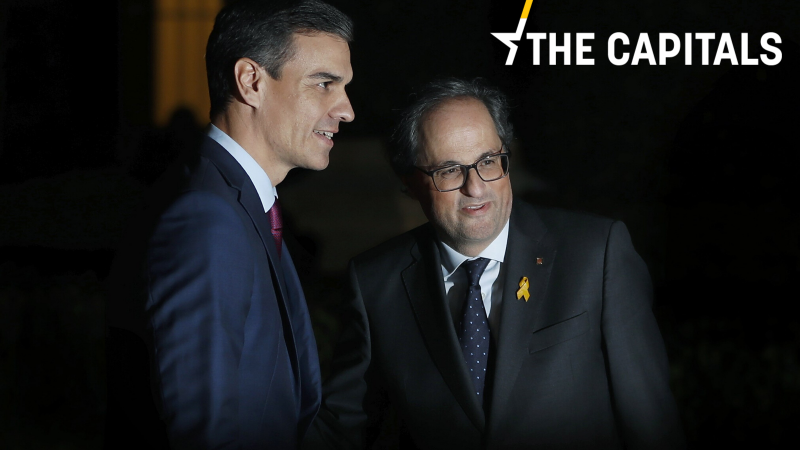 "Whoever crosses the border of law will confront the serene and firm response of the democratic State", acting socialist PM Pedro Sánchez said.

“Whoever crosses the border of law will confront the serene and firm response of the democratic State”, Sánchez said.

Violent protests in response to the 14 October ruling that sentenced nine Catalan pro-independence politicians and separatists to between nine to thirteen years in jail for their role in the banned 2017 independence referendum continued in Catalonia over the weekend. Over 182 injuries were recorded over the weekend.

The situation in big cities like Barcelona, the Catalan capital, and Girona, was calm, but tense, on Wednesday.

As the bitter exchanges between Madrid and Barcelona showed no sign of easing, Torra said on Wednesday that Sánchez is “neglecting his duties” with regards to Catalonia, and should ‘start thinking about future generations, not about upcoming elections’.

Torra has accused Sánchez of not answering his phone calls since the weekend. Fernando Heller (EUROEFE.EURACTIV.es)

Breton for the Berlaymont?  The President Emmanuel Macron is considering Thierry Breton, the head of technology group Atos and former finance minister under Jacques Chirac’s government, as the new French candidate for the European Commission after MEPs rejected Sylvie Goulard. However, the names of Michel Barnier, the EU chief Brexit negotiator and secretary of State for European affairs, Amélie de Montchalin are still on the table. (EURACTIV.FR)

AKK unveils Syria plan: Federal Defence Minister Annegret Kramp-Karrenbauer (CDU) is seeking a mandate from the UN Security Council to establish a security zone in northern Syria, an initiative she proposed on Monday (21 October). Such a mission should “ideally” be conjointly led by the UN, the minister said on Wednesday during a visit to a military base in Erfurt.

Kramp-Karrenbauer said the UN-led Minusma mission in the West African state of Mali, in which the Bundeswehr is also involved, could serve as a model. She added that it would depend on which task the Bundeswehr (German military) could take on in order to concretise the future configuration of a mission in Northern Syria. The aim of such a protection zone could be to “separate enemies” and stabilise the region “so that the inhabitants can return again”. Besides, the fight against the Islamist militia IS, which has currently come to a standstill, must be continued, she insisted.

The minister defended the decision to submit her Syria proposal without having consulted her coalition partner SPD or her allies in NATO. “It was important to me that the debate gets going,” she said. (Claire Stam | EURACTIV.de)

Read more on this story: US welcomes German security plan for Syria, unlikely to take part.

After Brexit, election deadlock: Both major parties are divided on whether to back a general election before Christmas, as Prime Minister Boris Johnson waits for EU leaders to decide on whether to give the UK a new Brexit extension.

After UK lawmakers backed Johnson’s deal in principle but blocked his plans to ram it through Parliament in two days without legal or economic impact assessments, Johnson and Labour leader Jeremy Corbyn failed on Wednesday (23 October) to agree on a new timetable for the Brexit Withdrawal Bill that must pass to formalise the UK’s exit from the EU. Johnson wants an election, but many in his party would rather focus on passing the bill. Corbyn has mooted the prospect of an election once a lengthy extension to prevent a no deal Brexit has been agreed, but many of his party still demand a new referendum. (Benjamin Fox, EURACTIV.com)

So Salvini? In a closed-door hearing before the parliamentary committee for intelligence, Italy’s PM Giuseppe Conte described the two meetings between Italy’s spy chief Gennaro Vecchione and US Attorney General William Barr as “legal and correct”. In August, Barr asked Italy’s help in the inquiry over a possible tie between President Donald Trump and Russia in the 2016 US elections.

Right-wing opposition party Lega hinted that Conte authorised the secret meeting in exchange for Trump’s support during Italy’s government crisis. But Conte fired back saying that, unlike him, Salvini has not yet clarified his connections with Russian authorities and secret services. (Gerardo Fortuna | EURACTIV.com)

No VAT for new buildings – and easier payment for ‘golden visas’: PM Kyriakos Mitsotakis announced on Wednesday (23 October) a three-year suspension of VAT payments on any new building permits, including unsold properties built after 1 January 2006, meaning that all new buildings will be cheaper by 24%. Greece’s real estate market is recovering – prices rose by 7.7% in the second quarter of 2019 – and the government says that VAT exemption will boost growth in the construction activity.

Meanwhile, the government tabled a parliamentary amendment to a new investment law that will ease the so-called golden visa programme for non-EU citizens by accepting investments through POS payments as well as wire bank transfers.

Brexit letter. Daniel Kawczynski, a British Conservative MP and leading Brexiteer, had promised to use his influence to persuade the Polish government to veto any new Brexit extension. But his letter to Polish PM Mateusz Morawiecki had been flatly rejected by the government, which stated that a no-deal Brexit was “not in Poland’s interest”.

End of fur farming. Slovakia has banned fur farming, after a campaign in which more than 75,000 citizens signed a petition asking the parliament to do so. Under the new provision of the veterinary care law, the breeding or killing of animals for the purpose of obtaining fur will be banned from January 2021.

The fur business is not substantial in Slovakia, and there is only one farm that specialises in furs of minks. Much more common is rabbit farming, which has been exempted under the law provided their fur is used within the family of the breeder. In the EU, at least nine other countries have such measures in place, while others are in the process of adopting similar measures. (Zuzana Gabrižová | EURACTIV.sk)

Farmers afraid of MERCOSUR: The Agricultural Association of the Czech Republic and other farmers organisations are concerned that the EU’s MERCOSUR trade deal with South American states could have a negative impact on European trade, and lead to “double standards”. According to the association, that is because it does not reflect the welfare of animals or pesticides regulations.

The Association has asked the Agricultural Ministry to provide an impact assessment of the EU-Mercosur deal.

No EU funding for a motorway: The Struma motorway will not be receiving European funding for its completion on the grounds that the project violates EU law by passing through protected territories.

According to a letter sent to the Bulgarian authorities, the route approved by the ecological assessment two years ago is not identical to the one for which the European funds were received. This means that the project cannot be financed by any European funds and, if implemented, Bulgaria risks being slapped with an infringement procedure under the Habitats Directive. (dnevnik.bg)

Ponta says No: Ludovic Orban has failed to persuade former prime minister Victor Ponta to support his government, putting in danger the plans to get the Parliament’s green light for a new government next week. Ponta, a former leader of the PSD socialist party and prime minister until 2015, said the MPs of his Pro Romania party would not vote for the new government. Orban, the leader of the centre-right PNL and the prime minister, tried to minimise the effect of Ponta’s rejection, saying he had no great expectations, but he doesn’t understand why the Pro Romania leader made this decision. Ponta was a key ally in the vote of no-confidence against the PSD government two weeks ago, but he said he would prefer to unite leftist forces, including the socialists, in a new coalition government. (EURACTIV.ro)

Package of tax laws: The Slovenian parliament has adopted a package of tax laws, including tax relief that will cut personal income tax and increase levies on capital – including interest, dividends and profits- from 25 to 27.5%. The Radical left party Levica opposed the laws but radical right Slovenian National Party (SNS) supported the minority government’s measures. (Željko Trkanjec | EURACTIV.hr)

Avramopoulos backs Croatia to join Schengen: Outgoing EU Migration and Home Affairs Commissioner Dimitris Avramopoulos has said that the EU could face migration and security challenges better if Croatia were to join the Schengen Area. Avramopoulos added that when it first joined the EU, Croatia had met all its assumed responsibilities, which are now relevant for joining the EU’s passport-free area of travel. The Commissioner also expressed hope that member states would make the right steps to enable Croatia to join the Schengen Area soon. Neighbouring Slovenia has been blocking progress on the issue.

Avramopoulos stressed that Croatia must continue all current activities designed to protect the border, which, he said, included a high level of border control, particularly on the border with Bosnia and Herzegovina (BiH).

The arrival of the centre-right EPP party for a meeting in the Croatian Parliament on 19 November, has caused consternation among opposition lawmakers.

“The fact that this Parliament has leased its Grand Chamber, the place of legislative authority and political pluralism, for a meeting of a European political party, the EPP, is unacceptable and a step in the completely wrong direction,” said MP Vesna Pusić of the opposition Civic Liberal Alliance.

A day’s rent for the Grand Chamber, where Parliament holds plenary sessions, costs €5,000.

The EPP’s election convention, where Donald Tusk is expected to be elected as Party President, will be held at the Arena sports hall in Zagreb on 20-21 November.

Political solution on Kosovo is Serbia’s national priority. Serbian Foreign Minister Ivica Dačić said at a meeting of the Non-Aligned Movement in Baku on Wednesday (23 October) that reaching a political solution for Kosovo was Serbia’s national priority and again called on the countries that had recognized Kosovo to reconsider their decision. He thanked all the states who did not recognize Kosovo’s independence and said that over the past two years, “respecting Serbia’s argumentation”. A total of 15 states have withdrawn their decision to recognise Kosovo. (EURACTIV.rs)

Mirko Šarović, Minister of Foreign Trade and Economic Relations, submitted to the Council of Ministers of BiH an initiative to accept the so-called ‘Mini Schengen’, a joint declaration for the promotion of the regional economic space, which enables the full and free movement of people, goods, capital and services throughout the region. Serbia, Albania and North Macedonia launched the initiative last week. (Željko Trkanjec | EURACTIV.hr)