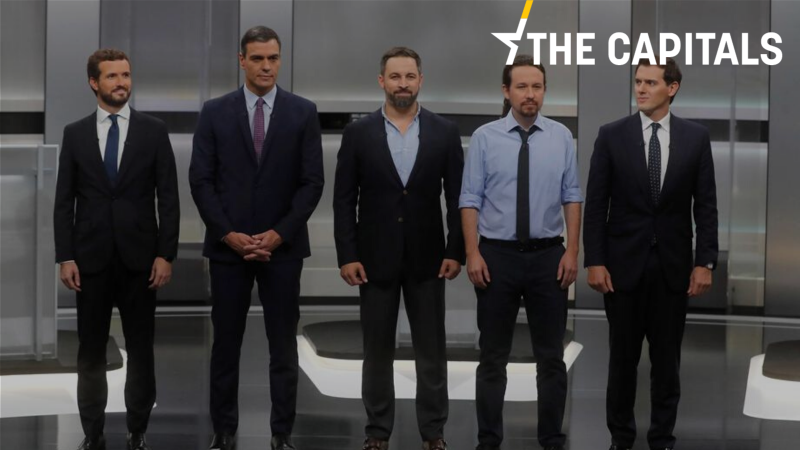 All parties keep their cards secret on how to unlock the situation after 10 November, if PSOE, which leads the polls, won’t ultimately reach the necessary majority (176 seats), as many surveys predict. [EPA/Juan Carlos Hidalgo]

Before you start reading today’s edition of the Capitals, feel free to have a look at yesterday’s Brief “Are Orban’s days numbered in Tusk’s EPP?“, as well as “Deputy PM Kaleba: Ukraine is not Russia’s buffer“.

See also: Why the EU faces budget deadlock and how NYT reporting shines a spotlight on CAP delivery model.

MADRID. Spain’s caretaker socialist PM, Pedro Sánchez, has called on all political parties to “acknowledge” that a third election would not be acceptable.

After Sunday’s election, he said they should commit themselves to unlock the current political stalemate, created after the 28 April election, which was won by Sánchez’s socialist party PSOE, but without the required majority to form a stable government, EURACTIV’s partner EFE reported.

In an interview with public radio station RNE on Wednesday (6 November), Sánchez asked the conservatives of the Partido Popular (Popular Party, PP) and centre-right party Ciuidadanos (Citizens) to explore the possibility of a “technical abstention”. If PSOE wins, it will facilitate “the only possible government: an executive of PSOE”, he added.

All parties are keeping their cards secret on how to unlock the situation after the elections of 10 November, mainly as many polls are predicting a lead for PSOE. Still, as was the case in April, it might not end up obtaining the majority to govern of 176 seats.

Meanwhile, El País reported that thousands of law enforcement officers would be deployed across Catalonia on election day to guarantee security.

The Spanish newspaper quoted sources familiar with the operation as saying that up to 2,500 officers of the National Police and 2,000 members of the Civil Guard will patrol the streets to impede any acts of violence this Sunday (10 November).

“The authorities want to prevent any potential street disturbances such as the ones that followed the Supreme Court’s recent sentencing of nine secessionist leaders to prison terms for their role in the 2017 failed Catalan independence drive,” El País wrote.

Self-satisfaction. Commenting on the mid-term review of the grand coalition (CDU/CSU and SPD) that was presented on Wednesday (6 November) in Berlin, the German government had demonstrated that it is “able and willing to work”, Chancellor Angela Merkel (CDU) said. It is now up to the coalition parties to check whether they see sufficient foundations for further cooperation. “We still have numerous measures, initiatives and projects for the rest of the legislative period,” government spokesman Steffen Seibert added.

In the document, the federal ministries listed projects from the coalition agreement, which are “already in force, in parliamentary procedure or otherwise in the process of implementation” by the middle of the legislative period. The government’s interim assessment is likely to play an important role in the parties’ decision to continue being part of the grand coalition. The social democrats (SPD), in particular, have serious doubts about continuing the coalition. (Claire Stam | EURACTIV.de)

France and China to defend Paris climate deal. In Beijing, French President Emmanuel Macron and Chinese President Xi Ping reaffirmed in Beijing their “strong support” for the landmark Paris Climate Agreement, following the US’ official withdrawal from the agreement. China is the world’s largest emitter of greenhouse gases.

After deploring the American decision, they told reporters that the agreement was “an irreversible process”. “Because when China, the EU and Russia make a firm commitment, the isolated choice of one or another is not enough to change the course of the world. It only leads to marginalisation,” Macron said. The leaders also made a point in favour of multilateralism, saying that “trade wars only result in losers”. (EURACTIV.FR)

Formation fatigue. Flemish citizens would prefer to vote in snap elections (46,6%) than face a yellow-purple federal government with the Liberals, Socialists and N-VA (29.7%) or a green-purple coalition with the Liberals, Socialists and Greens (23.6%), a new poll conducted for ‘Het Laatste Nieuws’ and VTM Nieuws has found. More than half (52%) of the respondents also indicated that their interest in politics had decreased significantly. Contrary to many European countries, the Belgian electoral system makes it difficult to hold new elections, as a time limit does not bind the formation of a government, and the dissolution of parliament requires a majority.  (Alexandra Brzozowski | EURACTIV.com)

Migration compact. The Italian embassy in Tripoli formally proposed Libyan authorities to update the Italy-Libya Memorandum, signed by Gentiloni’s executive and the provisional government of al Serraj in 2017. “The proposal was favourably received, and the Libyan counterpart communicated its willingness to revise the text,” said Interior Minister Luciana Lamorgese before the Italian Parliament.

The memorandum intended to curb migration flows and has been successful in achieving this aim in the past two years. However, it faced criticism from humanitarian organisations for violence against migrants and their living conditions in Libyan refugee camps. (Gerardo Fortuna | EURACTIV.com)

Greece’s migration minister Michalis Chrisochoidis sent a letter to his EU counterparts asking them to help share the burden of 4,000 unaccompanied minor refugees on Greek islands, but just one of them responded. Read more

No visas to the US. As of 11 November, Polish citizens will no longer need to apply for visas to enter the United States. The decision was announced by President Andrzej Duda, together with US ambassador to Poland Georgette Mosbacher during a press conference. (Łukasz Gadzała | EURACTIV.pl)

Bank levy. Ruling SMER-SD party (PES), supported by the SNS party, is proposing to double the bank levy currently at 0,2% to 0,4%. The levy was introduced in 2011 and meant as a contribution to the banking sector and assist it with future crisis resolutions and ultimately be part of the European resolution fund (est in 2015). Meanwhile, the levy is still in place, and the levied finances have also been used elsewhere.

The proposed increase should generate additional €130 million that will finance social programmes, ex-PM and Smer-SD leader Robert Fico said. He added that the banking sector’s profitability is above average, comparing it to the level of “drugs and human trafficking”. The Slovak central bank responded that an increased levy could pose a risk for the financial stability of the banking sector. (Zuzana Gabrižová | EURACTIV.sk)

Spat with Austria over nuclear plants. Czech’s Trade Ministry will go to Brussels at the end of November to talk about a new nuclear power unit in Czechia. The European Commission will probably examine the possibility of unlawful state aid for the construction of a planned unit in Dukovany and Temelín.

New nuclear units are top priorities of PM Andrej Babiš but bordering Austria is opposing it due to security reasons. That is why Austria recently asked the EU executive to examine the matter. Trade Minister Karel Havlíček said that he is ready to clarify the next steps but emphasised that without new power plants, the Czech Republic would not have enough sources of electricity after 2030. (Aneta Zachová | EURACTIV.cz)

Mayor resigns following sex and drugs scandal. Borkai Zsolt, the mayor of Győr involved in a sex scandal on a yacht in the Adriatic, announced his resignation in an open letter to the people of Győr on Wednesday (6 November). Despite the scandal, Borkai, a former member of Orban’s Fidesz party, was reelected in October’s local elections.

New government starts work. Romania’s new centre-right cabinet held its first official meeting on Wednesday (6 November) when it discussed the re-organisation of the government, which is now down to 16 ministries from 24 previously. Also, the government discussed the aids for coal miners affected by the closure of hard coal mines.

New commissioner-designate. The government proposed two names for the position of commissioner – MEPs Siegfried Muresan and Adina Valean – and Ursula von der Leyen chose the latter. She will get the same transport portfolio as the initial candidate pushed by the former socialist government of Viorica Dăncilă.

According to sources, von der Leyen insisted on the need for gender balance although the Romanian government pushed for Muresan.

However, critics have pointed out that von der Leyen did not insist on having a female Commissioner for France, whose new pick is Thierry Breton, replacing the rejected candidate Sylvie Goulard, while in the case of Romania, she insisted on having a woman. (EURACTIV.ro)

Government crisis looming? The radical leftist party, Levica, announced on Wednesday (6 November) that the government withdrew from a cooperation agreement. “Now we are the real opposition”, Levica said. The problem was a new law on supplementary health insurance, which Levica wanted to be abolished.

The Slovenian minority government is a coalition of five parties: four of them are members of RE, and one is socialist (S&D). Levica agreed to support the government, but tensions started in spring with the one-year-old government.

Prime Minister Marjan Šarec (LMŠ-RE) hopes that the cooperation will continue and that Levica will support laws with which it agrees. Still, other members of the coalition said “Levica was not constructive” and that “no party can expect from a coalition to do whatever it likes”. The real test will be the voting about the budget this month. If Levica opposes the budget, Šarec could eventually get into trouble. He can count on votes from the radical right party SNS, which he would not rely on for his liberal-left government to survive. (Željko Trkanjec | EURACTIV.hr)

Croatian police help illegal migrant give birth in the woods. A pregnant Iraqi woman has given birth to a baby girl in the woods near Glina, about 70 km south of Zagreb, after illegally entering Croatia with her husband. She was in an advanced stage of pregnancy, and the police helped her give birth on-site before the ambulance arrived. The husband has expressed his intent to apply for asylum formally.

Half of the LGBT+ community experiences violence. One in two members of the LGBT+ community in Serbia has suffered some form of violence, while more than a third of respondents do not feel protected, a new opinion poll has shown. The most frequent forms of discrimination are humiliation, disrespect, non-acceptance of differences, psychological and physical violence. (EURACTIV.rs)