Sanchez: I can still suspend Catalan autonomy at any time 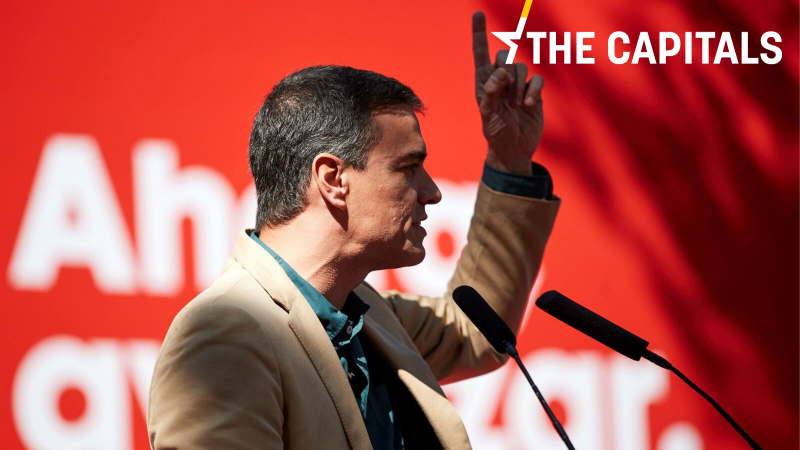 Before you start reading today’s news, make sure you have a look at a Special Edition of The Capitals run by Samuel Stolton, dedicated to the copyright directive, which will help you stay on top of the latest digital issues.

If you’ve missed Tuesday’s extensive grillings of five Commissioner-designates, read up on everything that happened: Commissioner hearings: Urpilainen/Johansson/Kyriakides and Schmit/Wojciechowski. And Georgi Gotev has the story about the missing Hungarian Commissioner.

And if you are a fan of Germany’s most famous white wine, the Riesling, don’t miss today’s special report entry: Riesling will have a very different taste in the future.

Sánchez warns he can suspend Catalan autonomy at any time. Acting Spanish socialist PM Pedro Sánchez warned on Tuesday (1 October) that his government can – if deemed necessary –  suspend the competences of the autonomous government in the Catalonia region (northeast Spain), EURACTIV’s partner EFE reported.

Sánchez reminded that even an acting executive can suspend a Spanish autonomous regional government if that government is not abiding by the law, by invoking Article 155 of the Constitution. The acting government imposing direct rule, as they did on 27 October 2017, when “independence” was declared by Catalan separatists.

“I hope not to get to that extreme”, Sánchez stressed in an interview with Spanish private radio station Cadena SER on Tuesday (1 September), a day that marked the second anniversary of the unlawful “1-O” referendum on the “independence” of Catalonia.

The referendum held on 1 October 2017 was declared illegal by Spain’s Constitutional Court. About 90% of Catalan voters backed independence, but the turnout reached only 43%. The Catalan parliament then declared “independence” unilaterally.

The outcome in the trial of 12 Catalan separatists allegedly responsible for that unlawful declaration will be a headache for the interim and next government.

In case they are found guilty (the outcome will be known by mid- October), the interim cabinet will have to deal with a wave of fierce reactions from the Catalan secessionist camp. Fernando Heller (EuroEFE.EURACTIV.es)

Amazon response to the French Gafa tax: French consumers will have to pay the so-called GAFA (Google, Apple, Facebook, Amazon) tax. The French legislation sets a 3% tax on the profits from providing online sales for third-party retailers, as well as on digital advertising and the sale of private data. This was decided after the EU failed to agree on a global GAFA tax.

In July, Amazon already said that it won’t assume the cost of France’s new digital tax. And on Tuesday (1 October), the American giant carried out these threats by raising the commission on each sale made on its platform by 3%, meaning that on an item for which a referral fee is currently 15%, it will be raised to 15.45%.

“We can analyse this as a provocation as they write it clearly to us: we are being taxed, so we are taxing you. 3% of the margin is something very important for small retailers,” said Xavier Douais, the President of the Trade Section of the Confederation of Small and Medium-sized Enterprises on national radio France Inter. The new tax could ultimately be paid by the consumers.

€19 billion from CO2. Germany’s finance minister Olaf Scholz expects tax revenues generated from CO2 pricing in the buildings and transport sectors to reach €18.8 billion by 2023. This calculation is part of a supplementary budget Scholz is set to present to the federal cabinet today (2 October). It aims at securing the financial framework for Germany’s new climate package with which the government hopes to reach the country’s 2030 climate goals. The legislative package amounts to €54.4 billion for the 2020-2023 period alone. However, Scholz intends to avoid new debt in the federal budget.

Germany’s extreme right is arming itself. A report by the German broadcaster ARD revealed that the police has secured 61% more weapons amongst right-wing extremists than in the previous year. In processing right-wing driven crime, the police found a total of 1,091 weapons. The right-wing extremism expert Matthias Quent of the Institut für Demokratie und Zivilgesellschaft (IDZ) said on tagesschau.de that this shows “a massive armament of the right-wing radical scene”. He believes they are preparing for militant attacks on minorities, political opponents and representatives of the state.  Interior minister Horst Seehofer (CSU) has announced decisive action against this development and wants to strengthen security forces. (EURACTIV.de)

Johnson told the BBC that they would be “absolutely minimal” and “won’t involve new infrastructure”.

However, the plans received a stern rebuttal from Dublin, with Irish Prime Minister Leo Varadkar saying that the UK government should not “impose” customs checks “against the will of the people.” (Samuel Stolton, EURACTIV.com)

Wojciechowski still waiting. Polish Commissioner-candidate Janusz Wojciechowski will have to face another round of questions in the European Parliament, as MEPs were not satisfied with his lacklustre presentation. In particular, he was criticised for failing to present concrete proposals to defend European agriculture in the wake of the smaller share of the EU budget for this portfolio. Wojciechowski said he was willing to face MEPs once more if needed, and that will most probably happen in two weeks. (Łukasz Gadzała, EURACTIV.pl)

Macron asks for more collaboration on migration. French President Emmanuel Macron asked for more EU collaboration on migration, replying to a question on the rise of migrant flows and Turkey’s role, asked by New Democracy MP and former Foreign Minister Dora Bakoyannis (EPP) at the Council of Europe’s Parliamentary Assembly in Strasbourg on Tuesday (1 October). The protection of the EU’s borders cannot burden the entry countries alone, the French President said, adding that EU countries must share the cost of protecting the borders and noted that France commits to the increase of Frontex’s budget and staff. Macron also called for a unified European policy focusing on the needs and problems of countries of origin for migrants, at the eastern borders of the Mediterranean, and for continuous European coordination.

Draghi honoured in Athens: European Central Bank (ECB) President Mario Draghi was honoured on Tuesday by the Academy of Athens, the most prestigious scientific institution of the country, for his role in rescuing the European economic and monetary union, as well as for his response and actions in dealing with the debt crisis in the eurozone. In his address to the Academy, Draghi spoke on stabilising policies in a monetary union, emphasising true convergence as an important factor for cohesion in the monetary union. He also defended the policy of negative interest rates and quantitative easing that the ECB had adopted, and said these policies should be applied for the long-term. (Theodore Karaoulanis, EURACTIV.gr)

ANO still on the top. Ruling party ANO (RE) of PM Andrej Babiš has the biggest support among Czech voters (30 %), with the Pirates with 13 % (Greens/EFA) and the Civic Democrats (ECR) with 12 % trailing behind. According to a survey by Public Opinion Research Centre, three pro-European parliamentary parties – STAN, KDU-ČSL, TOP09 (all three in EPP) – could face difficulties in case of elections as they are only being backed by less than 5% of the voters. (Aneta Zachová, EURACTIV.cz)

Romania proposes MEP for Commissioner: The ruling socialist party PSD chose Dan Nica, a veteran MEP, as Commissioner-designate, after the rejection of Rovana Plumb in the JURI Committee of the EU Parliament. Nica and Plumb have been the two proposals the Romanian government sent to Ursula von der Leyen for commissioners, and the President-elect had initially selected Plumb for the Transport portfolio. (EURACTIV.ro)

More bankruptcies. After consecutive years of decline, there was an increase in the number of bankrupt companies in Bulgaria in 2018, according to a business study quoted by “Dnevnik”. Bulgaria ranks second in terms of bankruptcy growth among Central and Eastern European countries. The reasons are higher debts, increasing labour costs, cyclicality of the economy and poor management. (Krassen Nikolov, EURACTIV.bg)

Fraud in using EU funds for handicapped Investigators from the National Investigation Bureau (NPU) in the Celje and Ljubljana area conducted seven house investigations on suspicion of fraud in using EU funds. Pre-trial proceedings are pending against two persons, who allegedly obtained around €300,000 worth in property through a public tender by the Ministry of Labor, Family, Social Affairs and Equal Opportunities. According to our unofficial information, the investigated Griffin business group employs people with disabilities. (Željko Trkanjec, EURACTIV.hr)

Međimurje County head resigns from HNS party Matija Posavec, one of the most popular members of liberal party HNS (RE), announced that he had resigned from the party after being a member for 15 years. Posavec led the HNS list in the EU elections but failed to get a mandate. HNS is a member of the governing coalition with HDZ (EPP) and Posavec was against it from the beginning. According to polls, HNS can not enter the Sabor (Croatian Parliament).  (Željko Trkanjec, Euractiv.hr)

€3,5 billion investment in railway infrastructure by 2030.  Transport Minister Oleg Butković announced yesterday that some €3.5 billion will be invested in the railway infrastructure by 2030. The key question is a new railway from Zagreb to Rijeka, the biggest cargo port. There are two possible models for building it: the first is a concession, which is a less favourable model for Croatia, but it is realistic and achievable through EU funds. The European Commission was not in favour of such an option initally, but there have now been positive signals that in the new financial perspective, this project could also be financed from European funds. (Željko Trkanjec, Euractiv.hr)