Schäuble says saving lives should not be paramount concern 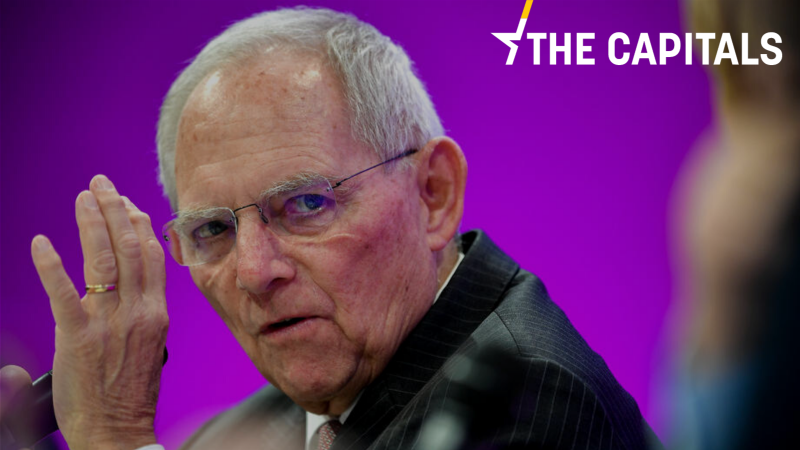 Schäuble: "We must not leave decisions to the virologists alone". [EPA/SASCHA STEINBACH]

Before you start reading today’s edition of the Capitals, feel free to have a look at the interview with Noam Chomsky conducted by EFE’s Cristina Magdaleno: COVID-19: The latest massive failure of neoliberalism.

China pressured EU to drop COVID disinformation criticism. China sought to block a European Union report alleging that Beijing was spreading disinformation about the coronavirus outbreak, according to four sources and diplomatic correspondence reviewed by Reuters.

BERLIN. Over the weekend, Bundestag President Wolfgang Schäuble of the Christian Democratic Union (CDU) advocated for a more even calculus between public health and the economic and social consequences of a prolonged shutdown, fearing an overload of state capacities. He also disagreed with subordinating all other concerns to the goal of saving lives, claiming “this in its absolutism is not correct,” as the German constitution’s right to human dignity “does not exclude the possibility that we must die.”

“We must not leave decisions to the virologists alone, but must also weigh up the enormous economic, social, psychological and other implications. To simply shut everything down for two years would have terrible consequences,” he told EURACTIV’s media partner Der Tagesspiegel in an interview published Sunday (26 April).

Meanwhile, in a win for privacy advocates, officials now say that the controversial coronavirus tracker app will not centrally store data. Instead of storing data in a centrally managed server, government officials will advocate for information to be kept locally on the user’s device, Health Minister Jens Spahn (CDU) and Head of the Chancellery, Helge Braun, confirmed on Sunday (26 April). The government is currently in discussions with Google and Apple about creating the corresponding app, but this move eliminates one of the core points of contention. (Sarah Lawton | EURACTIV.de)

Read more about the COVID-19 situation in Germany, read here.

Governments bailout airline company with €10 billion. Air France-KLM will get a state-backed bailout of around €10 billion in loans and guarantees. But the lack of strict conditions in the aid packages announced by the French and Dutch governments on Friday (24 April) has already stoked criticism. EURACTIV’s Samuel Morgan has more.

To stay abreast on the coronavirus situation in France, click here. Also, check out last week’s Special Edition of the Capitals, which looked into how the COVID-19 health crisis has heavily impacted Europe’s airlines.

Dutch spell out green ideas for EU recovery fund. The Netherlands has floated proposals to ensure a green recovery from the COVID-19 crisis in the European Union, suggesting an “exclusion list” of economic activities like nuclear power, which they believe should be banned from receiving EU funds. Davine Janssen has the story.

Deconfinement in three phases. While current lockdown measures will continue until 3 May, Belgium is to begin a gradual deconfinement with an exit strategy to be rolled out with the key dates of 4, 11 and 18 May, as well as 8 June, the National Security Council decided before the weekend. While the dates are “not set in stone”, the government “cannot rule out having to take a step back if the virus should flare up again,” Prime Minister Sophie Wilmes told reporters. Alexandra Brzozowski has the details of the deconfinement plan.

More details about the COVID-19situation in Belgium here.

Greens on board? More than two months after an inconclusive general election, the Green Party could sit down with the leaders of Fianna Fáil and Fine Gael next week in a bit to help form a new government, Taoiseach Leo Varadkar has said. Samuel Stolton has more.

Barnier: UK is derailing post-Brexit trade pact. A frustrated Michel Barnier, the EU’s chief Brexit negotiator, came close to accusing London of derailing talks on a future EU-UK trade pact on Friday (24 April), warning that there were “serious difficulties ahead” if a ‘no deal’ scenario is to be avoided in two months’ time. Benjamin Fox reports from London.

VAT becomes a loan. The Finnish government is suggesting a plan whereby the value-added tax (VAT) paid in the earlier part of 2020 could be reimbursed to businesses. The country’s parliament will receive a government proposal in a fast-track procedure. EURACTIV’s Pekka Vänttinen takes a closer look at the government’s proposal.

Read here to understand the situation in Finland better.

Easing the lockdown. Italy’s PM Giuseppe Conte announced on Sunday (26 April) that Italy will enter its second phase of lifting the lockdown on 4 May. “We’re easing the lockdown, but we want to keep the situation under control,” the PM said. While the ban on gatherings will persist, people will be allowed to visit relatives in small numbers, yet burial ceremonies can be celebrated with a maximum of 15 people attending. Read more on Italy’s country update. (Gerardo Fortuna | EURACTIV.com)

Kids allowed to walk and play outside. Spain’s streets awoke to the sound of children walking and playing outside again on Sunday (26 April) after strict measures in place since 14 March banned them from leaving the house, save in exceptional circumstances. While Spain continues to record a downward trend with more recoveries than new infections for a third consecutive day, as well as fewer deaths, Fernando Simón, head of the Health Emergency Coordination Center, told reporters Sunday “that there will be no problem next week in applying relief measures.” EURACTIV’s partner EFE reports.

More details about the COVID-19 health crisis in Spain here.

Demand for healthcare services dropped during pandemic. Demand for the services of Greece’s state hospitals and other healthcare providers has dropped sharply, in some cases by as much as 85%, during the COVID-19 pandemic. At the same time, demand for medical advisory support online or over the telephone has soared by as much as 300-450%, Yiannis Kyriopoulos, a professor of health economics, told the Athens-Macedonian News Agency in an interview released on Sunday.

Crisis handled? The Czech Republic has managed to get the coronavirus health crisis under control and can now focus on returning back to normal, the head of the Institute for Health Information and Statistics, Ladislav Dušek, told Czech TV on Sunday (26 April).

“Tests show us every single day that the spreading is not uncontrollable and is even slowing down,” Dušek said, admitting that the pandemic could nonetheless return, although maybe only locally, but that Czechs were well prepared for it. (Ondřej Plevák | EURACTIV.cz)

For more information on the Czech Republic and its response to the pandemic, check here.

EU-US relations to benefit from more autonomous Europe. In one of his first interviews since taking office, the new Minister of Foreign and European Affairs, Ivan Korčok, said he considers “the way the US administration defines its relationship with the EU to be a problem.” Zuzana Gabrižová reports from Bratislava.

Money in advance. Bulgaria will request that the European Commission allow the post-2021 European funds for the country to be used in advance – between seven and eight months ahead of the scheduled time. This was announced on Friday (24 April) by Deputy Prime Minister Tomislav Donchev, who thinks this is an option to overcome the crisis more easily.

The government is checking if it is possible to use the money from the rural development programme earlier. The most serious problem with this plan is that the new EU budget has not yet been adopted. The EU’s MFF (long-term budget) is fundamentally reshaped by the coronavirus crisis. “We are distributing money that is not available at the moment,” Prime Minister Boyko Borissov commented. (Krassen Nikolov | EURACTIV.bg)

More than 11,000 cases. As of Sunday (26 April), Romania registered a total of 11,036 COVID-19 cases as 400 new cases were recorded that day. Of the total number of cases, 608 have died, while 3,054 are considered to have recovered. While public health authorities had announced almost 10,000 new test results on Sunday (26 April) compared with Saturday (25 April), they nevertheless noted that not all tests had been performed in the past 24 hours. This means the daily testing rate remains at about 8,000. (EURACTIV.ro)

Slovenia worries about 1 May confinement slip-ups. 15 new coronavirus cases were detected in Slovenia on Saturday (25 April), more than was registered on Thursday, which Dr Milan Krek of the national public health institutes said indicates that people did not observe confinement and distancing around the Easter period. With a new long weekend approaching, there are reasons for concern. EURACTIV’s Zoran Radosavljevic has the story.

€400 million organic farming debt? Croatian Agriculture Minister Marija Vuckovic has dismissed media reports that only 2% of EU funds paid to Croatia for organic farming is justified and that as much as 98% of organic farming in the country is fake and will have to be paid back.

Antun Vrakic, owner of the Agro-Palm company and board member of the Croatian Chamber of Agriculture (HPK) claimed in the Vecernji List daily on Saturday (25 April) that Croatia will have to pay back 3 billion kunas (€400m) to the EU because inspectors from Brussels have found that only 2% of the funding can be justified and the rest of organic farming is not genuine. Karla Juničić reports from Zagreb.

Elections after the pandemic. Elections will take place in Serbia once the country overcomes the coronavirus pandemic, President Aleksandar Vucic said on Saturday (25 April). He said he would discuss the topic of elections with all those who had earlier said they would take part in the run, adding that he has nothing to object to if someone else would be willing to take part in the elections. EURACTIV Serbia has more.

In other news, Serbian President Aleksandar Vucic said on Saturday (25 April) that medical supplies sent by Belgrade to Italy were a way for Serbia to thank Italy for assisting and supporting the country earlier. Read more.