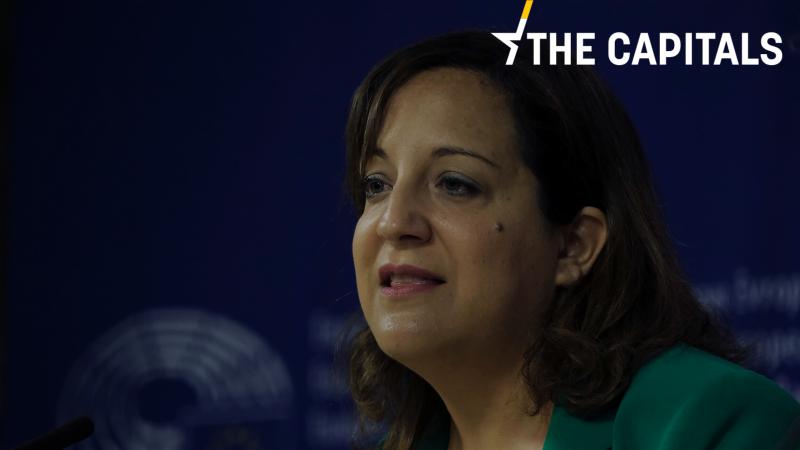 Iratxe García: "Beyond any political consideration, the Catalan society is now divided, and we must open new spaces for the wounds to heal." [Shutterstock]

Before you start reading today’s edition of the Capitals, we invite you to read the story “Europeans alarmed as US mulls pull-out of yet another arms control treaty” as well as a study , which found that the top 20 world footballers responsible for over 500 tonnes of CO2 emissions.

Also, feel free to have a look at the article written by Gerardo Fortuna: Commission, Finnish presidency clash with member states over CAP convergence

STRASBOURG / MADRID. A progressive government between socialist PSOE and leftist Podemos will try to reduce social tensions in divided Catalonia, Iratxe García, leader of the Socialist and Democrat group in the European Parliament (S&D) told EURACTIV.com in an interview.

“Beyond any political consideration, Catalan society is now divided, and we must open new spaces for the wounds to heal. Far from feeding confrontation, PSOE and Podemos will try to contribute to building bridges,” García said, expressing her optimism and hope that the new government will be in place soon.

A close ally of Spain’s acting PM Pedro Sánchez, García said that the “progressive” agenda of such a government, prioritising the ecological transformation, would create new opportunities for all.

See the full interview here: We hope to cooperate with the Greens on EU legislation

In the meantime, EURACTIV’s partner EuroEFE reported that the Catalan separatist party ERC (Republican Left of Catalonia) clashed on Wednesday with PSOE on ERC’s political demands and the date to sign an agreement which would allow the investiture of Sánchez’s government.

Sources close to both parties said on Wednesday an agreement was “in reach”, and could even be concluded before the end of the year, but politically sensitive details remain on the negotiating table, EFE reported.

Minister increases classification of files in investigation against him. Andreas Scheuer (CSU), traffic minister and subject of a parliamentary investigation into allegations that he mismanaged public funds, had promised “maximum transparency” and even personally (and publicly) handed over the necessary files to the investigators. But many of these files have subsequently been classified as “secret”, meaning that while lawmakers can still look into them, the public cannot.

Austrian parliament approves climate plan, leaves door open for CO2 tax. Having passed this hurdle, the plan will now be sent to Brussels. The measures include tighter speed control on roads, electrification of taxis and boats, and a reform of housing towards more compact settling areas. The price of these measures is estimated between €166 billion and 173 billion until 2030. But is it enough? See more (Philipp Grüll | EURACTIV.de)

Al-Hol camp causes government turmoil. After months of circling around the issue, the Finnish government finally made a political decision on how to deal with some 40 Finnish citizens in the Al-Hol refugee camp. Some 11,000 foreign women and children are being held at the camp in Syria, most of them family members of Isis fighters.

The aim is to repatriate the children as quickly as possible, while the status of the mothers in the Syrian camp will be left to public officials to decide. However, the case has caused severe turmoil within the Finnish government. (Pekka Vanttinen, reporting from Finland)

EPP Chairman Manfred Weber was unambiguous in his message that Muscat should step down immediately. However, during a debate earlier in the week, Socialist MEPs were reluctant to call for Muscat to step down, with the exception of French socialist MEP Raphaël Glucksmann.

>>Read also: Where is Malta’s Article 7?

‘Unusable’ upgrade. The Belgian army is in trouble after 44 of their armoured reconnaissance vehicles, which were undergoing an upgrade of more than €31 million, became unsafe to use, according to the Ministry of Defence’s internal documents. Alexandra Brzozowski has the story.

Irish Ombudsman. Ireland’s Emily O’Reilly has been approved as the European Ombudsman by MEPs in Strasbourg, after fending off competition from Estonian Judge Julia Laffranque. O’Reilly secured 320 votes and will serve her second term in the post, in which she is responsible for investigating possible cases of maladministration by the EU institutions. Samuel Stolton has the story.

Labour’s nightmare before Christmas. Less than a week after suffering their worst defeat in a generation, Labour party staff were warned on Wednesday that hefty job cuts are set to be made at party headquarters. Benjamin Fox reports from London.

Salvini risks trial (again). An Italian tribunal has asked the parliament to authorise an investigation into former Interior Minister Matteo Salvini over allegations of kidnapping. According to the magistrates, he refused to let the migrants on Italian coast guard ship Gregoretti disembark in July. Read more about the issue (Gerardo Fortuna | EURACTIV.com)

MEPs worried about police extreme violence. 33 MEPs, including Ska Keller from the Greens, have sent a letter to the Greek government expressing their concern about increasing incidents of extreme police violence against citizens.

New wave of protests against judicial reforms. Several thousand people demonstrated in front of the parliament and in other cities in Poland against the attack on the judiciary by the ruling PiS on Wednesday. A PiS bill aims to subjugate judges, a move that has been struck down by the European Court of Justice and Polish Supreme Court. (Łukasz Gadzała | EURACTIV.pl)

Moratorium on moratorium. Slovakia’s Constitutional Court has ruled to suspend the 50-day moratorium on opinion polls ahead of elections. That means it will not apply before the upcoming 2020 parliamentary election. The Court is still to decide on the constitutionality of the measure, which president Zuzana Čaputová brought before the Court. (Zuzana Gabrižová | EURACTIV.sk)

Expected visit. A delegation of the European Parliament’s committee for Budgetary Control (CONT) is going to visit the Czech Republic in February 2020. The purpose of the visit is to check whether the country improved its management of EU funds and implemented recommendations issued to the country in 2014. The findings in 2014 included concerns about possible conflict of interest of PM Andrej Babiš, at the time serving as Finance Minister. (Aneta Zachová | EURACTIV.cz)

An apology. Bulgarian MEP Angel Dzhambazki has offered an apology for his remarks about the chairman of the Transport Commission, Karima Delli, whom he described as “French-Algerian” and Ismail Ertug, described as “Turkish-German”.

Budget responsibility. Romania’s government plans to take responsibility for the 2020 budget, using a procedure that avoids parliament debates in the process of adopting the law. This would be the first for Romania, but the centre-right government said this is the only way it could deliver a budget by the end of the year.

Bogdan Neagu from EURACTIV Romania has the story.

Crucial debate. Croatia’s National Television (HRT) hosted the first and last presidential debate with all 11 candidates competing to get to the second round of the presidential elections this Sunday. Even though the incumbent president Kolinda Grabar-Kitarović (HDZ, EPP) has  been under fire over controversial statements that went viral and have severely damaged her popularity, most political pundits agree that she performed well on the stage. Nevertheless, she caught a lot of heat for accusing the Security and Intelligence Agency (SOA) for corruption, which sparked a media outburst the day after.

Read the analysis of Tea Trubić Macan from EURACTIV Croatia.

7% growth possible with ambitious reforms. Serbia could achieve long-term growth of 7% per year and double its per capita income over the next 10 years, if it implemented a new ambitious reform program, the World Bank has said. (EURACTIV.rs)