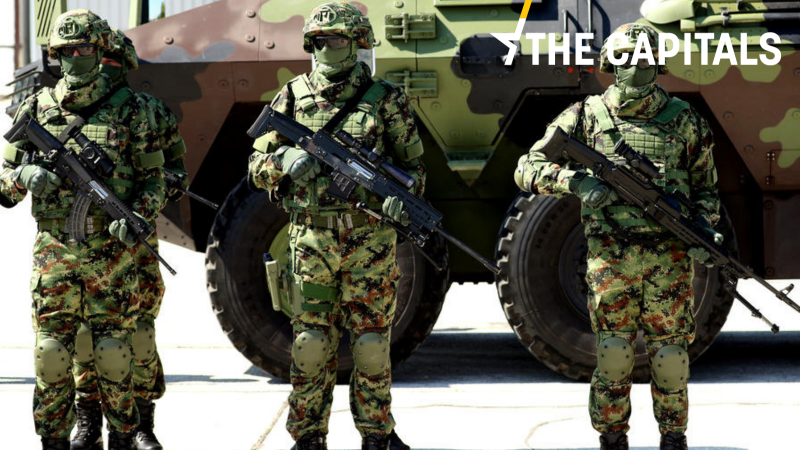 Before you start reading today’s edition of the Capitals, feel free to have a look at Jorge Valero’s obtained leak on the EU to create ‘superbody’ of watchdogs to oversee digital currencies.

The EURACTIV Network is back from the summer holidays to keep you up-to-date with how Europe’s capitals are dealing with changing travel restrictions and varying epidemiological situations. Click here to find out more about what’s going on in your capital.

Serbia suspends military activities blaming ‘horrible’ EU pressure. Serbia’s government has decided to suspend all military exercises and activities with all of its partners for the next six months to preserve its position of military neutrality, Serbia’s defence ministry announced on Wednesday (9 September), only a day ahead of the beginning of the Slavic Brotherhood 2020 exercise to be hosted by Belarus. EURACTIV Serbia has the story.

Scholz questioned over Warburg scandal. Finance minister and chancellor candidate for the Social Democrats (SPD), Olaf Scholz, was questioned on Wednesday (9 September) about his meetings with a bank executive involved in Germany’s largest tax fraud scandal during his time as Mayor of Hamburg. Read more on this here.

Members of the opposition accused Scholz of lying about his meetings with Christian Olearius, head of the bank MM Warburg, who was under investigation at the time of their meeting in 2016. Scholz defended himself, saying that “the question is not whether we meet, but whether we allow ourselves to be influenced. I want to say that I can be very stubborn.” (Sarah Lawton | EURACTIV.de)

Meanwhile, German antitrust authorities will soon have more power over the online giants. The cabinet passed a new amendment to the country’s 62 year-old Act against Restraints of Competition, which is expected to be passed by the Bundestag before the end of the year. Learn more in the latest from Philipp Grüll.

Norway arrests suspect in 1982 Rue des Rosiers bombing. Norway’s anti-terrorist police (PST) confirmed on Wednesday (9 September) they had arrested a suspect linked to a 1982 attack on the Jewish Community in Paris that had left six people dead and 22 injured.

Since 2015, France has been requesting Norway’s consent for the extradition of Walid Abdulrahman Abu Zayed, who has been living in Norway since 1991, as well as three other suspects, based in Jordan and the West Bank. More details here.

1 in 4 Belgians want to split their country. Around 28% of the Flemish people are in favour of dividing the country along regions, as are 18% of the Walloons and 17% of the inhabitants of Brussels, according to a recent poll conducted by the Dedicated Institute for Soir Mag.

More than half of those questioned believe that it will not be possible to maintain a unified country in the future, with 58% in Wallonia and 56% in Flanders, and Brussels (46%) expecting a breakup in the future. 48% of respondents are in favour of a status quo and powers divided between the federal level and the sub-entities. (Alexandra Brzozowski, EURACTIV.com)

COVID-19 infection rate back to April-level. As Austria recorded 563 new COVID-19 cases within the past 24 hours on Wednesday (9 September) and close to 600 new infections the day before, the country’s daily infection rate has reached a level that was last seen in April.

“For me personally, these numbers are too high”, Austrian health minister Rudolf Anschober has said. Vienna and Tyrol are the regions with the highest new infection numbers.

Sweden’s populist party fit to govern, say 42% of right-wing voters. Of the people voting for the two right-wing parties in parliament – the New Moderates and the Christian Democrats – 42% would be ready to accept the right-wing populist party, the Sweden Democrats, in the same government, according to a recent survey by newspaper Dagens Nyheter published on Wednesday (9 September). Read more.

Conte promises that schools will reopen regularly. “We worked tirelessly to assure that students could return safely to school. This year the context is new for everyone, but thanks to our work the school year will start regularly on 14 September”, said Italian Prime Minister Giuseppe Conte in an attempt to address the increasing worries about the safety of students and teachers returning to school. Read more.

Portugal records highest daily spike since April. Portugal registered 646 new daily cases of COVID-19 on Wednesday the highest spike in daily cases since 20 April. The Portuguese health authorities say the increase is due to the return of vacations and increased mobility. (Helena Neves, Lusa.pt)

Dialogue with Turkey or sanctions. “If Turkey refuses to see sense by the next EU summit on 24 September, I see no option but for my fellow European leaders to impose meaningful sanctions,” Greek PM Kyriakos Mitsotakis wrote in an op-ed published in several EU media.

“Because this is no longer just about European solidarity. It is about recognising that vital interests – strategic European interests – are now at stake. If Europe wants to exercise true geopolitical power, it simply cannot afford to appease a belligerent Turkey,” he added.

Read also: The Brief – Moria burns, and solidarity with it

Huawei fears it may be excluded from Poland’s 5G network. Poland’s planned criteria for assessing the risk of telecoms equipment providers are political and may be aimed at excluding Huawei from developing the country’s 5G network, the Chinese company said on Wednesday (9 September). Read more here.

Prague placed on high-risk list after Covid-19 spike. Belgium and Germany decided on Wednesday (9 September) to place Prague on their lists of high-risk regions after the number of daily COVID-19 cases surpassed the 1,000-mark for the first time since the pandemic started.

The same day, Czech health minister Adam Vojtěch announced the reintroduction of country-wide obligations to wear face masks in indoor spaces, though this will not affect classrooms. However, no economic measures to curb the spread of COVID-19 will return, as the country cannot afford them, Prime Minister Andrej Babiš has said. (Ondřej Plevák | EURACTIV.cz)

More COVID-19 hospitalisations than during first wave. The number of people hospitalised for COVID-19 in Slovakia has exceeded the occupancy rate from the first wave of the pandemic as numbers reached almost 100 as of Wednesday. At the same time, new rules for mass events will enter into force starting Thursday (10 September), allowing a maximum of 1,000 people at a time for outside events and 500 for indoor ones. (Zuzana Gabrižová | EURACTIV.sk)

“The moment a vaccine is scientifically verified as the right vaccine against the coronavirus, we will have it at our disposal, just like Germany, France and other EU member states will,” Plenković told Croatian Radio in an interview. (Karla Junicic | EURACTIV.hr)

Sour grapes in Slovenia over EU court’s wine ruling. Slovenia said it was disappointed Wednesday (9 September) that an EU court failed to back it in a wine dispute with Croatia, a neighbour with which relations have been sour for years.

The EU General Court (ECG) upheld an EU act that allows Croatian winemakers to use the name “Teran” under strict conditions, although it had been a protected designation for Slovenian vintners since Ljubljana joined the bloc in 2004. (EURACTIV.com)

School to start in-class and online. Students in Romania will be attending classes for the start of the new school year as of 14 September unless the number of COVID-19 cases passes a certain threshold, in which case courses will be held online, Romanian authorities decided. In other cases, half of the students will attend class, while the rest will stay home and take courses remotely. Read more.

Borissov refuses to stand down. “The mafia wants the government to resign,” said Bulgarian Prime Minister Boyko Borissov on Wednesday (9 September), adding that because criminals were behind the protests against him, he no longer wants to resign. EURACTIV Bulgaria has more.