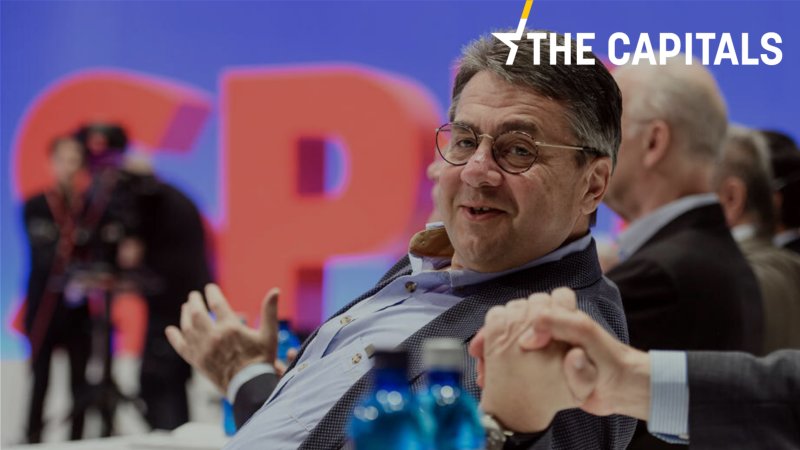 Cansel Kiziltepe, the deputy spokesperson for financial policy for the SPD parliamentary group, did not mince her words. [EPA/CLEMENS BILAN]

***Before you start reading today’s edition of the Capitals, we invite you to read an interview with Eurogroup President and Portuguese Finance Minister Mario Centeno conducted by EURACTIV’s Jorge Valero on the sidelines of the World Economic Forum in Davos.

Also, feel free to have a look at the Special Report “Bioeconomy in the CAP’s nine objectives“.

Former vice-chancellor joins Deutsche Bank’s board. Former chair of the Social Democrats (SPD) and ex-Vice-Chancellor and Foreign Minister Sigmar Gabriel, was appointed by Deutsche Bank on Friday (24 January) to join its board of directors. His nomination will be put to a vote during the Annual General Meeting on 20 May.

But why did his nomination cause such a stir? EURACTIV Germany’s Sarah Lawton digs deeper.

In other news, the German Military Intelligence Service is investigating around 550 cases of right-wing extremism within its ranks, according to a media report released over the weekend.  The agency opened 360 new cases during the course of 2019 and will publish its first annual activity report in 2020, the president of the Military Counterintelligence Service has said.

Landslide victory for social democrats in state elections. In yesterday’s elections in the state of Burgenland, the Social Democrats obtained 50% (up 8 percentage points), earning an absolute majority. The win bucks the party’s recent downward trend: it obtained a record low of 21.2% of the votes in the recent national polls and has been falling behind the Greens in the polls ever since. But how come they were successful this time around? EURACTIV Germany’s Philipp Grüll has more.

No more Gare du Nord? LREM candidates for the Paris town hall, Benjamin Griveaux and Cédric Villani suggested over the weekend to move train stations from Paris to the suburbs. While Villani would like to see Gare du Nord in Saint-Denis, Benjamin Griveaux wants to move Gare de l’Est. Both ideas would make travel more difficult for those coming from Brussels and Strasbourg. EURACTIV France reports.

Arms exports ban. Three Belgian NGO’s Human Rights League, the anti-war action group Vredesactie and the peace and democracy defence union CNAPD have taken the federal government, and its federal finance minister Alexander De Croo (Open VLD), to court in Brussels in a bid to freeze and prevent any Belgian arms sales to Saudi Arabia for six months. Alexandra Brzozowski has the story.

From positive to stable. Credit rating agency Fitch Ratings has downgraded Finland’s Issuer Default Rating (IDR) to AA+, from positive to stable. This is a reminder of Finland’s growing debt and worsening demographic trends. According to the agency, fiscal policy has remained too loose despite a cycle in which medium-term growth continues to be weak and healthcare reform is not being carried out.

Will Brexit see European division at the UN Security Council? In a recent UN Security Council vote on extending cross-border aid to Syria, Britain aligned with the United States and abstained in a rare split with its European partners that could herald others to come after Brexit. Read more.

Meanwhile, the government is set to launch a fast-track visa scheme for scientists, mathematicians and researchers next month. Currently, EU researchers account for about half of the total UK scientific workforce of 211,000, a number that is likely to fall once freedom of movement ends after Brexit. Critics say that the new scheme will not be sufficient to avoid numbers of scientists and researchers falling.

The Global Talent visa will be open from 20 February to those who work in a qualifying field and have been endorsed by a recognised UK body (Benjamin Fox, EURACTIV.com).

But what else did the Spanish minister tell Guaidó after his European trip to Davos, Brussels and Madrid? EURACTIV’s partner EFE reports.

Centre-left relief. The Democratic Party (PD) breathed a sigh of relief as the attempt of right-wing leader Matteo Salvini to take over the “red” Emilia-Romagna failed. Pushed by the ‘sardines’ movement, PD candidate Stefano Bonaccini defeated Lega’s Borgonzoni in crucial regional elections, limiting the pressure on the government coalition from Salvini. Gerardo Fortuna has more detail.

Juncker says he saved Greece. In an interview with journal Kathimerini, former EU Commission chief Jean-Claude Juncker said Greece could have been expelled from the eurozone in 2015 if he had not stepped in to smooth out tensions between Athens and other member states. He also said Varoufakis did not play an important role throughout this period. “I think I shouldn’t have spent more than ten minutes with him. This time was of course enough to write books.”

Pipeline speeds up works. Interconnector Greece – Bulgaria (IGB) gas pipeline is speeding up, as both sides urge the construction companies to finish the works before October 2020. According to Euractiv.gr media partner economix.gr, both governments see an opportunity for better market results with the construction of the Floating Storage Regasification Unit, outside of nearby Alexandroupolis Port. (Theodore Karaoulanis, EURACTIV.gr)

New leadership. The Christian Democrats (KDU-ČSL, EPP) and the Greens elected their new leaders after their respective party congresses this weekend. While former agricultural minister  Marian Jurečka took the leadership spot for KDU-ČSL, the Greens, who are not currently represented in the Czech parliament, voted for Magdalena Davis and European Greens committee member, Michal Berg. (Aneta Zachová | EURACTIV.cz)

Severe pollution. The Bulgarian prosecutor’s office has launched an investigation on Saturday (25 January) into a case of severe pollution that killed tons of fish in Maritsa River. EURACTIV Bulgaria’s Krassen Nikolov has more details.

Rule of law mechanism for all EU member states. Romanian Justice Minister Catalin Predoiu spoke at the informal meeting between justice and home affairs ministers about the creation of a mechanism for evaluating the judiciary and the rule of law in all EU member states in a bid to detect attempts that undermine the rule of law and the fight against corruption. Romania, together with Bulgaria, are the only countries monitored by the EU under the Cooperation and Verification Mechanism (CVM). (EURACTIV.ro)

More trouble within the ruling party. Sources have confirmed that following a secret government meeting held on Saturday, Health Minister Milan Kujundžić (HDZ, EPP) is expected to resign on Monday (27 January) following allegations that he did not properly declare his property expenses.

But what does that mean for ruling party HDZ? EURACTIV Croatia’s Tea Trubić Macan reports.

Railway service between Serbia and Kosovo. US President Donald Trump’s special envoy for normalisation talks between Belgrade and Pristina, Richard Grenell, said that “a deal to restore railway traffic between Serbia and Kosovo is important for both states”. Details of the agreement would be revealed at a meeting on 27 January, the US envoy said in Belgrade. (EURACTIV.rs)

The US warns against 5G security. Robert Strayer, the US Deputy Assistant Secretary of State for Cyber and Communications, said that the government and the private sector should take care when choosing the providers of equipment for the development of 5G network and services so that it could protect itself against cyber attacks and data insecurity in a timely fashion.

But what did Strayer have to say about China’s plans for 5G expansion? EURACTIV Croatia’s Željko Trkanjec looks into it.

In other news, Slovenian MEP Ljudmila Novak (EPP) was attacked after voting against Hungarian Prime Minister Viktor Orbán. After the MEP from the country’s smaller opposition-party, NSi, voted in favour of the European Parliament resolution calling for concrete recommendations and set deadlines for Poland and Hungary regarding their judicial independence and rule of law situation, she was met with furious attacks from SDS, the country’s largest opposition party which happens to have excellent relations with Orbán and Fidesz, and labelled as “a peasant trying to play political chess”. (Željko Trkanjec | EURACTIV.hr)

Tourists from Wuhan to enter BiH. Border authorities still do not have any specific instructions on how to deal with a bus carrying Chinese tourists from Wuhan, where the coronavirus epidemic first broke out. The bus is on its way from Croatia, as none of them had any symptoms after entering the country. (Željko Trkanjec | EURACTIV.hr)

Chinese workers monitored. Workers from China (from the China Road and Bridge Corporation, CRBC) building a highway in Montenegro have been subject to increased monitoring and increased precautionary measures due to the possible spread of the coronavirus. (Željko Trkanjec | EURACTIV.hr)